Constructed for the Changwon Suclpture Biennale 2012 held in Changwon city, South Korea the Brick-Pod Pavilion defines architecture as ‘a sculpture with interior space’, and attempts to create a dome with black bricks which has been used for traditional architecture here in Korea. Designed by Kazuya Morita Architecture Studio, you can enjoy the breezing air, moving leafs, and sparkling sunshine through its numbers of the openings, feeling much more sensitive than when we are outside. More images and architects' description after the break.

By using only 15mm thickness brack brick, we tried to make it not like a heavy and massive dome as usual masonry architecture does. The dome has a 4.5m hight, 3.3m diameter, 0nly 30 mm in thickness, which means it is much thinner than an egg shell which normally has 0.4mm on 40mm diameter.

The history of the dome architecture, represented with Pantheon in Rome, or Hagia Sofia in Istanbul, was the history of technical evaluation for pursuing the creation of the interior space to make it more bright and more ephemeral.

For the construction of the brick-pod, we used the ‘catalan vault’ technique, which is traditional the masonry technique that has been used for long centuries in Spain. First, we formed the dome shape by 15mm thick brick and then we applied glass fiber reinforced cement on it by the trowel which is the technique came from Japanese plastering.

We can truly say this dome represents a new achievement of Korean brick architecture realized by the mixture of far east and far west construction technique on the Eurasia continent. 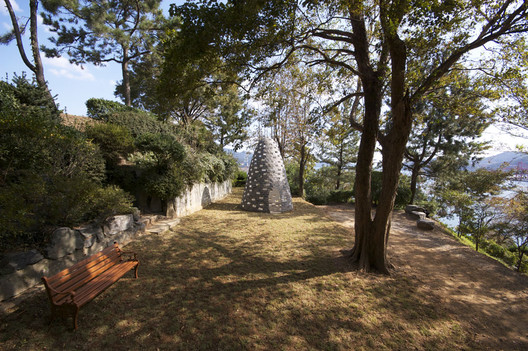