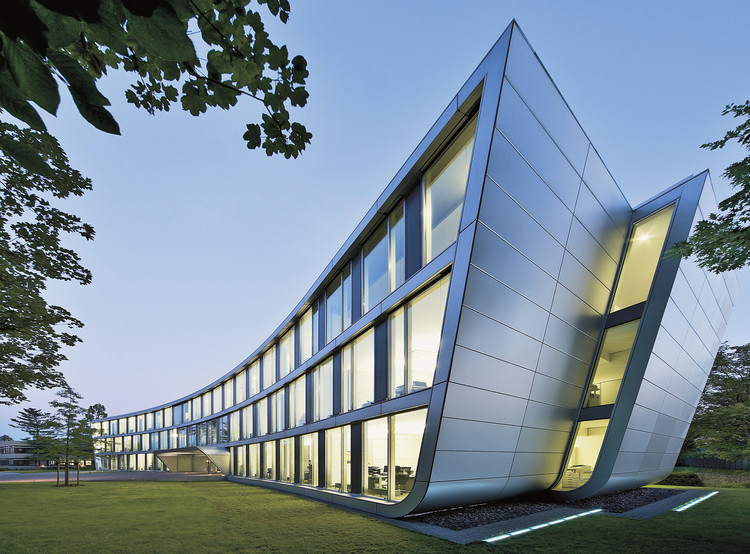 Given a flat property lacking what is generally called “historical context,” there is only one genuine architectural option, and that is to place a highly ambitious building onto the site that is both functional as well as aesthetically pleasing. This was the approach conceived for the administrative building constructed for Stadtwerke Neuss, the municipal utility company. The building is located in a densely built, even congested commercial area occupying both sides of the Konrad-Adenauer-Ring to the south of downtown Neuss. It has a northwest-southeast orientation among other buildings that all tend to look like boxes or flat, formless structures.

The building’s unusual shape makes it stand out among these other buildings: a large, not quite symmetrical “Y” that largely forgoes straight lines. The concave sides of the building—two with gentle curves and one with a sharper curve—form a lively contrast to the three ends, which feature split and offset, upwardly inclining walls. Clad on all sides with aluminum panels, the four-story building is accessed on the southeast by a broad entrance area with a projecting roof. A café and a bistro are behind the foyer. Most striking, however, are the two stairways leading from the ground floor to the second floor and the second floor to the third.

What makes this arrangement so special is less the large “V” shape and more the way the formal contrasts operate between black and white on the one hand, and positive and negative on the other. While adhering to a simple layout, in which a sequence of offices line a corridor to the left and right, the administrative building represents a highly sophisticated adaptation of this convention. The threecorridor system has the appearance of streets that meet from three different directions at a plaza. There are open kitchenettes and bar tables in the hallways.

There are single, double, and triple offices, all based on a 1.35-meter grid. The rooms have floor-to-ceiling glass walls. Fresh air is provided through aluminum vents coated with an anthracite-colored powder.

Upon closer examination, the building proves to be a continuation of the ideas and concepts developed five years earlier for the headquarters of Rheinkalk GmbH in Wülfrath. 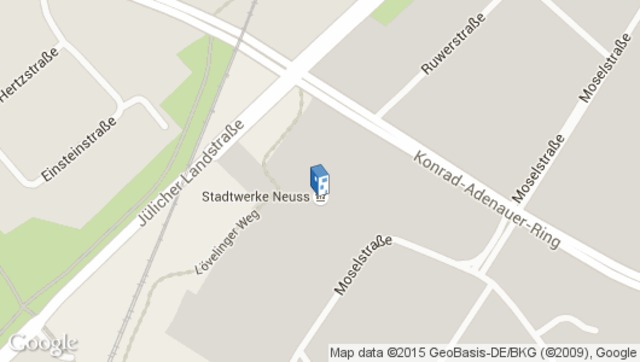