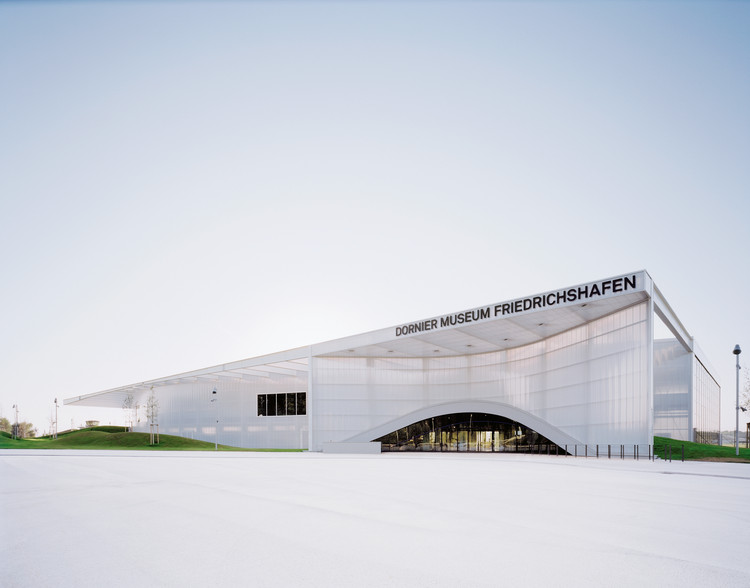 The plot for the Dornier Museum is located in the immediate vicinity of the runways at Friedrichshafen‘s regional airport. The aim of the museum is to present the technology of aircraft construction and the history of the Dornier plant, which was founded in 1922. In addition, links to contemporary history are to be established. Among the exhibits are veteran aircrafts some of which can still fly today. The shape of the museum is derived from the di- rect access of the exhibited airplanes to the runways. Translucent, curved facades delimitate the interior space and guide the way to the tarmac. The end faces oriented towards the airport are closed by transparent gates. A box within the large hall offers space for scenographic presentations of different eras.

Function and Concept
This museum documents the corporate history and rich tradition of the Dornier Corporation. It is sited in connection to the Friedrichshafen Airport, thus facilitating a uniquely contextual design concept. Translating the particular site quality in reference to architectural typology, to focus the predetermined program of the exhibition within a singular building, to design this space in a restrained fashion – similar to a stage space – encompasses the basic con- ceptual decisions for the Dornier Museum.

Maintaining and exhibiting the material documents of people and their environment mostly serves for the benefit of society and its development. Private institutions and individuals, among others, provide this important contribution. Thus, Dornier joins the ranks of renowned founders of private museums who make their collections publicly accessible. In order to document aerospace history, the Dornier Museum is conceived as a platform for the purpose of projection of and reflection on events of the past. On the one hand, exhibits and their historic context; on the other hand, the visitors and their individual comprehension and experience of history. Topically, exclusion and inclusion are both rooted within this concept to equal degrees. The goal of the museum’s architectural concept is to influence this process by facilitating and designing transitions, similar to an airport and its transitory function.

Constellation And Gesture
Museum and airport, past and present, in one location. This simultaneity manifests itself within a bowshaped runway, resembling an exit in proximity to the southern airstrip. At its apex, it is superimposed with a rectangular volume. The geometric intersection area is the basis for the museum floorplan. The exhibition space volume features curved perimeter surfaces in the north and south, projecting the contour of the runway upward to the rectangular roof structure. In the west and east, the lateral perimeter permits a transition from roof to façade to the runway. The roof elements, projecting outward from the longitudinal perimeter along the intersection of floor plan and runway, distort the accustomed, conventional image of a hangar. The hangar as recognizable type is subject to formal transformation. It thus evokes similarity and difference to the surrounding airport buildings.

Material and Character
Spatial juxtaposition of museum and hangar serve as basis for the predetermined exhibition program. The architecture, reminiscent of industrial buildings, originates in perceiving these areas as a unit. Not a museum with a hangar, but a hangar as museum. Context and budget determine the quest for the ideal form of an aerospace museum. The result is an exhibition space that conveys the principle of airplane manufacturing as an image by citing the economic use of resources.

The curved longitudinal perimeter surfaces are segmented imperceptibly by polycarbonate panels. The assembly system of the full-height, transparent panels enables avoiding construction-based divisions in the building exterior. This construction material, primarily used in industrial construction, conveys lightness and formability, and receives a degree of precision that transforms its expression and significance due to the dimensions of the building perimeter.

Along the southern facade, a dot raster pattern is applied to the perimeter surface, reducing sunlight intake. The raster pattern obscures the linear structure of the polycarbonate panels. The absence of a clearly recognizable structure conveys the image of a wall to the observer; the progressing impression of transparency however signals permeability. The limited number of apertures for doors and windows, latter framed as showcases and intersecting the homogeneous surface at medium height, provide points of reference of scale of the hangar. Along the north facade, polycarbonate panels are applied without further treatment. Their curved arrangement gives them, according to the observer’s point of view, characteristics of a filter, offering mere apparitions of the interior, and sometimes characteristics of a mirror, reflecting the expanse of the airstrip. 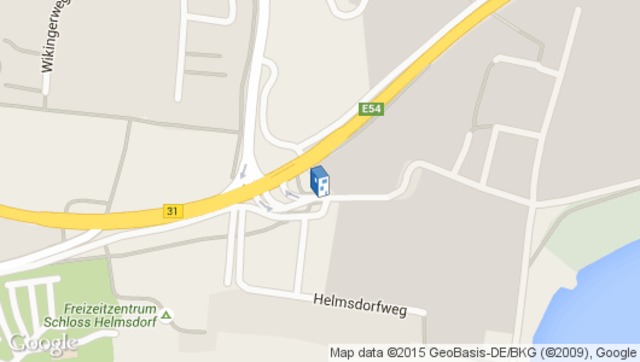 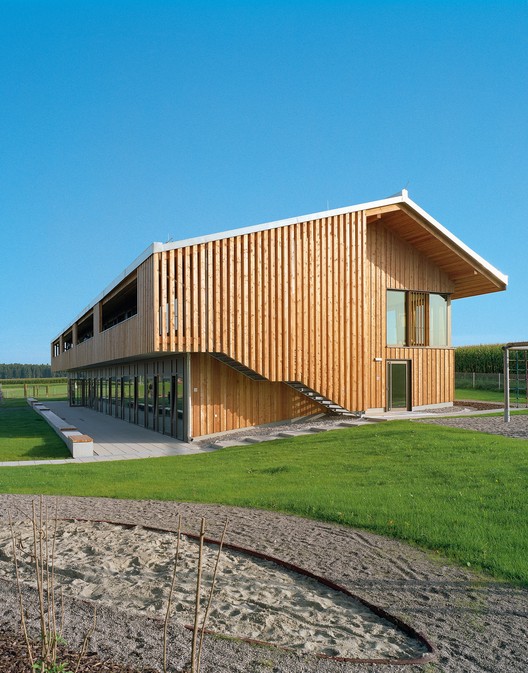