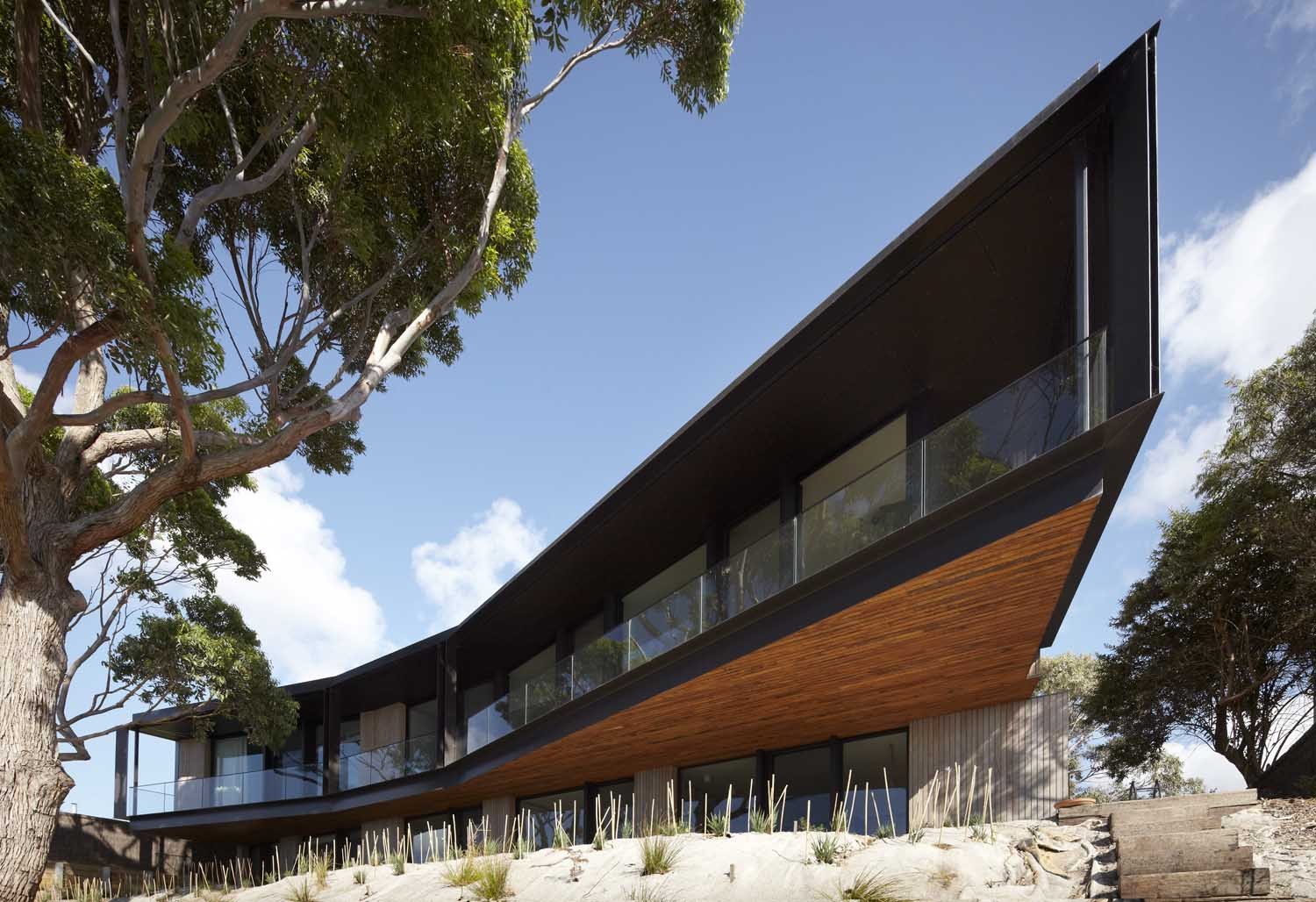 Text description provided by the architects. Bluff House on the Mornington Peninsula in Victoria is a holiday home which confidently addresses the challenges of a dual interface with a rugged coastline and the neighbouring rural countryside.

The building sits on top of an escarpment in the seaside township of Flinders. The view is world class, serene and bucolic to the rural north and to the south a brutal seascape over nearby Bass Straight. The site is located on a transition point between two geologies. This has resulted in a land slip affected site, most dangerous at a point where the site views are at their best. Deep bored piers anchor the building to the crest of the allotment at ground floor level whilst at the upper level, the floor plate cantilevers over the steep terrain below.

The first floor plan is a linear arrangement of spaces kinked around existing trees. The cantilevered corners of the living room and main bedroom give the feeling of detachment from the building, a feeling of leaning over the edge.

The building has two faces. The benign northern orientation has views over paddocks defined by rows of pine windbreaks with rolling hills in the foreground. This facade is clad in tailored narrow blackbutt timber boards and reads as an angular but warm and welcoming timber house. The more inclement southern orientation has resulted in a brooding and sharp composition of dark painted steel and glass. The two facades are not seen together yet co-exist. The geometry resulting from the angles of the building offer a multitude of indoor and outdoor refuges from the sun and wind.

The brief was to design a holiday home which would become a semi permanent home at some time in the future, an increasingly common brief these days .The gay abandon of the archetypal holiday retreat had to be somehow tempered with the ever increasing list of requirements of an everyday home.

The uniformity of the cladding and the jagged composition of walls and parapets suggest house as sculpture, something timeless, non utilitarian and something which will maintain the excitement generated by this location. The spareness of the palette of the external materials continues inside. Grey tiled floors, blackbutt floor boards, white acoustic ceiling and chocolate brown wall panels reinforce the subdued internal experience and the ever changing external colours.

The ground floor slab is a rigid base upon which sits a flexible superstructure of timber studs and steel roof members. The high specification factory painted steel facade allowed for off site pre fabrication which aided in speed and economy of construction. The timber framing and lining boards also added to the economy and simplicity of the project.

The shell is highly insulated; deep overhangs protect the double glazed windows from unwanted sun. Roof catchment is a water source for both the building and the drought tolerant garden.

This is a tightly planned building of great complexity and variety of experiences.A two faced house is not necessarily a bad thing! 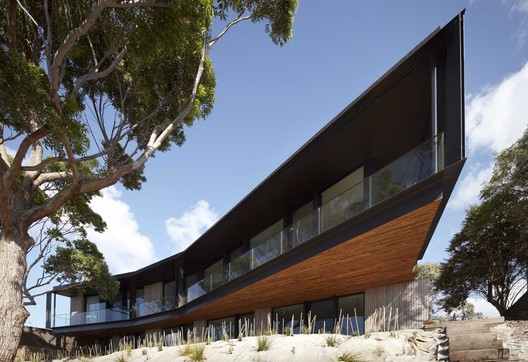