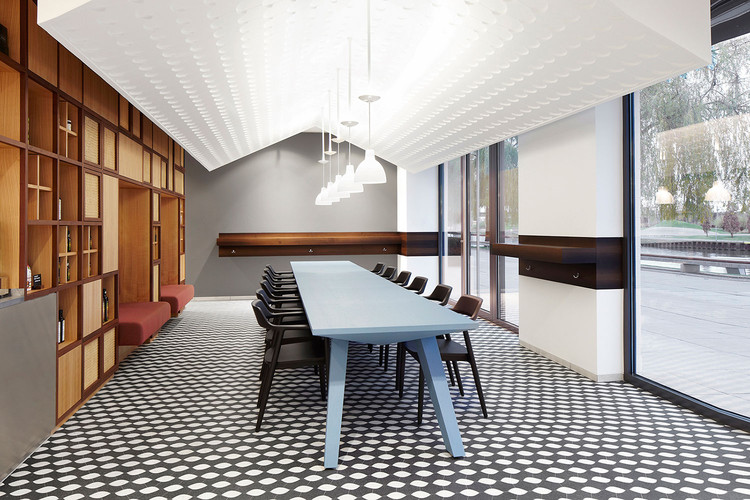 Text description provided by the architects. The Autostadt in Wolfsburg now offers organic-quality bread at its in-house bakery, “Das Brot.“ The bakery, located on the ground floor of the ServiceHaus, turns the spotlight on artisanal baking traditions, while its interior design also expresses the concept “From Field to Counter“. The Autostadt worked closely with creative agency Designliga to implement the idea, defining the use of sustainable, renewable materials and traditional craftsmanship as clear priorities. “The new bakery not only stocks exclusively organic quality products; even the building materials we used are responsibly sourced, from local timber to tiles and fabrics“, explains Micaela Tewes, head of events and interior design at the Autostadt and its deputy creative director.

The clean, clear lines of the functional bakery flow into a warm, welcoming dining area dominated by a long wooden table where guests eat together. The homely atmosphere is further emphasized by the textured plasterwork of the ceiling, suggesting the tiled roof of a farmhouse, and by open shelving in a design inspired by traditional half-timbered houses. The open displays behind the counter allow customers to see through to the bakery itself and create a feeling of transparency. The patterns formed by the ceramic tiles of the mosaic floor express the entire process “from field to counter“ in a flowing metamorphosis of symbols from field to wheat, from wheat to flour and from flour - combined with water - to bread.

Uncompromising quality is a cornerstone of the design and interior at Das Brot. To echo the traditional working methods used in the bakery, the interior was also created using ancient forms of craftsmanship, bringing together mosaic and plasterwork artists and basket-weavers to create a place where function, warmth and quality merge into an appealing whole.

“Das Brot.“ is open daily from 8 am to 6 pm. Morning customers can choose from a variety of breakfasts or simple, rustic buttered bread and traditional sandwiches known as “Klappstullen“. In addition, the Autostadt chefs have created hearty seasonal spreads tailor-made for the new bakery. The menu is rounded off by speciality coffees, traditional regional produce such as “Schichtkäse“ – layered soft cheese – and smoked ham, and a daily changing bowl dish such as country lentil stew or potato soup.

As the communication platform of the Volkswagen Group, the Autostadt in Wolfsburg brings the values of Volkswagen to life. Over 26 million visitors have explored the Autostadt theme park and out-of-school educational centre since it opened in 2000, placing it among Germany's most popular tourist destinations. In addition, the Autostadt is the world's largest car collection centre and home to the most popular automobile museum in the world – the ZeitHaus.

Since its foundation, the Autostadt has engaged with the values that form the basis of responsible entrepreneurial action. Topics including environmental protection, climate change and social responsibility have been addressed there since 2006 under the combined heading of Sustainable Development; these themes have been continuously advanced in collaboration with external partners from the fields of science, business, education, design and architecture.

The Autostadt has set itself the task of providing its two million and more visitors every year with an in-depth insight into the topic of sustainable action. Volkswagen is convinced that sustainable action is only possible when ecological, social and economic requirements can be harmonized into a state of mutual balance. As the communications platform of the Volkswagen Group, the Autostadt gives insights into Volkswagen's corporate sustainability philosophy, as well as setting its own areas of focus by communicating aspects of sustainability, education and nutrition and bringing them to life in an integrated aesthetic experience.

The Autostadt restaurants are operated by the Swiss restaurant company Mövenpick. Mövenpick has been the partner of the Autostadt since its opening in 2000, and worked with the Autostadt to design and develop its catering concept. From 2003 onwards, all restaurants there began to move consistently to serving regional produce, the majority of which is grown or farmed according to ecological and seasonal principles. Organic certification is now the main criterion used in selecting suppliers. Transparency and regional sourcing are of the utmost importance for all foodstuffs used at the Autostadt. “Das Brot.“ is the logical continuation of this philosophy of regional, traditional on-site production which permeates the restaurant concept there. After the ice-cream maker “Cool and Creamy“ and home-made pasta restaurant “La Coccinella, the bakery is the third food outlet to operate its own in-house production. All products served and sold at “Das Brot.“ are 100 per cent organic. 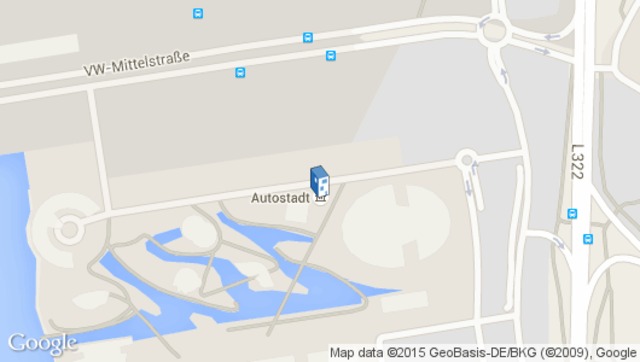