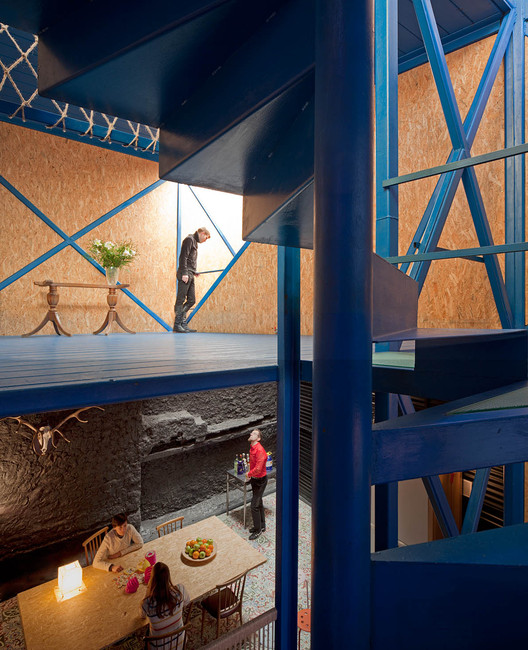 Text description provided by the architects. TSM3 Unstable Housecombines the restoration of the ground floor of a 59,80 sqm terraced property in the centre of Madrid, and the construction of 2,5 new floors on top, with 154 sqm. The design dematerializes the original construction into a flexible home-cum-office that can change anytime. All the elements that define the living space are in a state of flux. The architecture does not seek to define and limit through fixed elements such as structures, walls or gaps, but rather through a series of devices producing actions or situations.

Unstable façade. The facade starts out as a reproduction of traditional 19th-century architecture to which the building must legally conform following municipal regulations for the historic centre. And yet, due to its light construction and contemporary manufacture, it can be modified by transforming the relationship between exterior and interior, privacy, and views. This provides, under the heat and light from the sun, an interface between the versatile interior, allowing us to modify the experience, adapting it, in a typically 21st century attitude.

·  A 19th CENTURY FAÇADE may be composed, following visual criteria based on the ancestral principles of load transmission.

·  A 20th CENTURY FAÇADE may be composed following geometric criteria. The walls are a skin, a fabric with abstract autonomous composition rules.

·  A 21st CENTURY FAÇADE will be automatically composed, as the result of the relation between inside and outside, following environmental conditions: natural light, sun exposure, insulation, ventilation and humidity, as well as privacy or the wish to linger in an intermediate private-public position. Form and Function follow the Weather.

Municipal regulations require new buildings to use the traditional ‘Madrid-style’ chalk-based rendering, a typically baroque trompe-l’oeil rendering reproducing the patterns of stone ashlars. We reduce the thickness of the chalk rendering to 1.5 mm on a sheet of extrusion polystyrene fitted within black-lacquered galvanized steel frames with the proportions of the ashlars.

Sky blue is a traditional baroque colour in Madrid, but also the colour of the insulation material, joining traditional imaginary with the development of a culture of sustainability.

The black colour of the frames recalls the classic "silhouettes" of the eighteenth century, while also fitting into the contemporary graphic imagery.

Structure. The building is constructed on top of an existing solid brick structure, with original 18th-century supporting walls, its ground floor being only half-accessible due to a right of use held by the neighbouring convent. Half the new building is cantilevered over the convent part, and supported by strikingly visible blue-painted steel beams. In the new floors there is not a single brick. The 10cm-thin metal floor slabs blend in with the joinery, providing greater lightness.

Flexibility. The design is a flexible system of housing and / or office that can change and evolve with time. Each floor is divided in two large adaptable spaces either side of the stairs. The main installations are concentrated within a practicable central passage which allows wet areas to be added or removed depending on programme needs with no grey energy waste. The walls are finished with screw-on OSB panels to facilitate the transformation of the building and its technical services. All building materials are reusable. The delivered construction is the most basic arrangement, a large single-space lofty envelope with very few partitions, together with instructions defining how to introduce new uses in the future.

Bioclimatics. The thick ground floor and basement brick walls provide masses of thermal inertia which can be reconducted through the central circulation space, with sliding glass openings. The double-layered wall roof garden works as a greenhouse in winter or as a solar chimney in the summer, to create the draft through the basement from inlets to the narrow street.

Water recycling within the building is foreseen, with a dual drain system separating gray and black water in-house, so that the former can be purified in the basement area and re-used for toilet flushing and the drip-watering system for plants.

TSM3 is designed for change and transformation. It is an unstable house. It will never be finished.