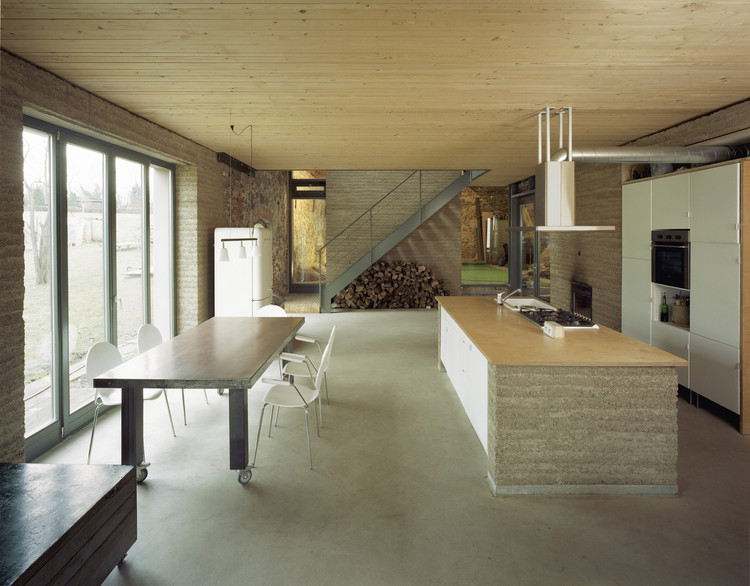 The new dwelling picks up the shape of the old rough-hewn-stone barn, replacing a collapsed timber construction that previously stood in its place. The new extension restores the edge of an ensemble of agricultural buildings and marks the boundary between the village and the “Märkische Schweiz” nature reserve beyond. It reinforces the existing structure of the village and utilises the existing infrastructure, consciously resisting overspill into the countryside.

The rough-hewn-stone barn has been maintained in its original form as an unheated space. The barn and the new house are accessed from the north via a ramp and entrance area in the former doorway of the barn. The transition between both parts is marked by a rammed earth wall with an insulated core and a glass façade. This ‘cold’ area leads on inwards into a circulation space with stair to the upper floor. The plans of the ground floor and upper floor open southwards onto an adjacent terrace below and large glazed dormer above. The kitchen block which looks onto this opening forms the active centre of the house, with a more restful living area to the east. The bathrooms and installations are arranged on the north side. The existing and new building complement one another, sharing a barn-like quality and huddle together under the same roof.

The southward arrangement of the house maximises passive solar energy use. It is heated using solar collectors and a wood-chip fired central boiler. An electrical system ensures that pipes do not freeze when the owners are away. Warmth is provided by underfloor heating on the ground floor and a wall heating system embedded in the clay plaster on the first floor. In this way it was possible to reduce the primary energy consumption to as low as 24 kWh/am² (German EnEV regulations). Rainwater is used to flush the toilets, for the washing machine and for watering the garden. Waste water is treated on site before being allowed to soak away.

The ground floor is enclosed by load-bearing rammed earth walls on a reinforced concrete foundation. It is the first dwelling to be built solely with rammed earth since the lifting of the emergency housing provisions in Germany in the 1950s. The core insulation for the rammed earth wall between the barn and the house was developed especially for this project and used here for the first time. It was developed using workshop test panels and an on-site prototype. The solid wood laminated ceiling follows the same theme of layering and stacking as the rammed earth walls. The upper floor is a timber frame construction filled with hemp fibres. The external walls are insulated with hemp-fibre panels and rendered. By making maximum use of renewable and regenerative raw materials, only a small amount of fossil-based resources were consumed in the construction of the house. 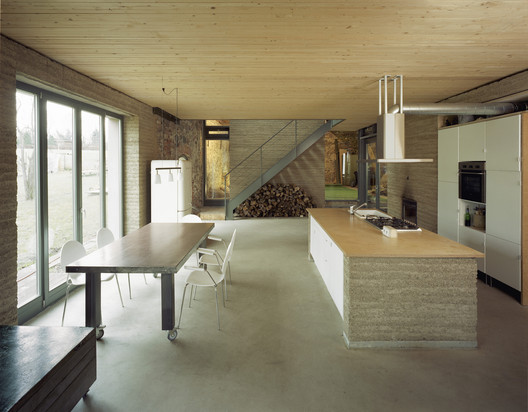