Save
The Blatz / Johnsen Schmaling Architects 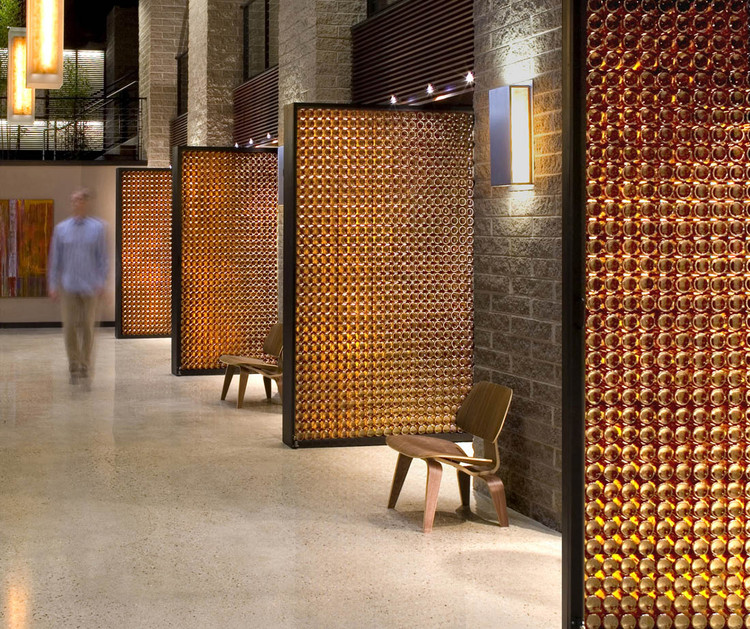 Milwaukee’s Blatz Brewery, one of the city’s oldest and now defunct breweries listed on the National register of Historic Places, occupies a narrow block at the downtown’s northern periphery. Built between 1851 and 1910, the massive masonry monolith had undergone a series of additions and alterations in the 1980s to accommodate for apartments and offices but had subsequently fallen into disrepair. Working with a limited budget and within the strict parameters of the existing structure, we focused our efforts on a series of small interventions to re-imagine the building’s public sphere. A canopied street-level entrance leads into the new central lobby that bundles the main circulation spines and creates a lively interchange between offices, apartments, and newly created commercial spaces. Sliding between existing masonry columns, a narrow glowing box serves as concierge and small coffee shop. Buffered by a bamboo grove, the lobby overlooks a lower level lounge, which features a series of monumental bottle doors; depending on the doors’ position, the lounge can be used as one large open space, or divided into smaller intimate areas. An open-air roof pavilion provides a satellite amenity for all building users. Overlooking the skyline, the thin light strips lining the pavilion’s roof structure emit an enigmatic glow into Milwaukee’s dark nights, marking the urban resurgence of this downtown neighborhood.

Each pivoting bottle door is 9’-6” wide and 9’ tall and consists of a welded aluminum frame and 1,590 horizontally stacked empty beer bottles, some of which were original Blatz bottles found in unopened boxes in the basement of this old brewery. Using CNC technology, the bottles are held in place by a thin web of precision-milled neoprene rings that are suspended between the members of the aluminum frame. Illuminated on all sides, the brown bottles emanate a warm amber glow reflected in the polished concrete floor. We developed a customized set of pivoting hardware that allows a lounge guest to rotate each door around its center axis, thus permitting a high degree of spatial flexibility: the space can be totally open or, alternatively, private parties can be held in one part of the lounge while the other one remains accessible to the public.

The entry vessel consolidates the service amenities for the lobby, including building security systems, an office for the building manager and concierge, as well as a small espresso and sandwich shop. Sliding between two existing masonry columns, the narrow rectangular volume is sheathed with back-lit sandblasted polycarbonate glazing and wrapped with wooden slats. Its soft luminosity subtly lights up the lobby as it echoes the amber hues from the bottle doors, providing an ethereal backdrop for the daily activities unfolding in the lobby. A linear grove of 9’ tall bamboo was planted along railings overlooking the lower level lounge. The grove acts as an acoustic and visual buffer, screening the lounge from the upper lobby’s bustle, and actively improves the overall air quality of the two-story space.

The roof pavilion consists of a simple steel superstructure constructed from a set of prefabricated shop-assembled elements that were lifted up onto the roof by a crane and connected in the field. A kit of polyacrylic sheets can be attached to the trellis beams for overhead screening. Thin LED strips are mounted to the underside of the trellis beams to provide ambiance lighting for the terrace. Simultaneously, the illuminated roof pavilion activates the corner of the building and transforms into a small neighborhood beacon, visible from dozens of blocks away.

The entry canopy, marking the main entrance of the building and anchoring the internal lobby to the city outside, hovers over the drop-off area and penetrates the glass curtain wall, where it defines a small vestibule. Providing a dramatic visual effect when viewed from the street, the thin lighting strips with custom-designed translucent Eco-Resin lenses illuminate the sidewalk and then extend down vertically in the vestibule area, creating a dramatic interstitial transition between outside and inside. 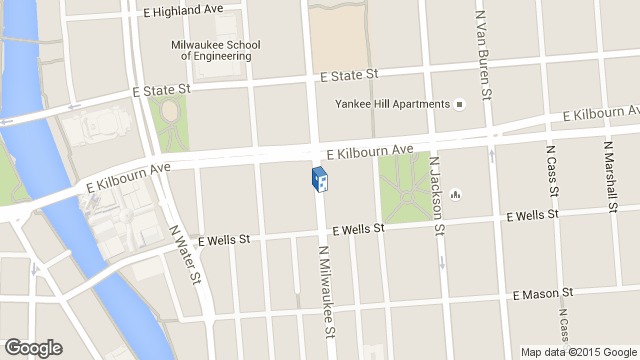