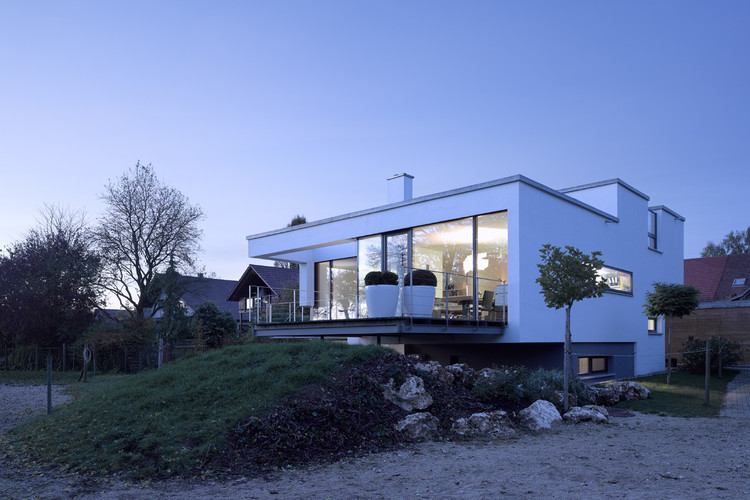 A barren area with a stone-filled soil, which only enables underground levels up to a depth of 1 m to be built. And a plot of land that is constricted by stables, which only allow good light from the southern side. Based on these circumstances, it was decided that this new build would be a split-level house!

All individual rooms on the first floor, which are north facing, receive enough sun from the south as a result of the split-level concept.

Similarly, the study in the "cellar area" also gains space and light from a deep-set courtyard.

Since in the split-level house the individual levels are staggered, the ground floor is 1.5 m above ground level. In the living/dining area you are therefore sitting – inside as well as outside – at treetop height, which creates a wonderful atmosphere. Despite the height difference, there is direct access to the garden: a slightly raised slope directly in front of the patio leads down to the green area and is enthusiastically used by children to play in summer and winter!

The rooms are well-lit and the carefully thought-out details are subtly but effectively emphasised. For example, the floor-level window in the living room hides the neighbours and provides an atmospheric view into the green foliage. At the same time it captures the low-lying evening sun and immerses the living room in an ambient light.

Incidentally: the stones that, as expected, were found when excavating the foundation pit were incorporated in the preliminary stages in the building design: they can now be found in the natural stone facade and the sloping garden! 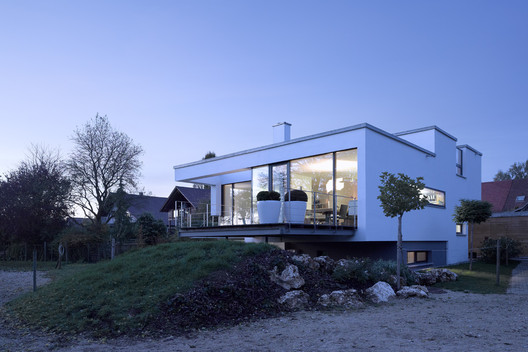