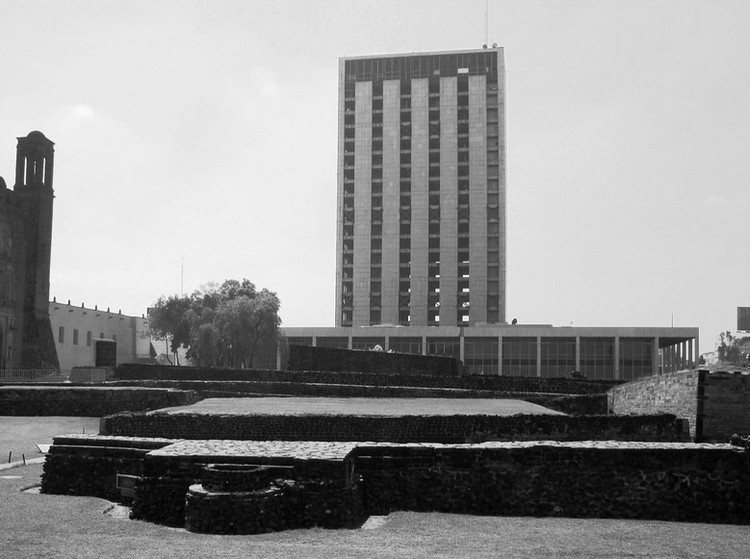 The design of this work was a challenge for the zone in which it is located, which is predominantly residential, situated far from offices and embassies and adjacent to a newly restored archaeological site. With a metallic structure covered in white marble, today it is the seat of the University Cultural Center Tlatelolco of UNAM (National Autonomous University of Mexico) and houses the Blaisten Collection - the most important collection of Mexican art in the world.

This 27-story tower that stands at 335 feet is found in a rectangle bounded in the north by the Tlatelolco Archaeological Zone and the Plaza de las Tres Culturas; to the south, by the Avenida Ricardo Flores Magón; to the west, by the Central Axis Lázaro Cárdenas and to the east, by the service areas of the Parish of Santiago and the housing unit itself.

Originally this building, having more than 121,000 square feet of space, was intended to  house only the headquarters of the Foreign Ministry, which was looking for a location that was well-connected to the rest of the city and with a modern interior. They finally decided on Tlatelolco as the perfect spot.

Since the structure is located in a seismic zone, it is anchored to the ground with 45 steel and concrete pilotes that penetrate to a depth of 114 feet and have 36 seismic shock absorbers. These can withstand an 8.1 magnitude earthquake. However, it has suffered a few minor damages due to the 5 earthquakes it has endured, which were eventually repaired by the National University and restored the building’s functionality and unique aesthetics.