Save
Infographic: Life Inside The Kowloon Walled City
Share
Or
Copy

The Kowloon walled city was like a glitch in the urban fabric of Hong Kong; a solid 2.7 hectare block of unrestrained city. Depending on who you ask, it was a Bladerunner-esque slum or a poor, but tight-knit community. Either way, for the best part of the last century, it was the most densely populated place on earth, with 3,250,000 people per square mile, compared to Hong Kong’s mere 17,000.

The site of the walled city dates back hundreds of years. Spending most of its life as a Chinese military outpost, the Chinese hung on to the KWC when Hong Kong was leased to the British in 1898, as its location, right in the middle of the territory, made it easy for them to keep an eye on the new tenants - an idea which didn't sit too well with the British.

What transpired next was decades of confusion and diplomatic sensitivity, as both countries sought to claim sovereignty over the area. It came to a head at the end of WWII when the Japanese, who had captured the city, surrendered. China announced it’s intention to fully reclaim the site, causing floods of refugees to flee there and creating unease with Britain who intended to continue as it had before.

To avoid putting further strain on relations, both countries developed a ‘hands-off’ approach to the city, leaving the enclave more or less ungoverned by police, building codes, health laws, or any other form of regulation. The population of the city boomed as refugees and small businesses flocked there to take advantage of this new city where you didn't need a visa, a licence to operate, or to pay any tax.

The population surge continued unchecked, while politicians, for the most part, stood back. The government provided water mains and mail delivery to the city, as well as orchetrating a series of raids in the 1970's to root out the Triads who had taken control of the city's various brothels, casinos and opium dens. By the 1980’s, the population stood at 33,000, with most people sharing apartments of 250 sqft or less with several other families. The vast majority of the complex’s 350-odd buildings were between 10-14 stories tall and devoid of any input from architects, planners or engineers; their height was restrained only by the proximity of Kai Tak airport.

Between the buildings there was a dense labyrinth of crevice-like alleyways, many only 1-2 meters wide, where sunlight rarely made it down to ground level. When navigating this network, residents would carry umbrellas to protect themselves from water dripping from leaky pipes above. An interwoven series of stairs and passageways meant you could travel from one end of the enclave to the other, without ever touching ground.

Despite its dystopian appearance, extreme poverty and unsanitary conditions, many of the residents remember the place fondly. Most of them recall a close, community spirit, spawned from shared poverty and closeness. In fact, in 1963 when an early attempt was made by the Hong Kong government to tear down the city, the residents formed an anti-demolition committee and successfully resisted the authorities.

However, by the 1980's the squalid conditions had become too much of a concern for the authorities and a joint Sino-British declaration in 1984 set the Kowloon wrecking ball in motion. Despite protests, the government spent HK$ 2.7 billion on relocating the residents. By 1992, the city was empty. Just two years later, it was razed to the ground and replaced by a traditional park; however, not before it was documented by fascinated architects and photographers alike. Today, the only indicator of the site's eccentric history is s small scale-model of the cluster that used to stand there. 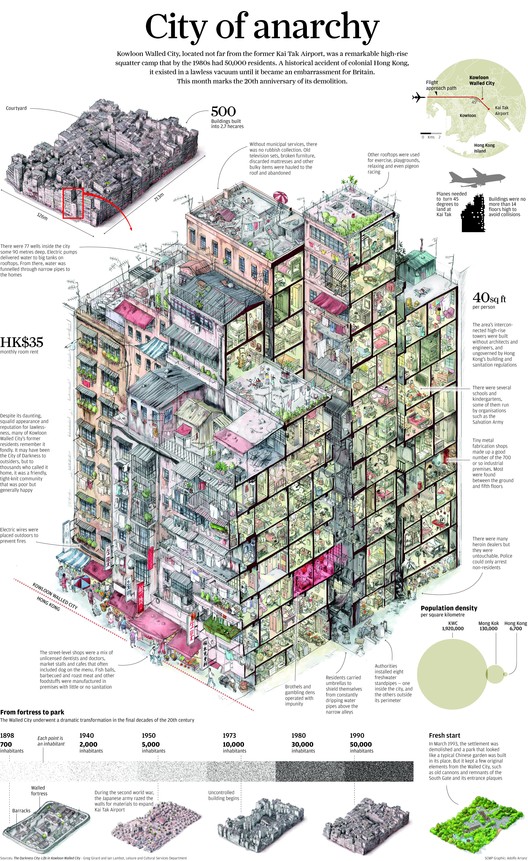