The Bolshoy Ice Arena for winter Olympics in Sochi, Russia first was to remind the Faberge egg. At the sketches of the bidding book developed by Botta Management (CH) its shape and even patterns of its exterior resembled precious Easter gift of the Russian emperor’s family. Approved by Olympic committee, those sketches became the starting point for our project. The main theme found its interpretations in a clear geometric ellipsoid shape and in a system of exterior built in LEDs that may color the building into Fabrgee-like patterns or any other patterns, or leave it blank and pure.

The further design of its façade was largely influenced by the actual location of the building, which is only 300 m from the Black Sea shore on the Imeretinskaya lowland. The glazing wave-like curve has two extremums that are facing Olympic park and Caucasus Mountains on one side and Black Sea on another. This façade allows visitors to enjoy the remarkable views and makes visible its interior from the outside, inviting to step in. Glossy aluminum composite panels of pearl color cover the shell of the building reflecting the surroundings and the changes of the daylight. The total surface area of this giant dome is 31 745 sqm with a maximum span 193 m, minimum span 142 m and a height of 40 m. In a close neighborhood to the mountains the hill, which carries the ellipsoid of the Arena, doesn’t seem too artificial. In fact, it was necessary to build a stylobate level to house athlete zone, trainig arena, media center, technological premises as well as car tunnels and parking lots. Visitors are entering the Bolshoy Ice Arena from the level 0.000, the roof of the stylobate, which functions as the open public area around the building on top of the hill.

As any arena, The Bolshoy Ice Arena places the show in its very center. The interior design follows this centripetal move; the closer you get to the showground - the more condensed, textured and colored it becomes. The airy lobby is naturally decorated with shadows and highlights on its glossy floor and glass barriers of its galleries; its design plays with transparency and reflections, shades of white and curvy surfaces. In the main auditorium of the Arena the seats for its 12 000 visitors are colored from deep wine red to light grey, focusing attention on the key activities and sports competition. 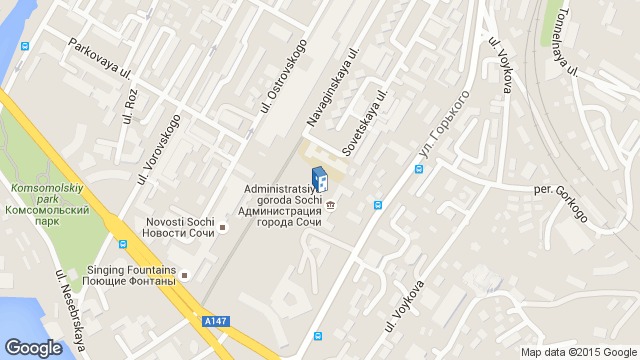