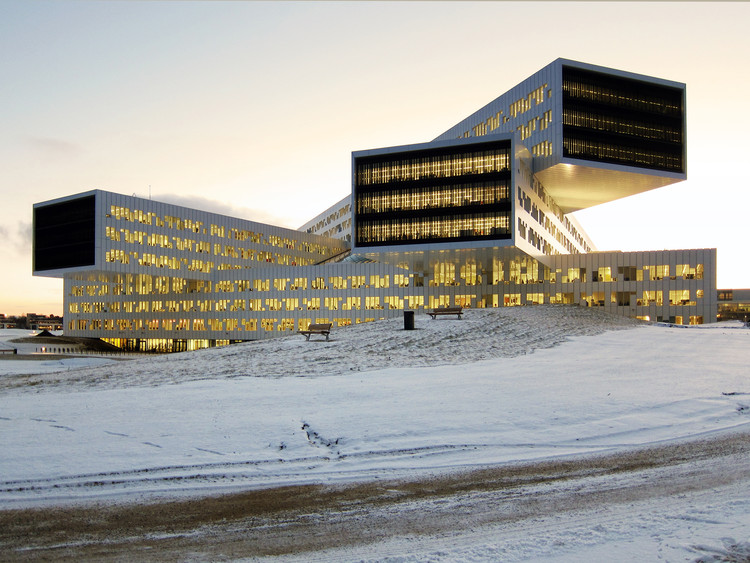 Iconic & Innovative
Statoil is a Norwegian energy producer, the 57th largest company in the world by revenue, with about 30 000 employees in 37 countries. 2500 of these now work in this unique office building, with a spectacular view over adjacent park areas and the fjord of Oslo. The iconic structure seeks to reflect Statoil’s role as an innovative and internationally pioneering petroleum company as well as giving a new identity and pulse to the local environment.

From Airport to Urban Environment
The Fornebu area, a previous site for Oslo’s main airport, is undergoing a radical transformation into an urban area, with commercial and residential buildings and public recreation areas.

A key challenge of the design was to balance size and architectural expression with its surroundings, whilst at the same time introducing new impulses that enliven the park and commercial area. More specifically: how does one design a 65.000 / 117.000 m2 commercial building complex to make it blend with the idyllic shoreline of Fornebu?

Park and Landmark
A large part of the site has been transformed into a publicly accessible park and promenade along the fjord. The new office building stands on the site of the old airport’s multi-storey car park. The structure consists of five office lamellas of identical size, stacked on top of each other. The concept minimizes the environmental footprint of the building and gives a generous amount of space to the park.

Modular Construction
Each lamella is 3 stories high, 140 meters long and 23 meters wide. The modules are oriented differently to optimize internal daylight conditions and views towards the fjord landscape.Inside, the modules create a communal atrium, with an “urban plaza” connecting many of the social functions on the ground floor. The design is rooted in the democratic principle of bestowing all users of the building with excellent working conditions that include stunning views and good light conditions.

Seamless Superstructure
The building design draws on the oil industry’s own construction forms and techniques. The steel superstructure enables the different modules to cantilever up to 30 meters. Escape stairs and services are concentrated in four giant concrete cores, which also stabilize the superstructure. The façade consistes of about 1600  prefabricated elements with integrated windows, insulation and solar-shading, a highly energy efficient solution with no visible fixings in the entire facade.

Propeller-Shaped Glass Roof
The central atrium is covered by a high-tech, “propeller-shaped” glass roof – the first of its kind in Scandinavia. The geometry can be described as a «soap-bubble», finding the smallest surface area to close the volume between the modules. Considering the extra weight from snow, this construction was one of the most complex challenges of the project.

Friction for Innovation
A communication tower in the communal atrium is the centre of the building’s social life; everyone passes through the atrium to and from work. In this way, spontaneous encounters and exchanges are fostered, which are very desirable for an international knowledge-based company such as Statoil.

Flexible Solutions
The office building has a high degree of flexibility to ensure that it can easily be adapted to changing future needs. A specially developed ceiling allows workspaces with separate units as small as 3x3 meters, each with access to power, sprinklers, ventilation and lighting. An interior almost free of columns makes it possible to easily adjust the number and size of workstationsand meeting rooms according to a project or the tenant’s shifting needs.

Cost Effective
The characteristic building is highly cost effective and has a calculated energy use of just 103 kWh/m2/yr. This is achieved through several methods, including using heat from the remote centralised heat source, 85% energy recycling and of course a well insulated and airtight skin: The triple-glazed façade panels have an u-value of 0.6 and the air tightness of the construction aids reaching the very low energy consumption figures for the building.

20 Months, 2500 Workers
The construction of the building above ground was completed in less than 20 months, with a total of 2500 people from 30 countries having worked on site. Due to the very short construction period, most of the building, including steel and concrete superstructure, facades and glazed structures, was prefabricated off-site. Northern Europe’s biggest mobile crane was used for the assembly of the steel trusses.

Fruitful Dialogue
Thanks to thorough planning, advanced BIM-modeling and a fruitful solution-oriented dialogue, the team of the architects, client and owner, construction companies and all subcontractors were able to complete the complex design on schedule. The result is a building where the owner, contractor, architects, construction companies and user of the building have all expressed great satisfaction with the project.

A Modern Scandinavian
Although an untraditional office building, the new Statoil offices represent typical Scandinavian values by emphasizing democratic values and social equality. Both placement and orientation reflects optimized adaptation to its surroundings. Inside, the warm oak interior and cool aluminum reflects the soft northern daylight in different ways, and create a much appreciated contrast in the aspect of accessibility and universal design. 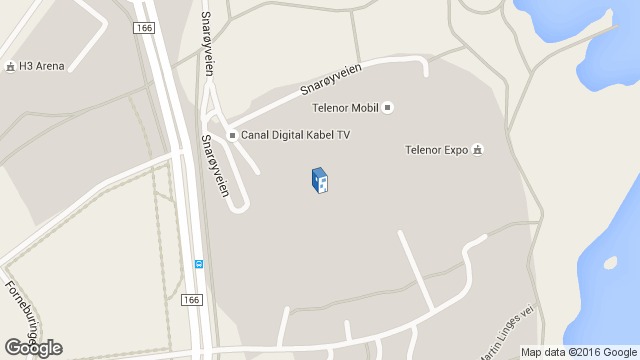