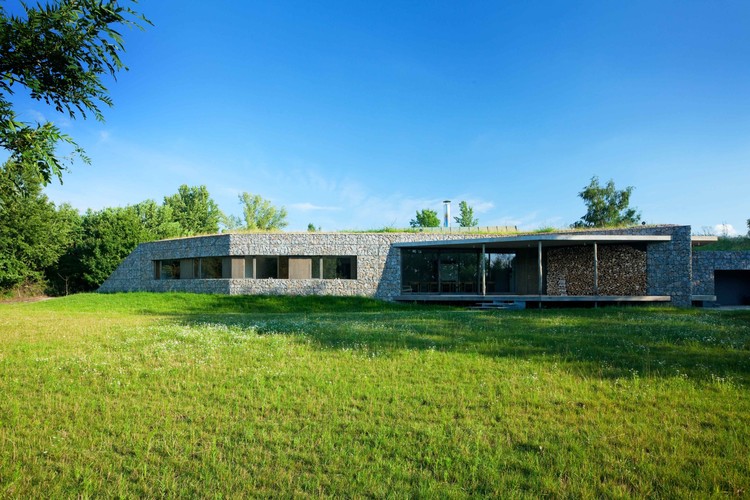 Text description provided by the architects. Existing green mound, protecting the open fields of the game preserve from the bustle of the road became a refuge for hunting lodge – a lookout, which replaced original technically unsuitable structure. Above all, the lodge provides necessary facilities for the game preserve, as well as becomes a place of encounters, whether with friends or of romantic views of the surrounding countryside.

Visitors can spend their time here by not only observing the game and comparing their acquired experiences, but they can also take a rest in the functionally furnished rooms. The sounds of deer in rut will be heightened by the crackling melody of wood in the fireplace.

The structure’s walls are made of insulated reinforced concrete blocks cladded with stone gabions. Due to regular flooding of the surrounding meadows the floor level has been raised about 80cm above the surrounding terrain.

The main and the only façade is, despite the unfavourable orientation toward the sun open engaging vistas of the landscape. The windows are designed as large crevices in the stone wall.

The ceiling structure is formed by a reinforced concrete slab, which is raised in the hunting salon to form a skylight, bringing inside the missing sunlight. The skylight also allows for a greater height of the room, creating desirable location for trophies. The roof of the covered part of the terrace is supported by posts from local oak logs.

The hallway and kitchen in the back of the layout are illuminated by smaller skylights. The roof logically became a part of the existing green mound.

Originally planned hardwood floors were eventually replaced by marmoleum. Wooden planks remained only in the form imprints in the concrete ceiling. In the bathrooms and technical facilities, plaster finish has been used.

Wooden structures including windows are impregnated with tinted oil. Time goes on and the house just as a stone in the meadow is gradually overgrowing with tall grasses. Deer and boar once again run across the hill and it looks like they have not noticed its partial transformation. 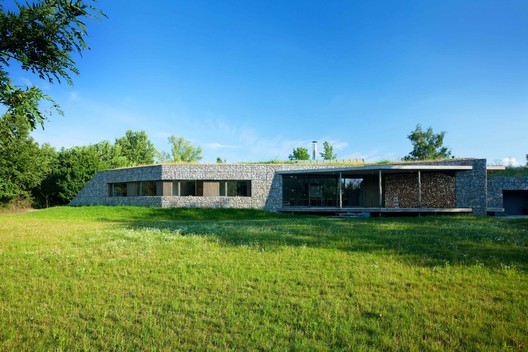