Designed by Ksestudio, their “Stage a lot” Flat Lot competition entry, which received an honorable mention, is a constantly transformative intervention that responds to the call for a temporary structure from the Flint Public Art Project. The project invents a ballet of ropes and pulleys animating four suspended rectangular pieces of white tyvek that in a neutral position hang vertically to form a topless cube. More images and architects’ description after the break.

The lot is a landscape, an open field for any possible activity, the stage gives the rhythm, hosts the events, triggers the action. “Stage a lot” becomes the core of densification for the open field, defining a place of gathering and reference within the plane of the lot.

Engaging with the large scale, that of the city, the vehicles and their speed, it allows for a microscale of human activity to reside in its polyvalent interiors. Operating with the motto: Transformation follows program, “Stage a lot” aspires to allow every single activity to push and pull the ropes of the cube and transform it according to the needs for privacy, shade, seating, etc. Claiming the latent theatricality of the place in a Venturian way, “Stage a lot” is a sign -a stage for the city- and a shed -a stage for the people-  a program condenser.

We imagine an open air cinema operating within the interior of the cube or inverting itself to expand in a 4 screen multi-projection activating the outside space. A concert will be hosted under the suspended folds of the canopy, a market will expand bellow the triangular horizontal sails that provide maximum shading. The finishing line of the marathon or a bike race will find itself under the most open and exploded instance, an Art-Fair or a  Car-Show will inscribe themselves under the overarching folds and pleats of one of the iterations.

Parking space during the day (occupying zero spaces for the sails can move up to allow parking underneath), event space during the night. A different form will promise and announce a different happening at the Flat Lot allowing for the anticipation from the city of: how will it look next? interweaved with what will happen there next? 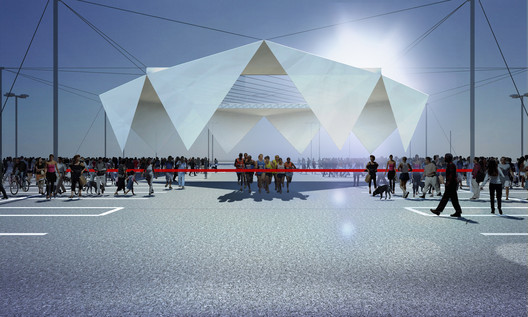