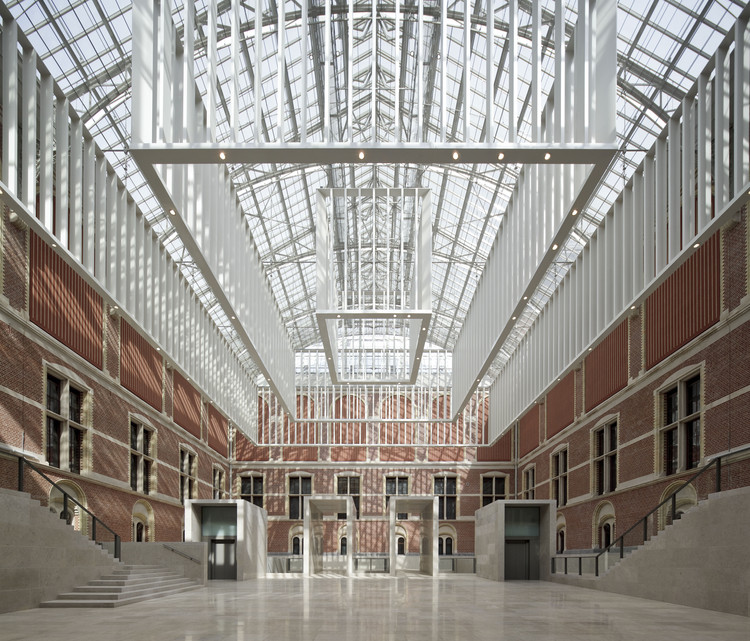 Text description provided by the architects. Following a European tender process, Spanish architects Cruz y Ortiz Arquitectos of Seville were chosen by a committee chaired by the chief government architect Jo Coenen to lead the transformation of the Rijksmuseum. Cruz y Ortiz proposed minimal alterations to the building itself. The firm has recreated the clear layout conceived by the museum’s original architect, Pierre Cuypers, stripping the building of its later additions to ensure that it is once again a coherent whole. The result transforms the 19th century building into a bright and spacious 21st century museum. The new Rijksmuseum features an impressive new entrance area; a new Asian Pavilion; a new outdoor exhibition space and garden; state-of-the-art facilities including new dining spaces, a shop, a restored library and auditorium; renewed education facilities, a new service entrance, a separate building for the conservation of the collection; and climate-control and security features, which are in line with today’s requirements. Also restored to their former glory are the high-ceilinged, spacious, late 19th century galleries. In keeping with the plan to restore the building where possible, the original monumental ornaments that decorated the walls and ceilings will be returned to the Gallery of Honour, the Grand Hall, the Night Watch Gallery and the stairwells. Cuypers‘ hallmark is best preserved in the library where the original design and ornaments have largely been maintained. The French interior architect Jean-Michel Wilmotte, whose work for the Louvre has earned him international acclaim, was invited to devise the interior design for the transformed Rijksmuseum. He has created all display elements for the galleries that complement the restored 19th century museum, including the display cases, plinths, lighting and furniture. In consultation with Cruz y Ortiz, Wilmotte has also determined the interior colour scheme, which has been inspired by Pierre Cuypers’ palette for the building.

Cruz y Ortiz have created an impressive new entrance area suitable for the needs of a leading international museum. The museum’s two inner courtyards have now been opened up, with the removal of galleries that were added in the 1950s and 1960s. A two-part, 2,250 square-metre Atrium has been created by sinking the floor of the two courtyards below ground level and connecting them via an underground zone beneath the original passageway through the building. The Atrium can be accessed from the passageway, which features glass walls through which passersby can admire the view of the courtyards. The Atrium features large glass-covered roofs and pale polished Portuguese stone floors that reflect the natural light, making the voluminous courtyard spaces feel airy and bright. Overlooking the courtyards are the warm brick façades of the surrounding museum buildings, interspersed with windows and niches. The light-filled Atrium is a welcoming space in the heart of the museum, and can be accessed by all visitors even without a ticket. Located within the entrance area are a café, the ticketing booth and a cloakroom.

Designed by Cruz y Ortiz, the free-standing Asian Pavilion is situated facing the Museumplein in the garden to the south of the Rijksmuseum, and is surrounded by water. The irregular-shaped, two-storey structure stands out against the red brick walls of the Rijksmuseum, with its walls faced in pale Portuguese stone and glass. It is characterised by many sloping walls and unusual sightlines. The pavilion is linked to the main building via an underground passageway. The Asian Pavilion has been created to showcase objects and works of art from China and Japan, Indonesia and India, Vietnam and Thailand, dating from 2000 BC to 2000 AD. The museum’s rich collection of Asian art is harmoniously presented in the 670 square-metre space, with a total of 365 objects on display. On the opposite side of the garden, between the Cuypers Villa and the Teekenschool (Drawing School), Cruz y Ortiz have placed another small new building – the new service entrance, offering access to the museum via an underground passage. The transformation of the Rijksmuseum has included the opening up of a large, outdoor public space for visitors, in the form of a 14,500 squaremetre historic garden. Based on a 1901 design by Pierre Cuypers, the garden’s new layout was created by the Dutch landscape architecture firm Copijn Landschapsarchitecten. The garden features several of the original formal garden styles, as well as restored statues and fragments of ancient buildings. A fountain, pond, greenhouse, and children’s garden will soon be added to this “outdoor museum”. A Henry Moore exhibition will open in the garden on 21 June 2013, the first in an annual series of international sculpture exhibitions to be held each summer.

The Atelier Building is a venue for the preservation and management of Dutch cultural heritage, housing a centre for restoration and conservation, scientific practice, research and education. It opened in 2007, and accommodates departments from both the Rijksmuseum and the University of Amsterdam. Developed by the Government Buildings Agency and commissioned by the Rijksmuseum and the Ministry of Education, Culture and Science (OCW), the Atelier Building is the first structure by Cruz y Ortiz to be completed as part of the Rijksmuseum renovation. Covering a surface area of more than 9,000 square-metres, the Atelier Building merges a new structure with an existing building designed by Pierre Cuypers, known as the Safety Institute. The building’s brick façade complements that of the Rijksmuseum and its surrounding buildings, yet the architects have created an easily recognisable silhouette to help identify the building. Functionality was the main consideration in the building's design. The unusual ‘zigzagging’ roof structure, the glazed northern elevation, and angled, triangular-shaped windows of the side-wall ensure that only northern light is admitted, to avoid direct sunlight. All the studios, hallways, doors and lifts are higher and wider than usual, facilitating easy passage for large works of art.

The Rijksmuseum’s multidisciplinary education centre will be situated in the historic Teekenschool (Drawing School). The renovation has restored the school building to its original function as a space for learning, enriching the museum experience by providing opportunities for art enthusiasts of all ages to take part in specially created programmes revolving around the Rijksmuseum collection. Established in 1892, the Teekenschool owes its name to its original function as a drawing school, a forerunner of the Gerrit Rietveld Academy. The concept and design of the building was developed by architect Pierre Cuypers, who envisioned it as a place that would help to improve national art education. The restored building will be the most comprehensive museum education centre in the Netherlands. Connected by the theme of ‘learning to look by doing’, the centre's three modern studios will accommodate a varied range of activities. During the ten-year transformation of the Rijksmuseum, the Philips Wing has remained open to the public, with the exhibition Rijksmuseum, The Masterpieces. The Philips Wing will close for renovation in March. Cruz y Ortiz will lead the design, and the space will be converted into a new home for temporary exhibitions. 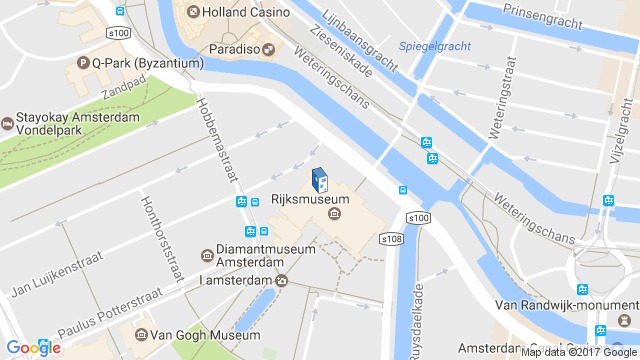