Save
Rock It Suda / Moon Hoon 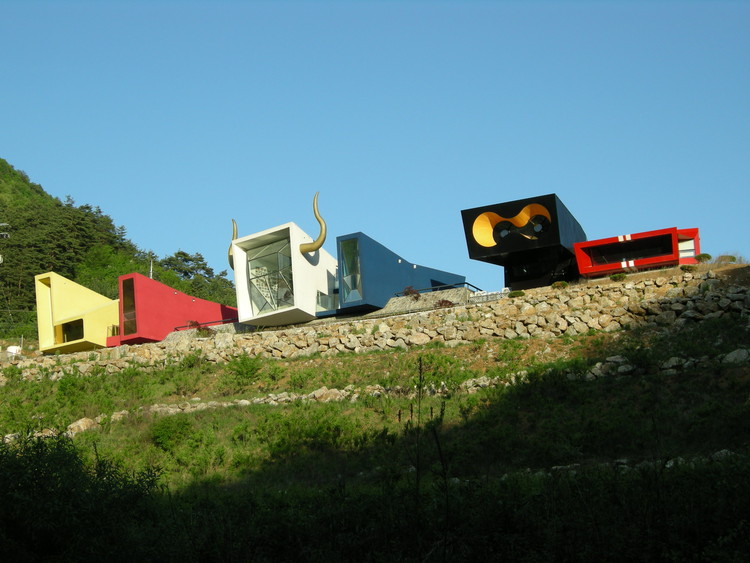 Text description provided by the architects. Rock It Suda is a name for the pension and it's concept. The client is a base guitarist, a member of the amateur rock group named Rock It Suda. On regular basis , they perform live, at the pension.

The site has a dry river, and an open view in front, and the other sides are, surrounded by the mountain range. The 6 ways of capturing the beautiful scenery gave birth to spatial contraction, expansion, and compression, then themes such as Spain, Barbie, Stealth+Ferrari, cave, and Korean traditional house were added.

Play_architecture is born, when giant soft hammock, shaped like tails are attached to hard secured architecture. It is hoped that, the wind, and movement made by people playing in the hammock, expresses the desire that architecture is not secure and unmoving.

Architecture is alive!: moving beyond it's limits...also, living in the realm of imaginations.

‘Pensioning’, as it’s referred to in Korea, it a term one used in this country only to describe a foreign activity. In continental Europe, a pension(pronounced ‘paan-shi-on’) is a boarding house or small hotel. Its Korean counterpart emerged as a new breed of accommodation earlier this decade. With the gradual embrace of enthusiasm for leisure and recreation, people started flocking to the suburbs to spend their nights relaxing, barbecuing and enjoying themselves. For city dwellers, in particular, the experience proved to be a liberating though temporary break from the daily grind and suffocating high-rise apartment buildings. Associated with exotic weekend getaways, Korea’s new pensions are built to resemble wood-framed, European, countryside cottages or theme park chalets. A small number of pension designs represent high-end luxury and architectural sophistication. Altogether, pensions are fantasy spaces, exaggerated yet accepted.

‘ whereas an apartment or house is often the result of the conflicting interests of its builders and occupants, this short-stay accommodation is a theatrical overstatement, ‘says architect Hoon Moon. A master at combining fantasy and reality, Moon is an outspoken architectural fetishist who has welcomed with open arms the populism ans commercialism that typify Koreanized pensions.

One of Moon’s clients, the 40-something leader of a band called Rock It Suda, wanted a pension that would double as a super playground. He asked Moon to discard the signature wooden-weenkend-house formula. The rocker’s suggestions for the project were inspired by the intense and mesmerizing impressions he’d brought back from his trip to Spain. ‘I could’ve gone metaphorically with the Spanish theme,’ says Moon. ‘But this image of big horns, like those you’d see at a bullfight, suddenly popped into my mind. I wanted to turn it into a collage and apply it directly to the structure.’

Of primary importance to the architect is spatial design that includes the surrounding landscape. The Rock It Suda project is on the outskirts of Jeongseon, a small dilapidated mining town bordered by a beautiful forest. The pension is between a main motorway(to the rear) and a slope (at the front). Rising from a low platform that covers part of the dry riverbed found at the site are six intriguing ans colorful holiday units, each with a distinctive shape, A separate café is at the back, a few meters away.

‘To create a different scene for each unit, I worked from the inside out. The exterior was done last. The average Koreanized pension for two occupies 33㎡. By extending and compressing this standard floor area, I produced various spatial configurations.’ Moon gave each volume a clearly discernible identity – car, plane, bull, Barbie doll – accompanied by a vibrant colour that gives the unit its name: Ferrari Red, Stealth Black, Spanish Blue, Flamenco White, Barbie Pink and Oriental Gold.

The units include various objects such as nets, hammocks and thick ropes. Suspended from the ceiling, some of them are in tapering extensions that resemble the tails of birds gliding on the wind or fins undulating in water. This clever invention not only adds to the poetic, dynamic nature of the complex but also portrays the pension as a living organism.

‘The moment I mounted those giant horns on the walls, I felt as if the entire structure had come alive,’ says Moon. ‘I’m intrigued by virtual space. I like the think of buildings hovering above the ground, flying around. Take a look at the nets and hammocks I’ve installed inside these structures – I call them “softies” or “action architecture”. They have a great potential for movement, interaction, evolution.’

The tails symbolize a transition from the physical to the virtual, which transforms the gravity-bound architecture into imaginative entries that evoke images of a flying jellyfish or some equally mysterious organism. Moon hopes his design will challenge the viewer’s perception of space and dimension. His goal is always to create ‘a three-dimensional architectural experience’.

A house whose exterior is wrapped in red curtains, a hospital-themed interior oozing sexual fantasies, a church decorated with the explicit image of a cross – Moon’s earlier designs are salaciously red, blatantly honest, provocative and often erotic. ‘I’m an ass who loves women’s derrieres and fishnet stockings,’ he admits. ‘But my superficiality has its own virtue, a kind of naked truth. Without this shallowness, how much more tedious and rational life would be. I like absurdity; it gives life a chace.’ Indeed, his self-proclaimed ‘absurdity’ is so absurd that it conveys purity, a purity that he translated into the animated, cartoonish vivacity of the Rock It Suda pension. Arguably the smartest realization of Moon’s pop-art concoctions, this is a commercially viable building based on an outrageous imagination.

In the Korea architectural community, notorious for its ascetic modernism, Hoon Mooon is a rare breed. He relishes his provocateur’s instincts. But the goal of his architectural creativeness is not to showcase racy work but to communicate emotional energy. He aspires to see the drab urban landscape burst with flamboyant exuberance and to witness people ‘tremble with the energy of emotion’.

‘In architecture, anything is possible,’ Moon prattles on. And the aphorisms continue:

‘Architecture should be void of limitations.’

‘when you’ve done away with all the no’s, you see new possibilities that can be interpreted in a positive light.’

‘Now that’s something to think about as you lie on your Barbie Pink day bed.