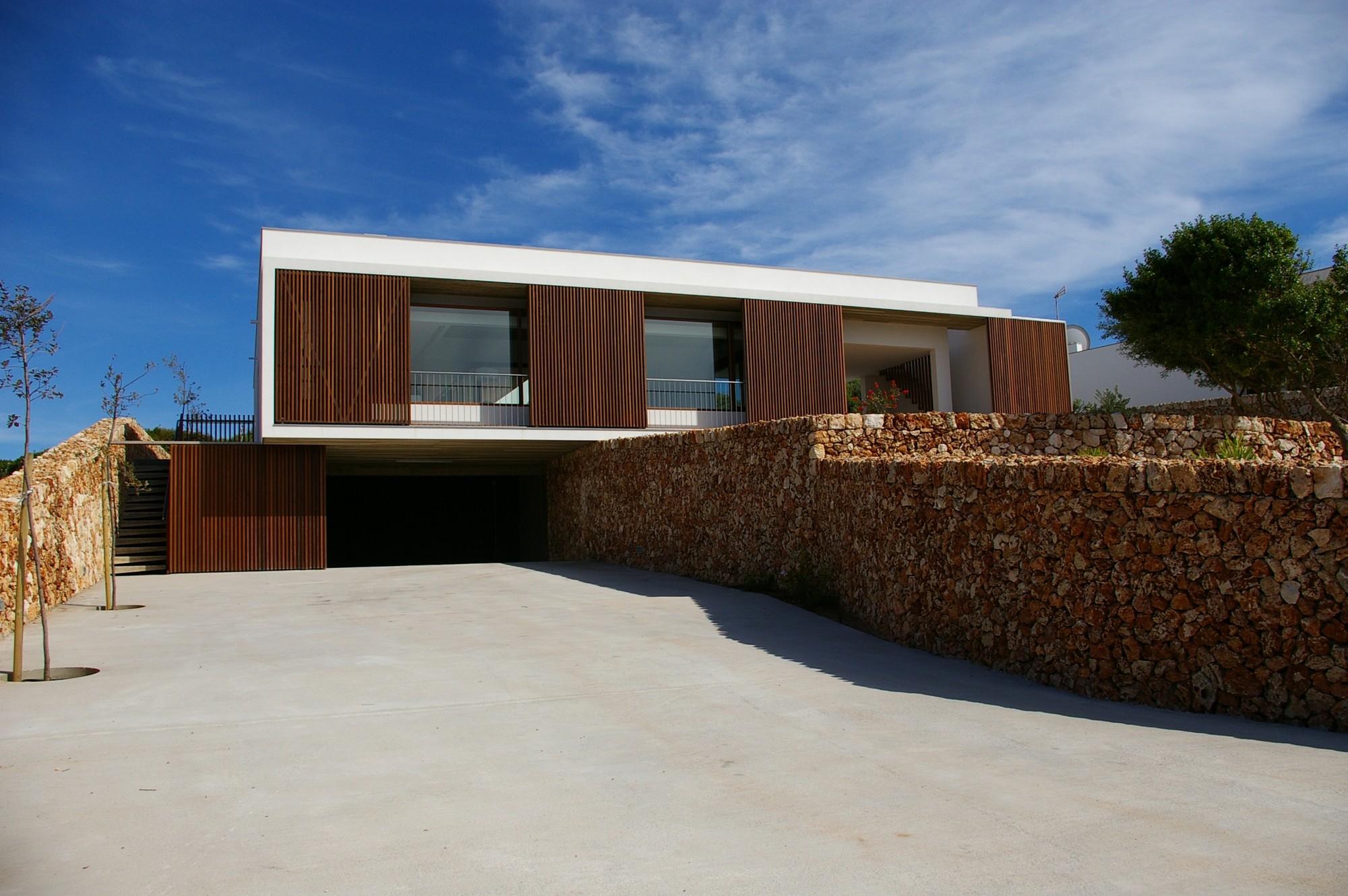 Text description provided by the architects. THE PLACE

The physical environment is the typical of a coastal residential development, an isolated place without service during winter time, and a nice place to spend the summer holidays without overcrowded touristic areas, with Biniancolla bay across the road. This is a plot with a long and narrow northwest ramp, with a 20m area of the Maritime Zone disabling half plot, with entrance from the west, from below, with views to the entrance and to the setting sun.

The program is a Tourist Holiday Home for 8 people and Excellent category (typology defined by local legislation), without architectural barriers to allow access to disabled guests.

The building is cornered by the upper boundaries of the plot, keeping away from the entrance and leaving between both an area too steep and exposed to be considered and used as a garden. The narrowess of the plot makes it difficult to create an outdoor space facing south, large enough to host the summer life and the pool, so the building is arranged in a "U" form being fitted against the noth and east party walls, and the line of 20 meters from the sea-land boundary, and surrounding a sort of "patio" and well south-facing pool embedded in the ground.

This first condicioning, coupled with the need to remove the architectural barriers, defines a clear and forceful volumetry. The building cornice is deliberately at the same height throughout its development in order to avoid “volume festival”, although the deck slabs are at different heights, depending on the covering space, they enable the emergence of skylights in bathrooms and kitchen, a sun terrace, and try to integrate the solar panels.

The program is organized within the building according to its situation, more or less close to the street (more or less private), and to its orientation. Thus, we find a first strip consisting of the kitchen, dining and living room, forming a single space in north-south direction, ending on a covered terrace and a staircase leading to the sundeck located over it. This first strip opens westward constituting the main facade of the building, through a gallery that filters the setting sun through a lattice formed by wooden slats, and selects grades of privacy and views through large sliding shutters also formed by the same slats. This filter-diaphragm matches the garage doors, made of the same material and with the same design, and configures the image of the building, directly matching also the southern neighbor (which I projected and built a decade ago).

The first strip program also opens to the “patio”, private and sunny, which is the heart of the house.

The second strip (the center of the "U"), perpendicular to the first, is located north, occupied by the lobby, the stairs leading down to the garage, two bathrooms and laundry, including a clothesline. The corridor runs through the patio, as in the cloisters, turning ninety degrees in the third strip and giving access to the bedrooms, looking east through a window flush with the ground, which is higher than the house at this point . Thus visually the bedrooms take over the adjacent land and are protected from the prying eyes of the opulent neighbors. Down the corridor, as it should be, the third bathroom, necessary to describe the house as "excellent".

The pool is located at south. It borns in front of the "patio" and runs to the east due to lack of space, touching the house and embedding into the ground, which deforms it slightly, giving it a certain vibration characteristic of tamed nature. 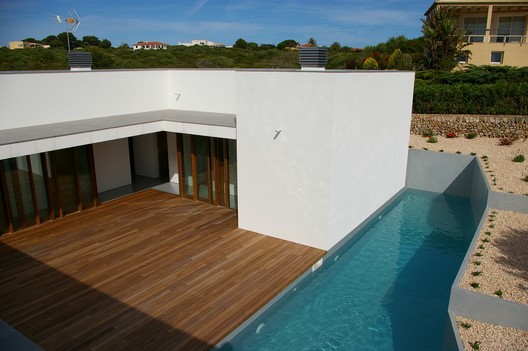