Designed by Hooba Design Group, one of the major aims in their second prize winning proposal for the Persian Factory in Iran was coming to an integrated spatial pattern, which fits both the new part of the existing structure and the site plan of the factory. In order to achieve an integrated organization, they used a spatial diagram, which defined both the inside and outside of the project simultaneously. This diagram is influenced by the building’s site, and also the existing status of building and additional sections. More images and architects’ description after the break.

They wanted to achieve this volume design concept by including all components of the factory such as the enclosure wall, the security building, the official building, the presentation part, the manufacture building and the landscape of the project. Another goal in designing this project was defining and introducing identity of Persian factory building; therefore we use the organization’s color, and designed the idea to differentiate the combination of white and blue from the perspective of vehicles driving past the factory in the adjacent highway.

We use light concrete blocks with turquoise glaze (organizational color of Persian factory) to construct the walls. Since the concrete can be mass produced, it is very much cost-effective and economically justified. In the existing structure, considering performance speed and cost reduction, the current status of the covering material is more simple and integrated. Regarding the dusty status of the area, the material is chosen in a way so it doesn’t lose its quality over time.

Water is designed on the façade of the project as an element, which introduces the factory's production, and also the water motion is in compliance with volume morphology and the morphology of the façade represents the motion of color and water; that considering its scale in the volume it is considerably visible from different parts and angles of the highway.

Although the roof is designed as a functional space for the factory,it is also a comfortable space for seminars, ceremonies and a public introduction of products. It can house large capacities of people and is created through a path that is an open exhibition space with a minor slope (6%). This part, which is designed through an integrated ramp, is not only attached to the current status of the volume, but it also defines the outside borders of the factory. People can access this part through a separate entrance accessed from the street without having to enter the factory. Along  this ramp there are areas dedicated for temporary representation of bathtubs and factory products.A part of the roof of the factory is designed for reception and seats along with outdoor audio-visual equipment.

A clothed-moving roof have been designed and placed in the seating area, in addition to that, the other part of the roof is used to set-up solar panels, in order to absorb the maximum southern sunlight. The energy saved by the panels is used to provide lighting for the landscape, and also to heat the floor pipes of the landscape, implemented with the aim of melting snow in the shaded areas of the site, and last but not least, to provide electricity for the waterfront façade. The relation between the volume and the factory internal performance of the factory is based on the creation of a dynamic motional-presentational space besides the volume of factory.

Therefore, a void has been designed all the way through this area of the factory, which defines the paths of motion ramps within the factory. This then creates a suitable passageway for the visitors of the company, without having to enter the enclosed workshop areas of the factory. It’s worth mentioning that some parts of the walls are shielded with glass so that visitors can observe the activities inside the workshops as well.

This path directs people to galleries that represent the main products of factory. Some roof skylights are also placed in this space to direct in some light for the walking paths. The factory is designed so that it is mainly divided in to three main zones, with one zone being the workshops, where activity-related productions are happening – they mainly exist in the existing skeleton. The next section would be the management zone, offices and also galleries. It is worth mentioning that in spite of the existence of different zones, managers can easily have access to any parts of the factory.

The gallery is easily and directly accessible by the official zone through ramps and steps.The management department is able to easily have access to this area as well. They can also show the production and workshop’s zones to visitors along the way. The factory’s access concept is to have a complete rotation from the truck entrance, for comfortable and fast loading and discharging loads in the landscape. Therefore an open passage with a suitable height has been designed at the end of the interior space in order to facilitate truck movement. 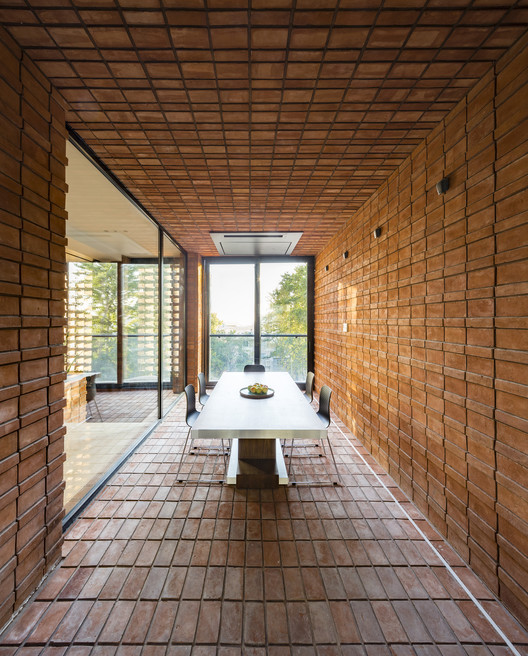