AGi Architects, in collaboration with Bonyan Design, recently won the competition to build the General Department of the Information System in Kuwait. Their design is based on three principles: representativeness, security and functionality, turning the complex - with a total gross area of 135,482 sqm - into a strong civil icon representing Kuwait’s Ministry of Interior Affairs. The building design aims for the clear transmission of a conceptual duality it derives from: technology, innovation and transparency on the one hand versus strength, stability and security, which are inherent to the Ministry of Interior Affairs. More images and architects' description after the break.

This concept is driven in the building by two contrasting layers that are superimposed onto one another. From afar the building is perceived as a light volume elevated from the ground floor, becoming a landmark in the urban landscape for the citizens, while a closer approach will show the massiveness of the stone plinth, a lower part of the building that is opened to the public the main gates and lifts from ground to hold the upper levels lighter glass structures that house the offices of the various departments.

The podium is envisioned as a thick occupiable wall, engulfing the complex on all four sides, protecting and safe guarding the building with minimal openings to reinforce the security. The protective wall is only interrupted on the ground level to allow for public penetration into the inner confines of the building: this is achieved through three main openings that are separated and treated differently, catering to the various users of the building, such as employees, VIP guests and regular visitors. The visitors’ entrance is capped with a large cantilevered stone, inviting individuals to enter. The podium is raised to a height of 8 meters, this dimension along with the use of continuous matte stone and a large cantilever elicits a sense of empowerment and security.

Above the podium, the various directorate buildings grow separately inwards and upwards from the monolithic security wall establishing connections to one another through visual transparency, evoking a campus-like environment. This transparent façade is covered using a light protective skin that allows for sunlight penetration whilst simultaneously preventing over exposure to harmful direct light.

During the day, the design of the campus-like buildings and openings allows for light to flood into the innermost sections of the site, and at night the transparency of the upper structure transforms the volume into a glowing star, emitting light and attracting attention from afar, marking the site and becoming an icon for the city and the country. Advanced technology is to be introduced not only for security and office operations, but also for building management and regulation. The integration of this technology coupled with a functional organization plan and formal composition will result in a unique building that represents a sense of state unity, strength and pride.

The main lobby is an extremely crucial element of the proposal developed by AGi architects in collaboration with Bonyan Design. The complexity of the circulations in a building like this makes it very important that the spatial organization enhances clarity and effectiveness. This lobby is conceived as an inner urban space where moments of visual and functional interaction occur between the “public” and “private”, similar to daily life synergies.

As already stated, there are three main access gates into the building: at the front façade, two large arches will separate the circulation flow of the Undersecretary’s VIP guests from the normal visitors of the facility, where various degrees of security control and privacy may be accomplished. Employees will gain access into the building from the rear, through a secured entrance and bridge directly linked to the employee parking structure. Thus maximizing the efficiency of flows based on the separation of the entrances for the various types of users. The ground floor is engulfed by a service wall, doubling up as a defense wall for protection to enclose the building. The escape route and service connections are established from this wall across two levels, with a service road located around the perimeter for vehicular access.

This surface fulfills its conventional function as well as provides the necessary infrastructure in order to supply information services to citizens in public areas. The smart pavement allows both, the interaction between the environment and the wayfarer, and the knowledge of “what’s going on in the street”. This system also provides connectivity services and geopositioning where antennas and GPS are unable, while does not interfere to the aesthetic.

The transparent office workspace volumes suspended above the main lobby act as skylights enabling light to penetrate through the vertical glass facades. The vertical placement of the skylight is important to Kuwait’s climatic conditions and is proven more successful than a horizontal plane. A horizontal glass roof increases energy consumption and is difficult to clean and sustain elevating maintenance expenses.

The office building above is divided into equal bays which are the same width; the bays are separated by green terraces located on various levels. In a few cases, these terraces drop down to the ground floor level creating courtyard spaces. The skylight form goes unnoticed from the outside where it is envisioned as a continuous glass façade encapsulating the linear volumetric office buildings, only when one is the main lobby does one realize the vertical skylights and voids. From the main lobby as one looks up towards the offices, privacy is achieved from the vegetation planted on the raised terraces blocking views into the offices.

There are three main parking areas that serve the building and its users. Employee vehicles will be allocated to the parking volume at the rear end of the plot, apart from two areas for surface parking, for visitor’s parking and VIP guests.
Underneath the building, there are two levels of basement parking. The first basement is divided into six areas corresponding to the various directorates for better organization and flow of vehicles and pedestrians.

The office work spaces are located above the podium and main lobby and are comprised of linear volumetric buildings that cross the site by tilting and zigzagging to create numerous courtyards at multiple levels. The spatial organization of the offices follows the combination office scheme, which is proven to be the most efficient work space model thus far. The combination offices are made up of a consolidation of workstations in a single room with direct link to a common central core that is suitable for a variety of uses, i.e. the combination zone. The individual workstations are single offices with divisions set along the façade, each including a small conference or meeting area. The typical workstations offer:
- Direct visual contact with the outside
- Individual control of the work environment conditions
- Ergonomic design, adaptation to the users’ requirements

The transparent glass envelope of the offices is wrapped using a second skin that protects the building from the harmful radiation of the direct sun. This secondary skin creates a new façade that is used to ventilate the building. During the day the façade works as a chimney and at night it is used to cool the building. The skin is made up of metal louvers with a shiny mirror finish placed perpendicular to the sun radiation deflecting any heat from the building, while simultaneously allowing views to the outside. 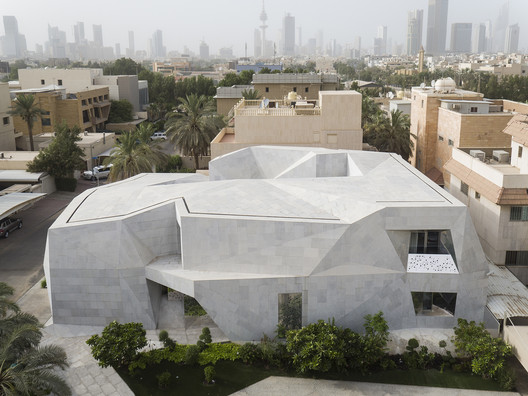