More images and the team's description after the break...

After listening extensively to the community and Miami Beach stakeholders, our concept plan unveiled in February was for a world class convention center, increased site connectivity, the preservation of key elements of the site that are important to the community and more open space and recreation facilities. Now we’ve taken it from the concept stage to the master plan stage, adhering to all of those key ideas to create a world class convention facility that allows visitors to enjoy all that Miami Beach has to offer.

Our vision is to dramatically improve the convention center and optimize the connectivity throughout the site. Our plan brings a sense of engagement and vibrancy that complements the rest of Miami Beach, while using a light touch to keep the programmed uses to the right scale. A focal point of the proposal is a civic and cultural band running along the southern end of the property that will comprise a modernized Jackie Gleason Theater, a new cultural venue, the existing Miami Beach City Hall, and active landscaped areas.

The orientation of the convention center and hotel entrances to the south, along with the activated public space and reimagined 17thStreet corridor, will draw guests to the historic Lincoln Road retail and entertainment area. Outside the convention center will be a network of shaded, undulating green spaces imagined by the team's landscape design firms, Michael Van Valkenburgh Associates (MVVA) and Raymond Jungles. The public spaces will create a continuous but varied park-like environment capable of hosting community events throughout the year.

While the Miami Beach Convention Center (MBCC) is a great cultural and economic asset for Miami Beach, it has become a physical blockade within the city. Here beach stops and asphalt begins, with a series of open parking lots, relentless closed facades and a disconnected urban fabric. By effectively rotating the building, we have managed to make it simultaneously a better citizen within Miami Beach and a more efficient convention facility. Our plan reorients the Exhibition Halls north to south, simultaneously clarifying the building’s internal organization and its relationship to the city around it. With loading consolidated to the north, and the new concourse and main entry located on the south, the building has a clear face to Lincoln Road, while maintaining access on the east side for visitors walking from the nearby beach hotels.

Putting it on Top – Compact Density

Extensions to the Existing City

Around the perimeter of the site, new programs extend and amplify the character of the area’s existing neighbors. To the east, the residential neighborhood of Palm View is extended across Meridian. At the South, new cultural and retail buildings activate the gap between the Miami Beach City Hall and the Jackie Gleason Theater to create a new Civic band between the Convention Center and 17th Street.

The new green band that surrounds the Convention Center restores an important buffer that was lost with the building’s last expansion. In its initial incarnations, a wide area of green extended along Washington Avenue to the east and along the Canal to the north. Our plan creates a new green buffer around the south, west and east sides of the MBCC and a green promenade along Washington. This restores an important open space in Miami Beach that is simultaneously a great resource for the Convention Center. The site is transformed from an area dominated by asphalt into an oasis within Miami Beach. Today almost one-third of the site (16 acres) is surface parking, loading and roads, vs. just three acres of roads in our plan. Over 28 acres of publicly accessible open space integrates the entire convention center site into the rest of Miami Beach. 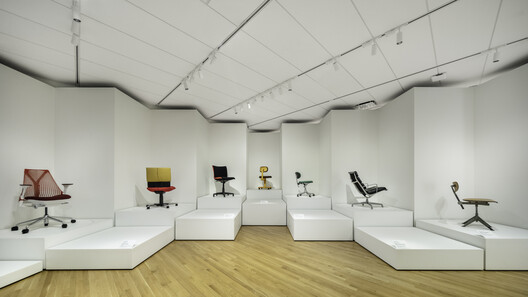 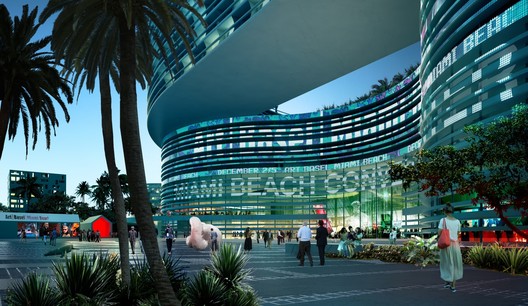