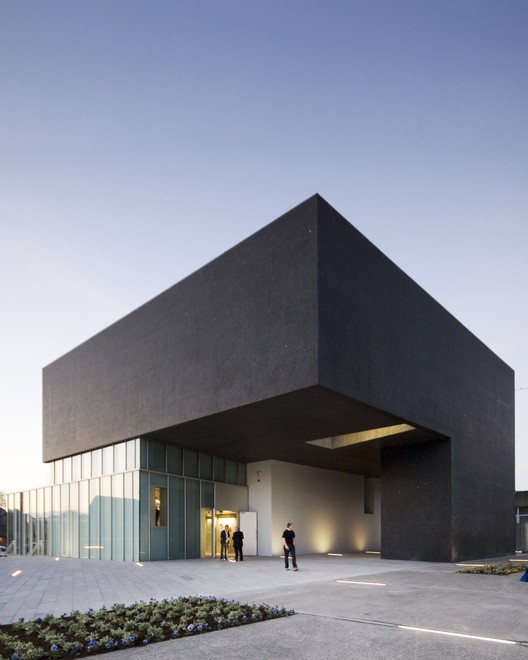 Text description provided by the architects. In Irish towns, the anchor or pivotal element which forms the centre is often a market, or a church or in many cases a ruin. In the historic town of Trim, just five miles away, the monumental bulk of Trim Castle forms this mass around which the town rotates. Navan has many similarities with Trim, in its grain and its adjacency to the River Boyne, but this centering element is absent.

The site for this project occupies what was the historic market centre Navan but now feels like a void used only for car parking except on Fridays when a market still takes place here. On the perimeter of the void are two stone churches with their spires and their dark purple slate roofs. But it is one of the most difficult spots in the town where the road infrastructure dominates overbuilt fabric. The sloping ground led us to think about this project as a man-made rock outcrop. We have worked the ground to make ‘slow’ space around which the ‘fast’ trafficked space’ exists. We have made a new raised ground, a new territory, an elevated walled garden. The theatre occupies the space between but interlocks with both.

The changing rooms and stage drop into the plinth. The fly tower projects up into the walled garden. The floor of the theatre follows the contours of the site forming what we call an ‘an interior landscape’. We did this because we felt that, as in the town of Trim, a ‘massive’ presence was needed here, to stake out and re-invent this place, making this new cultural anchor register its arrival. We have never made such a strong intervention in an Irish Town. But here, where so much seemed to have been lost, we felt a strong necessity to generate a new point of energy. The new arrival sets up a dynamic choreography, with the neighbouring public buildings and sets the scene for the re-instating of the historic market centre.

Born as a Theatre and Courthouse…..re-born as a Theatre and Gallery. Conceived as a courthouse on top of a theatre, the brief changed during construction. We saw the potential of this mix, symbolically and socially. A private introverted courthouse above and the open public rooms for the community and the theatre below. The courtroom at roof level was to be used by the Theatre groups when the courts were not in session. The arts centre presence would somehow humanise court activities. The theatre of the courtroom would be used by actors.

Three separate points of entry necessary for the courts were to be shared with the theatre. Defendants and actors. Judge and Director.Court audience and Theatre audience. When the courts did not proceed the top floor was ‘converted’ into an exhibition space. But the original brief gave the building a potency which we could not have invented.

It also presented certain dilemmas. What was to be a hybrid use was now to have one use. The result is a quiet contemplative art space, at a remove from but connected to the active floors below. The external void in the cantilevered roof becomes more charged…being the ‘eye’ to the public space below.

We generated a sense of intimacy by making an organic contoured floor. This sets up a dynamic relationship between the audience and the stage and gives the sense of foreshortening space. A point of reference for us was Hans Sharoun’s theatre designs where he divides the audience into groups so that a dynamic between audience and stage is generated.  A window to the sky and a window to the entrance foyer allow some natural light into space, provide a connection to the outside world, and allow the visitor a view into the theatre on entry to the building. These can be closed off during performances.

Component Parts. The Limestone plinth forms the ground of new south-facing civic space located at the high point in the site, elevated over the sloping pavements and surrounding roads.  The serpentine foyer wall wraps around the theatre is designed like a ‘curtain’ with varying levels of opacity and transparency, revealing the activity behind, but not fully, attracting attention by day and especially in the evenings when it will read like a ribbon of light suspended over the pavement, the audiences visible from the Fair Green as a sort of ‘shadow play’. The hovering grey-black marble mosaic slab, which cantilevers over the civic space, invites the public to enter into the realm of theatre without passing any door. This material will fade over time and was chosen to match the colour of the slated large roofscapes of the adjacent churches. It has a white fossil marking as does the limestone plinth. The ‘cut’ in the  roof gives a glimpse of the gallery above  and allows a shaft of light to signal the entrance doorway

Structure. The enclosing wall of the raised walled garden is, in fact, a large upstand beam achieving large scale spans. This beam minimises the necessity for columns and supports, making free spaces below. The three independent staircases required for the working of the courts,i.e, for the judge, for the public, for the defendants, form the three main supports for the roof. The ‘defendents’ stairs and is now used as backstage access to the flytower and for the delivery of art works to the gallery above. The ‘judges’ stairwell has been appropriated for gallery storage. 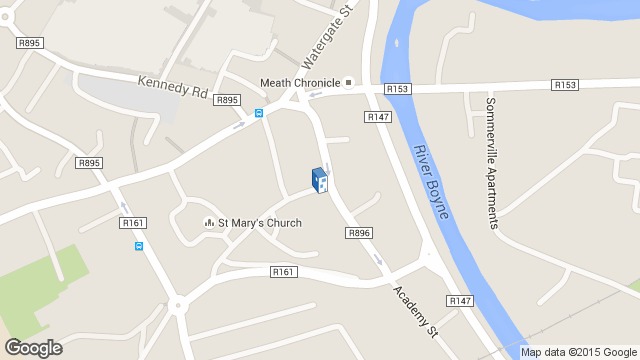