Inspired by the movement of the curtain, an element inherently connected with the theatre, this second prize winning proposal for the Operlab competition focuses on this movement to induce the emotions of the viewers. Designed by Rafal Oleksik and Krzysiek Stepien, it was crucial in the proposed concept of the pavilion to induce such emotions to encourage people to enter the facility, and at the same time, allow them to become a part of the show whether it be exhibitions, screenings, a concert or a discussion. More images and architects’ description after the break.

In the theatre performance the curtain’s opening and closing symbolizes movement and changes: the beginning, changing acts and stage scenography, as well as the end. It is during the opening of the curtain that the first images and sounds related to the performance emerge. The pavilion is only a half-translucent outer shell, which, through its transparency, informs us that something is going on inside, while for people in the middle it is just a background for the events that take place there.

The basic component of the interior is light. As in the theatre, where there is movement, the openwork wall in the proposed facility creates in the interior the constant play of light and shadow during the day. Every minute the pavilion changes along with the way of the sun. Here, the mobility is treated not only literally, through changes in the arrangement, but also metaphorically as a continuous movement of the intangible space.

The pavilion was designed to permit activities of various natures. It is an open space limited by an openwork elevation at the same time constituting the roofing support structure. In addition, the facility provides a storage room for the exhibition furniture and the room of light panel walls for a dressing room. All the rooms are available from the inside. Moreover, a space in the form of additional panel accessible from outside was foreseen at the external wall for a multimedia kiosk.

The aim of the project is the mobility of the structure, the ease of assembly and disassembly, and the ability to use only certain parts of the pavilion. This was achieved by using 24 modules [18 external + 6 internal] that can be combined and separated. For safety reasons, technical and dressing rooms are closed. It is possible to close the exhibition part at night and to install alarm systems as well as monitoring.

Each module consists of a floor lying on a steel grid, light roofing of two layers of flat aluminum plate connected with a trapezoidal plate between them, and aluminum bars with a circular cross-section of Ø 50, holding up the roof structure and at the same time acting as a facade of the pavilion. Depending on whether the module is external or internal, there is different number of bars. Some bars were also designed to act as the roof drainage pipes. The walls of the dressing room are to be panel, aluminum elements of 112.5 cm in width. 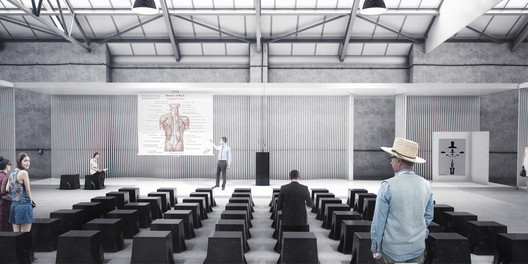 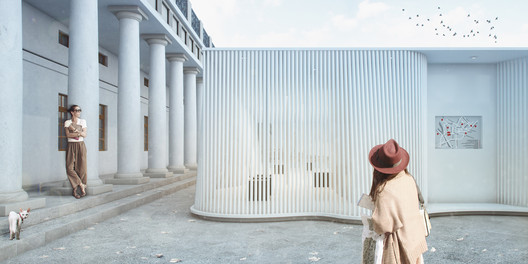