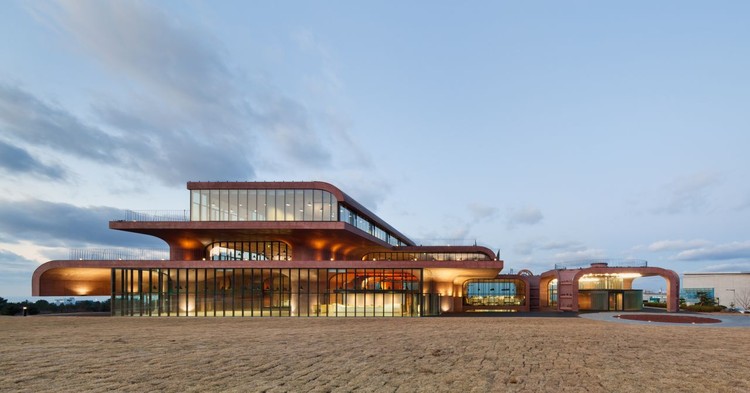 Text description provided by the architects. Daum is an international IT firm based in Korea, primarily known for its web portal services. Unlike its competitors that are typically located in metropolitan areas, Daum has been planning to relocate its operation to an undeveloped site within Jeju Province (an autonomous island situated off of the southern coast of Korea) for the past 8 years. Largely known as a major tourism hub, Jeju Province has been encouraging the implementation of other industries in the recent years, one of which is the development of the island's technology-based industrial complex. Considering the fact that the urban population of Korea has grown from 20% to over 80% in the last 50 years – which makes Korea one of the most urbanized countries in the world – Daum's radical step of exiling themselves to the rural Jeju Province can be framed as a utopian gesture, comparable to Silicon Valley of the late 70’s in America, as a rebellious attempt to move away from the urban setting to reinvent an independent, creative work community. Another dilemma that urban workplaces face in the 21st century is that while the nature of the working organization is becoming more horizontal, the spaces are becoming vertical. Therefore, the generous conditions provided by Jeju Province counters this problem as an opportunity to imagine a new type of spatial organization to match Daum’s creative, horizontal working organization.

Over the course of the next decade, Daum plans to gradually relocate its operations. For the development of the IT complex, Jeju Province has designated a vast, undeveloped land of 1,095,900 square meters on the island's northern mountainside, in close proximity to Jeju University. Daum's site, 300m wide and 800m long at its maximum, is the largest central plot within the development area, measuring 132,000 square meters and parallel to the main road in its longitudinal direction. Given this scale, one can imagine Daum's complex built progressively over time, a masterplan growing organically across the site's green terrain. As a counteraction to the typical office park development – a homogeneous field of low-rise, non-contextual office blocks floating in a sea of parking lots – Daum's masterplan is designed as a linear growth, dividing the site into opposing rural vs. urban zones and informal vs. formal zones. The urban zone will be defined by a dense, low rise, 70m wide and 800m long superstructure. This proposal allows functions to be optimized, supporting an efficient urban work zone – an “information superhighway,” symbolically as well as literally – and a vast area of park-like space dotted with facilities that will house community activities such as farming, sports, etc. Each of the buildings in the urban zone, no more than 5 floors high, are situated a floor level above the previous to accommodate the site's gradual 60m rise, taking advantage of this gentle, uniform slope to connect the facilities at different levels. This progressive alignment promotes movement across the site vertically, horizontally and diagonally, effectively increasing the efficiency and unity of the masterplan.

During the design process, we thought of a way to create a system of structure that could potentially serve as the grammar for the entire territory. To formalize this notion, we designed five elementary structural modules of 8.4m by 8.4m with variations of extrusional or rotational attributes, to either extend or to end the structure as necessary. As a combination of these modules, the structure expands horizontally and vertically. With these basic “formal structures,” we were able to form various forms of vaulted, or cantilevered spaces within large open planes, while also providing a way for the entire campus to grow organically to meet the unpredictable needs of the future. As a result, large spaces of 12.6m spans or 6.3m cantilevers are supported by vertical piers with small 3.8m spaces within them, creating a field of spaces of various degrees of size and enclosure.

As the first building within the masterplan, Daum Space is located near the center of the site, to provide the office space for the first 350 employees as well as other subsidiary functions. As a combination of these modules, we were able to design the Main Center as a five-storey building that is open on all four sides, allowing the scenic views – a nearby forest to the west, Halla Mountain to the south, and the ocean to the north – to penetrate into the interior, creating a favorable working environment. The ground floor serves the various shared / public functions. The cafeteria, an open lounge, a café, a small pavilion for Daum’s public relations purposes, a game room, a gym, and meeting rooms are located here, as well as an auditorium that is isolated from the work space. The inclined site meets the entrance road on the southern end of the 2nd floor, where one enters the auditorium. The main entrance to the building is located further into the site, with an outdoor space separating the two entrances. The 2nd floor is provided with a double floor ceiling height and the largest open plan work space, composed of the reception area, office spaces, and a block of conference rooms with a library above it as the 3rd floor.

As one progress upward to the 4th and 5th floors, the floor areas become smaller, allowing for more isolated, intimate office spaces, project rooms and conference rooms, together with outdoor terraces (of either wooden decks or grass). Inside the piers, which act as the vertical structural elements on all floors, are round or rounded rectangular spaces for various core services, HVAC, stairs, elevators, as well as programs such as smaller meeting rooms, restrooms, and lactation rooms. As a result, Daum Space has systematic rigor, but by creating an array of spaces of various scales and qualities, it feels like a village without being picturesque, as a vertical/horizontal field of spatial experiences which anticipates further growth in the near future. 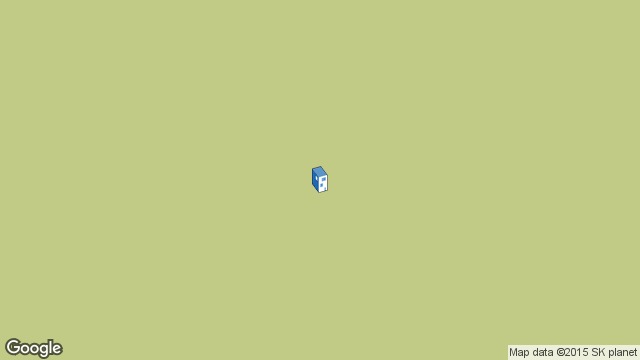