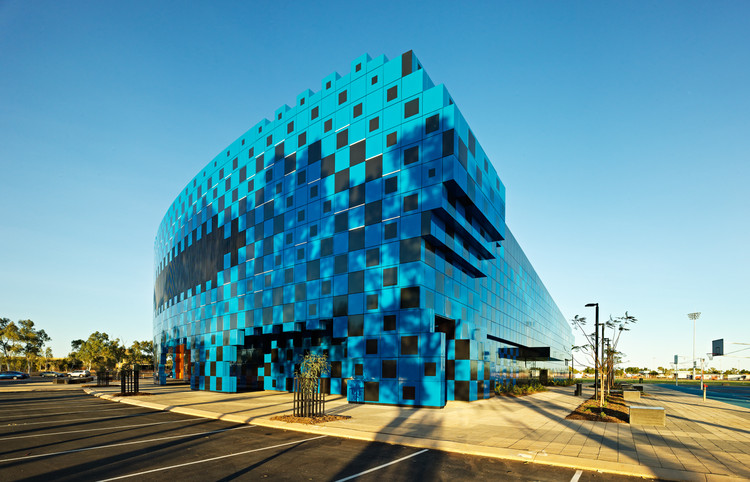 Text description provided by the architects. Wanangkura Stadium is Port Hedland new multi‐purpose recreational centre. The name for the centre was chosen from hundreds of local submissions and means 'whirlwind' in the local Kariyarra language. The title pays tribute to the centre's design, which architect Sophie Cleland likened to a cyclonic pattern, creating a 'shimmering, rippling effect on an otherwise flat landscape'. Western Australia Premier Colin Barnett called the Centre '... a spectacular piece of architecture that will become a landmark for Hedland'.

Located in Western Australia's northern Pilbara region, Port Hedland is highest tonnage port in Australia, with global links to China, Europe and Japan. It is also a place of extreme climatic conditions with seasonal cyclonic periods and extreme temperatures during summer. Managing these conditions becomes a challenge for architecture, with buildings designed to withstand cyclonic conditions to Region D category 2. The mining industry also dominates the landscaping and operations and the town, providing a large fly‐in fly‐out population.

The main gateway into the town is through the air; not roads. The town is located at the top western end of Western Australia and is surrounded by a sea of red earth at the edge of the Pilbara in town infamous for Australia’s iron ore exports. Flying several hours across the desert of the Australia outback you see a town come into view that has a suburban domestic like quality with a urban layout would be familiar in the outer suburbs of Melbourne. The bright green grass of the ovals are clearly the most identifying features. This ‘gateway’ provided the first primary view of the Wanangkura Stadium and the approximately 3500 square meter roof which makes a significant feature in the landscape. We chose to treat the roof as another façade and wanted to celebrate the local club football team The South Hedland Swans whose team colours are black and white by creating giant stripes in the roof profile. This creates an impressive view from above but is also an important feature from the oval as the roof is clearly visible from the ground and oval perimeter.

The project site is located at the Kevin Scott Oval on the fringe of South Hedland’s flood plain. It is a significant destination point for major sports and social gatherings for the local community and fly‐in fly‐out workers. ARM was engaged to design a scheme for the multi‐ purpose sports facility, concurrently with the masterplanning for the surrounding playing fields for future expansion. The main building houses a new indoor playing court, a gym, squash courts, club rooms for local football teams and upper level function rooms. Adjacent to the main building are outdoor playing courts for netball and basketball.

Our approach to the design considered this building as a mirage – a shimmering, rippling effect on an otherwise flat landscape. Using a 'halftone' pixelated technique, the buildings entry facade acts as a clear visual image from long distances, whilst being highly agitated on closer inspection. The opposite side faces the Kevin Scott oval, accommodating related facilities along the oval, including a spectator’s stand, change rooms and spectator suites.

In preparing the concept design, ARM first visited the site and met with Council and project stakeholders, which included different sporting groups and community members. The design had to work hard to meet the requirements of each sporting code, while also taking advantage of opportunities for efficiency, such as sharing change rooms. Circulation and access needed to consider the varying requirements of spectators, employees, paying members, and local and visiting sports teams.

The Wanangkura Stadium is an excellent example of the advantage offered by ARM’s unique design approach. Our clients in Port Hedland knew it would be difficult to create an ‘iconic’ building within the restrictions of their location, climate and budget. With lateral thinking and innovation, we proved that something more was possible. 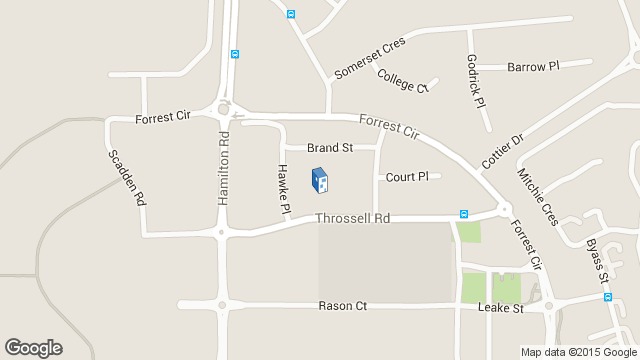