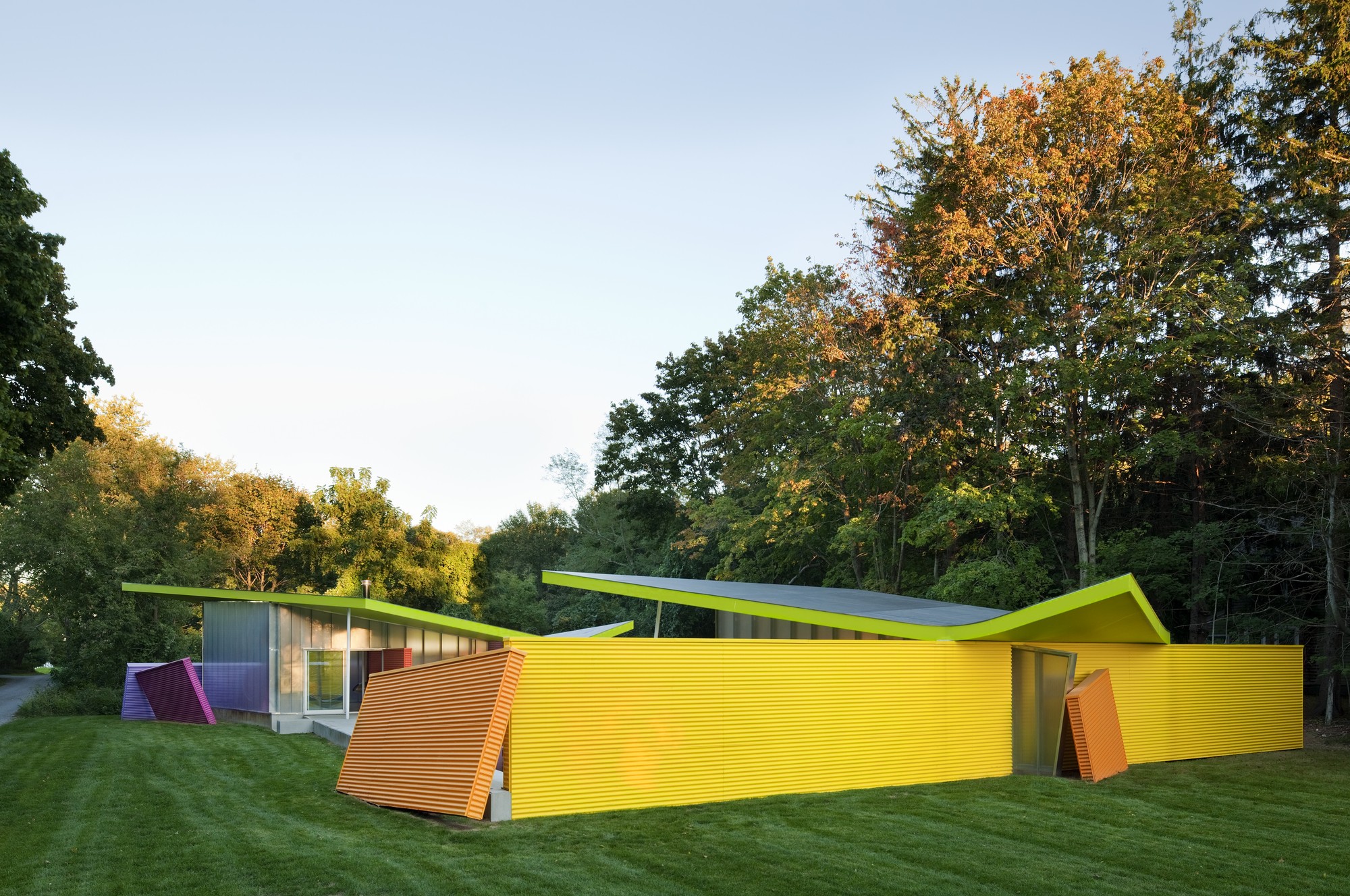 The Shelter Island Pavilion gave us an opportunity to bring our influences, inspirations, aspirations and years of architectural design to bear in one place with only ourselves and our budget to define the boundaries. We chose to draw on specific inspirations such as Mies van der Rohe’s Barcelona Pavilion, Le Corbusier’s Ronchamps, and Marcel Breuer’s Wassily Chair.

These works were groundbreaking and truly prescient; each was conceived in part as a prediction of the future of industrialized production and construction.  Keeping the plan of the Barcelona Pavilion in mind, we designed a house that explores the reality of the industrially-produced materials and methods of our own time.  Unlike the Barcelona Pavilion that used then-exotic materials, we chose to utilize more common materials but rendered them striking in usage, pigment choice and detailing.

Cubists looked beyond the mechanical view of how the eye sees and employed the brain’s ability to remember and anticipate, allowing one to take in a seemingly disjointed array of phenomena but still have the whole make sense. The increasing plasticity of lightweight building materials allows us some of the Cubists’ slight-of-hand to simultaneously evoke the immediacies of built form as well as architectural dream states – the hovering roof, translucencies between inside and outside, and walls that are not walls.

Advancing material technologies have expanded the available palette through increased color intensity, optical effects and applications.  Sir Isaac Newton ovserved the different behavior of color created with pigment and color created with light. The Impressionists and Fauves experimented with Newtonian principles to create light effects with pigment. These experiments have redefined thoughts on how colors relate to one another. Guided by Newtonian color theory, the intense palette of the house allows richly-colored reflected light to pass through translucent walls, suffusing spaces with a delighting glow.

In addition to the rigorous studies of perspective and color theory, environmentally sustainable materials and methods played a large factor in generating the design. First and foremost is the size of the project. In a time where new homes strive to maximize square footage, we consciously kept the enclosed footprint to two small pavilions totaling 1100SF. The home is designed for all seasons with the use of the spaces and the areas conditioned are modulated based on seasonal weather. Its heaviest use is during the summer.

Large sliding doors allow indoor functions to flow into outdoor terraces and gardens during the summer when additional space is desired and indoor conditioned space is rarely needed. The opposite occurs in winter where living occurs in a much smaller conditioned footprint. The house is one of the first on Shelter Island to use geothermal heating and cooling. Even so, it is rarely used in the warm season as we incorporated many passive design elements into the architecture.

Solid walls on the south and west side of the building block the intense summer sun while floor to ceiling translucent double polycarbonate walls allow north and east light into the space as well as providing a much higher R-value as compared to traditional glass. Large sliding doors and windows are carefully placed to take advantage of the east/west sea breeze to cool the interiors. Large roof overhangs provide needed shade for the pavilion interiors while providing sheltered space ideal for outdoor living.