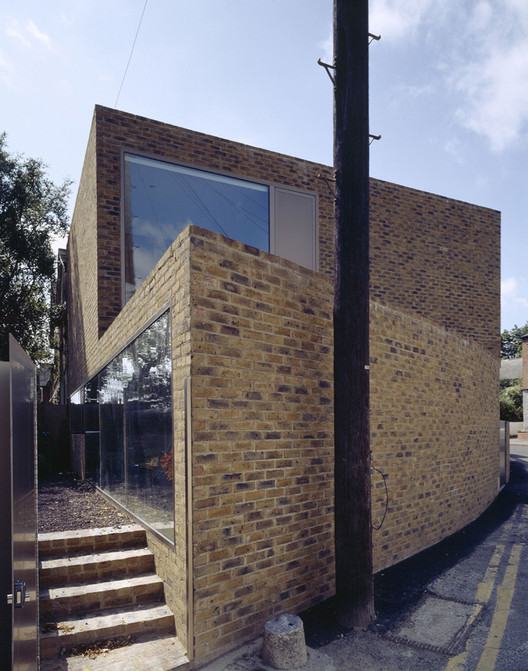 Text description provided by the architects. The house is located in a conservation area close to Dublin's city centre, on a small but prominent infill corner site at the junction between Mountpleasant Avenue and Richmond Place. A modest dwelling built to replace the existing cottage located on the site.

The accommodation consists of 2no. bedrooms, 2no. bathrooms, kitchen, utility and living / dining area set over three separate levels. At two stories the house remains substantially in character with the nearby terrace of houses and forms a low book-end building to Richmond Place, while making a strong contextual response to both the unusual site configuration and the prevailing architectural context, in particular the gable end of the house immediately opposite on Mountpleasant Square.

The ambition is to build the entire site, maximising the footprint of the building and visually extending the living area into the external courtyards formed to each side. The geometry of the existing site is the principal generator of the building form. Approximately triangular in shape and with a pronounced curve along Richmond Place, the house adopts the site boundary line along its north and south elevations and aligns with the adjacent terrace to the east and west.

The resultant form is carved twice to make two compressed entrance spaces one to the front and a smaller one at the rear. In order to maintain the low-lying nature of the block fronting to Richmond Place, the living room is sunk 750mm into the ground, following the natural fall across the site.

The house exploits its section to create a series of interconnected but separate spaces of varying height and dimension, creating a sequence of compression and release as one circulates through the plan. The main bedroom opens out into the roof-lit stairwell by means of a work desk and folding screen forming a potentially seamless flow of space connecting with the living room and kitchen below. The kitchen itself is placed at the entry level and overlooks the living space across the worktop, with the storage units opening into the living room. The concrete desk formed by extending the ground surface into the building, faces west into the courtyard and the neighbouring street beyond.

Externally the house is faced entirely in brick, directly referencing the neighbouring house. Satin anodised aluminium windows are brought flush to the surface of the outer skin to accentuate the tautness of the form and emphasize the two entry points. Internally a simple palette of materials is deployed, white oak for the service areas, concrete, plaster and rubber to the living areas to give a legible uniform reading to the interior.