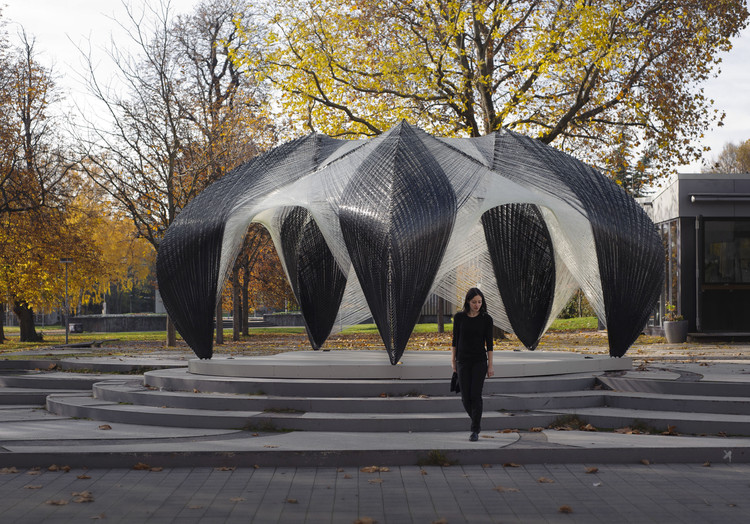 Text description provided by the architects. In November 2012 the Institute for Computational Design (ICD) and the Institute of Building Structures and Structural Design (ITKE) at the University of Stuttgart have completed a research pavilion that is entirely robotically fabricated from carbon and glass fibre composites. This interdisciplinary project, conducted by architectural and engineering researchers of both institutes together with students of the faculty and in collaboration with biologists of the University of Tübingen, investigates the possible interrelation between biomimetic design strategies and novel processes of robotic production. The research focused on the material and morphological principles of arthropods’ exoskeletons as a source of exploration for a new composite construction paradigm in architecture.

At the core of the project is the development of an innovative robotic fabrication process within the context of the building industry based on filament winding of carbon and glass fibres and the related computational design tools and simulation methods. A key aspect of the project was to transfer the fibrous morphology of the biological role model to fibre-reinforced composite materials, the anisotropy of which was integrated from the start into the computer-based design and simulation processes, thus leading to new tectonic possibilities in architecture. The integration of the form generation methods, the computational simulations and robotic manufacturing, specifically allowed the development of a high performance structure: the pavilion requires only a shell thickness of four millimetres of composite laminate while spanning eight metres.

Following a “bottom-up” approach, a wide range of different subtypes of invertebrates were initially investigated in regards to the material anisotropy and functional morphology of arthropods. The observed biological principles were analysed and abstracted in order to be subsequently transferred into viable design principles for architectural applications. The exoskeleton of the lobster (Homarus americanus) was analysed in greater detail for its local material differentiation, which finally served as the biological role model of the project.

The lobster’s exoskeleton (the cuticle) consists of a soft part, the endocuticle, and a relatively hard layer, the exocuticle. The cuticle is a secretion product in which chitin fibrils are embedded in a protein matrix. The specific differentiation of the position and orientation of the fibres and related material properties respond to specific local requirements. The chitin fibres are incorporated in the matrix by forming individual unidirectional layers. In the areas where a non-directional load transfer is required, such individual layers are laminated together in a spiral (helicoidal) arrangement. The resulting isotropic fibre structure allows a uniform load distribution in every direction. On the other hand, areas which are subject to directional stress distributions exhibit a unidirectional layer structure, displaying an anisotropic fibre assembly which is optimized for a directed load transfer. Due to this local material differentiation, the shell creates a highly adapted and efficient structure. The abstracted morphological principles of locally adapted fibre orientation constitute the basis for the computational form generation, material design and manufacturing process of the pavilion.

In collaboration with the biologists, the fibre orientation, fibre arrangement and associated layer thickness and stiffness gradients in the exoskeleton of the lobster were carefully investigated. The high efficiency and functional variation of the cuticle is due to a specific combination of exoskeletal form, fibre orientation and matrix. These principles were applied to the design of a robotically fabricated shell structure based on a fibre composite system in which the resin-saturated glass and carbon fibres were continuously laid by a robot, resulting in a compounded structure with custom fibre orientation.

In existing fibre placement techniques, e.g. in the aero-space industry or advanced sail production, the fibres are typically laid on a separately manufactured positive mold. Since the construction of a complete positive formwork is fairly unsuitable for the building industry, the project aimed to reduce the positive form to a minimum. As a consequence, the fibres were laid on a temporary lightweight, linear steel frame with defined anchor points between which the fibres were tensioned. From the straight segments of the prestressed fibres, surfaces emerge that result in the characteristic double curved shape of the pavilion. In this way the hyperbolic paraboloid surfaces resulting from the first sequence of glass fibre winding serve as an integral mould for the subsequent carbon and glass fibre layers with their specific structural purposes and load bearing properties. In other words, the pavilion itself establishes the positive formwork as part of the robotic fabrication sequence. Moreover, during the fabrication process it was possible to place the fibres so that their orientation is optimally aligned with the force flow in the skin of the pavilion. Fibre optic sensors, which continuously monitor the stress and strain variations, were also integrated in the structure. The project’s concurrent consideration of shell geometry, fibre arrangement and fabrication process leads to a novel synthesis of form, material, structure and performance.

Through this high level of integration the fundamental properties of biological structures were transferred:

- Heterogeneity: six different filament winding sequences control the variation of the fibre layering and the fibre orientation of the individual layers at each point of the shell. They are designed to minimize material consumption whilst maximizing the stiffness of the structure resulting in significant material efficiency and a very lightweight structure.
- Hierarchy: the glass fibres are mainly used as a spatial partitioning element and serve as the formwork for the following layers, whilst the stiffer carbon fibres contribute primarily to the load transfer and the global stiffness of the system.
- Function integration: in addition to the structural carbon fibres for the load transfer and the glass fibres for the spatial articulation, functional fibres for illumination and structural monitoring can be integrated in the system.

A prerequisite for the design, development and realization of the project was a closed, digital information chain linking the project’s model, finite element simulations, material testing and robot control. Form finding, material and structural design were directly integrated in the design process, whereby the complex interaction of form, material, structure and fabrication technology could be used as an integral aspect of the biomimetic design methodology. The direct coupling of geometry and finite element simulations into computational models allowed the generation and comparative analysis of numerous variations. In parallel, the mechanical properties of the fibre composites determined by material testing were included in the process of form generation and material optimization. The optimization of the fibre and layer arrangement through a gradient-based method, allowed the development of a highly efficient structure with minimal use of material.

The robotic fabrication of the research pavilion was performed on-site in a purpose-built, weatherproof manufacturing environment by a 6-axis robot coupled with an external seventh axis. Placed on a 2m high pedestal and reaching an overall working span and height of 4m, the robot placed the fibres on the temporary steel frame, which was actuated in a circular movement by the robotically controlled turntable. As part of the fabrication process the fibres were saturated with resin while running through a resin bath directly prior to the robotic placement. This specific setup made it possible to achieve a structure of approximately 8.0m in diameter and 3.5m height by continuously winding more than 60 kilometres of fibre rovings. The parametric definition of the winding motion paths in relation to the digital geometry model, the robotic motion planning including mathematical coupling with the external axis, as well as the generation of robot control code itself could be implemented in a custom-developed design and manufacturing integrated environment. After completion of the robotic filament winding process and the subsequent tempering of the fibre-resin composite, the temporary steel frame could be disassembled and removed. The remaining, extremely thin shell of just 4mm thickness constitutes an automatically fabricated, but locally differentiated structure.

The concurrent integration of the biomimetic principles of the lobster’s cuticle and the logics of the newly developed robotic carbon and glass fibre filament winding within the computational design process, enable a high level of structural performance and novel tectonic opportunities for architecture. Despite its considerable size and span, the semi-transparent skin of the pavilion weighs less than 320kg and reveals the system’s structural logic through the spatial arrangement of the carbon and glass fibres. The synthesis of novel modes of computational and material design, digital simulation and robotic fabrication allows both the exploration of a new repertoire of architectural possibilities and the development of extremely lightweight and materially efficient structures. 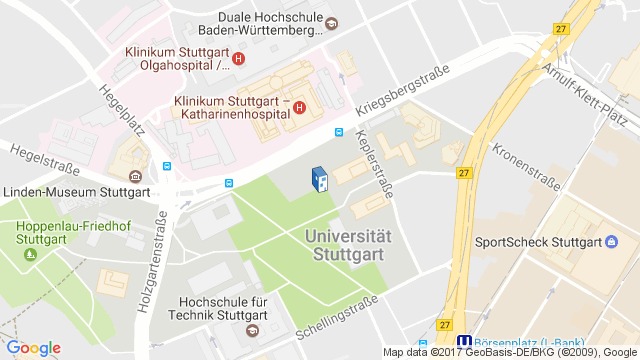 University of Stuttgart, Faculty of Architecture and Urban Planning
Office
•••