The Weaving In-Tension (WIT) Pavilion is a multi-functional temporary pavilion designed by Meta- Studio for the Operalab Competition. The modular project concentrates on customizable space with the aim of not only to create various purposes of space, but to reflect the theatre performing motion and spirit to the pavilion. Inspired by the dancing or performance motion captured in time, the project’s facade represents the abstract act and movement of the performance of the theatre. More images and architects’ description after the break.

The motion itself is created by series of mountain climbing ropes installation weaved together forming a facade. The illusion of the elegant abstract movement is a result of the way of weaving the ropes between top and bottom fixing then the intersection of the weaving will travel as you move.

The rounded shape of WIT pavilion provides a unique experience of a timeless journey and also, on the other side, it gives a certain transparency from direct visual angle and helps to reinforce the motion at other angle. Beside the ropes featuring as a facade from a distance, it also allows a certain level of transparency towards to the exhibition space as people walks closer to the pavilion. It leaves a curiosity behind the emotional movement.

Capturing motion in time is a dynamic language of abstract movement and pattern. This language is introduced on the geometry and also the facade system in order to give sense of fluidity, continuity and lightness. Like a dance, it is performed in many cultures as a form of emotional expression, social interaction, or exercise, in a spiritual or performance setting, and is sometimes used to express ideas or tell a story. It lies an emotion behind the movement which is re-interpreted by a method of weaving.

Weaving is a method of fabric production in which two distinct sets of yarns or threads are interlaced at right angles to form a fabric or cloth. A fabric is made to cover or protect your body and it has to be soft to the skin. Besides that, it needs certain porosity for air ventilation to your body. The blend of inter-relationship between the motion and the softness of weaving creates a emotional tension which creates a level of dynamic movement through a visual illusion. 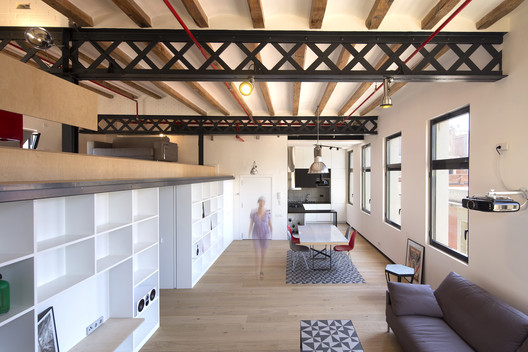