Save
Tower of Colony Installation / Groundwork
Share
Or
Copy

Exhibited at the ‘Next Play: Shifting Ground’ Exhibition in Taipei, the Tower of Colony is the Hong Kong project by Groundwork, which responds to a theme of ‘Displacement’, to transform a one acre site at Huashan, a cultural district at the heart of Taipei City. The architects were interested in how migrants react on a foreign land. By building on the site, they 'colonized’ one acre of grassland from site, therefore colonizing a fragment of Taipei. Hong Kong, a colony by nature, now has its own colony. Their abstraction of the act of colonization can be observed at two scales: The Tower and The Performance. More images and architects’ description after the break.

Directions are from a commentator from The Tower, visitors may use the chalk dispensers that are scattered over the site to demarcate territories with symbols. Participants are given a ‘task’ to ‘work’, their actions and marks will be recorded by a camera mounted on The Tower. Not only acting as headquarter to The Colony, also, the building symbolizes a totem of power and governances. The play, or performance, is the embodiment of four sets of paradoxes: 1/right (Taiwan ownership VS Hong Kong use), 2/space (transparency VS boundary), 3/man (spectator VS performer), 4/media (tangible VS translated). Hong Kong immigrants will be drawing concessions of land, Taiwanese audiences shall witness alienation of their home ground

Construction of the tower further facilitates our abstraction of colonialism. Skin of The Tower is prefabricated in Hong Kong and shipped to Taiwan. Towards the end of our ruling, the skin can be shipped back to Hong Kong or other parts of the world for other colonization conquests. The Tower may be replicated thus reinforcing Hong Kong's "sovereignty".

Ambience of The Tower was engineered so that it may possess two characters: the skin is introverted during daytime; its neutral color mimic and blend-in with the cloudy sky of Taipei; at night, the skin is illuminating and flamboyant. A projection screen will broadcast The Performance recorded during the day at a fixed time during the evening. The conglomeration of the people around The Tower will therefore be ritualistic and routined. 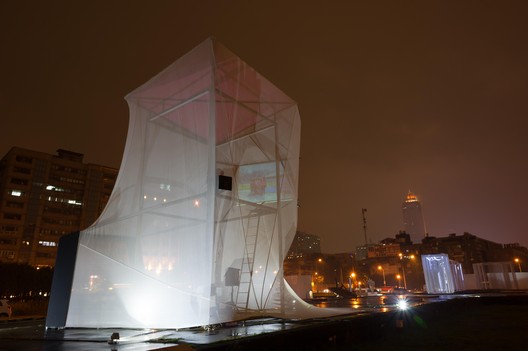