Designed by Andrea Vattovani Architecture, their ‘Back2rots’ research center proposal consists of a new working environment for young people. Upon developing the program to determine their target and who they wanted to reach, the architects decided to develop a big creative block in which young talented people could find everything. This project would be able to give them everything they need to be creative and to make their dreams a reality by having all the necessary tools. More images and architects’ description after the break.

We chose a group of single studios like ateliers with at least two sizes. In the studios one or more artist (designer architects painter or creative…) can rent one alone or with a group of colleagues depending on their needs and budget. In order to offer the studio users everything could be needed, we tough was necessary to add in our program work laboratory with machinery as laser cutter, 3d plotter and so on, also one auditorium for the presentations and different exhibition spaces for different needs, a place to meditate and one to relax in this case a coffee shop.

We felt we had to start from the site. First of all there is the silo and we wanted to support it and learn from it so we felt right away the silo would have strongly influenced the project. Than the Red Tory, a packaging company so that the logical consequences was to develop the whole concept as kind of monument to the historical function the site had, package so boxes. We also another important tough that another element was really important: the water basin that grew naturally trough raining water.

The following step was a logical consequences of our toughs. First we removed the water and as symbol of the old element we replaced it with glass. Under this glass we created a basement with all workshops and working spaces to have the optimal day light to work on machinery. Then we packed (properly packed) our room program in many boxes and develop a system of singular units around 100m2 and just “put” them in a chaotic way on the site. But we felt right away we had to order this complete chaos and we piled the boxes in 3 towers.

The silos came right away back in the game and as we knew from the beginning it would influence the project we understood we should symbolically extend the silo to the sky. So we re-order once again our boxes and made them practically twist around the silo creating 3 spiral towers. This twist allowed us to achieve also other two elements, first we could create terraces for every unit and the second could create a vertical promenade to the top of the towers like in shopping street.

We wanted also to claim exercise and movement in order to keep also the body fit in this community. That’s why we developed stairs and terraces in order to walk to the top of the building where every person could enjoy the view but also on the terraces admire “like in a shopping street” the windows of every atelier where everybody could present their work. In addition for heavy weights ad impaired users a spiral elevator derived from the factories systems was tough as solution.

We let the houses as they are. The two pavilion/houses that at the moment are completely abandoned are a kind of special memory for the site. Since China is changing so rapidly and a lot is being replaced we decided to re-use the two building in a special way. We decided to create meeting spaces, exhibition spaces and party spots especially for the good season leaving as much as possible as it is. SO we just had a parapet and less more only to keep it the same as before and have it as memory of the past.

The final design proposes 2843 m2 for the basement workshop space with adjacent storage room, toilets and cafeterias. This space together also with the 450 m2 auditorium is tough for big presentations and exhibitions where the creative minds could present their work by re-organizing the open space. Over that the silo, in which we decided to create a meditation garden to seek for inspiring moments.

The tower itself is made of the ateliers divided in 31 single unit with 100m2 and 17 double unit with 220m2. At the top of the tower on the 20th floor there is a permanent exhibition space for the ateliers but also for small presentations and conferences and a skybar with beautiful view over the city. On the roof top there is also a panoramic terrace which allow everybody to climb up and enjoy an open view on 360° of Guangzhou. 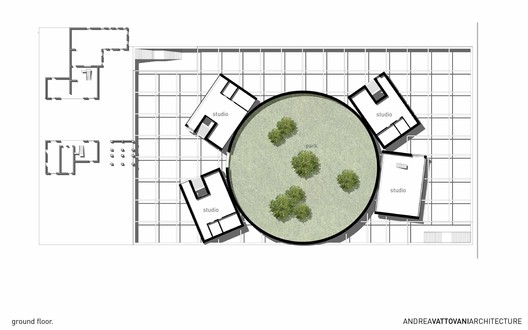