ETAT Architects + Spridd Architects recently won the first prize in an invited competition for a mixed-use building of housing and commercial space. Located in the centre of Norrköping, on the fringe of the historic 19th century textile industry area of Sweden, the exterior architecture interprets certain characteristic themes in the historic industrial area. These include elements such as large windows, local towers, repetitive and rationally organised fenestration, an emphasis on vertical elements in the façade, and exposed building material of stone. More images and architects’ description after the break.

The area is going through a typical gentrification process similar to that of other centrally located historic industrial areas in European cities. The buildings, originally used by the textile industry, are gradually transformed into office spaces, educational and cultural institutions and in some cases housing. The building site, at present an empty corner lot, is part of a triangular-shaped large heterogeneous city block. One of the demands of the brief was to establish a public square in this dense part of the city where three streets meet.

The program includes commercial space as well as two-story town-house flats on the ground floor and apartments of different typologies above on four floors. Access balconies connected to one single entrance hall creates the basis for a shared semi-public collective space around the small green courtyard. On the common roof terrace every apartment has its own individual planting-lot for growing vegetables, a solution connected to a growing interest for urban agriculture. Overlooking the city skyline, the inhabitants can use the collective space for various forms of recreation.

The building façade consists of pre-cast concrete elements with an undulating surface, lending the façade a textile character, and glass partitions in gold-anodized alumnium. 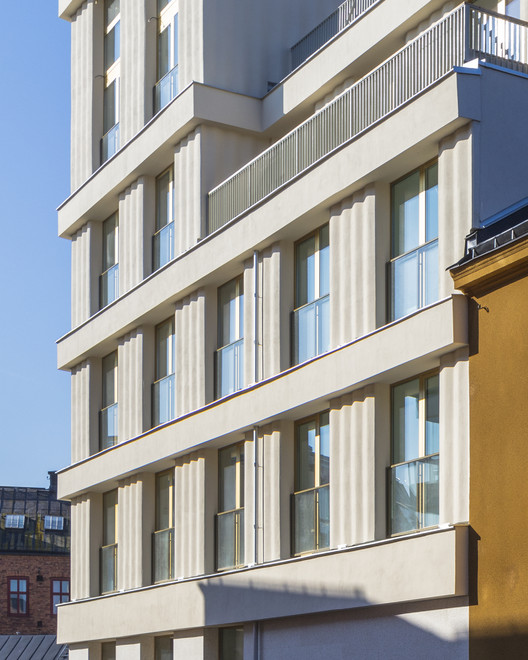 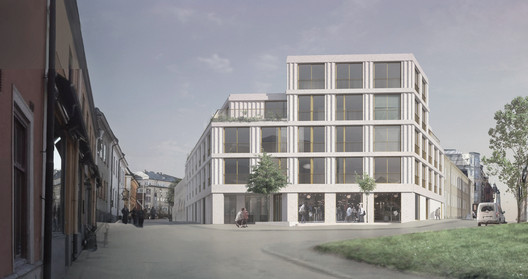