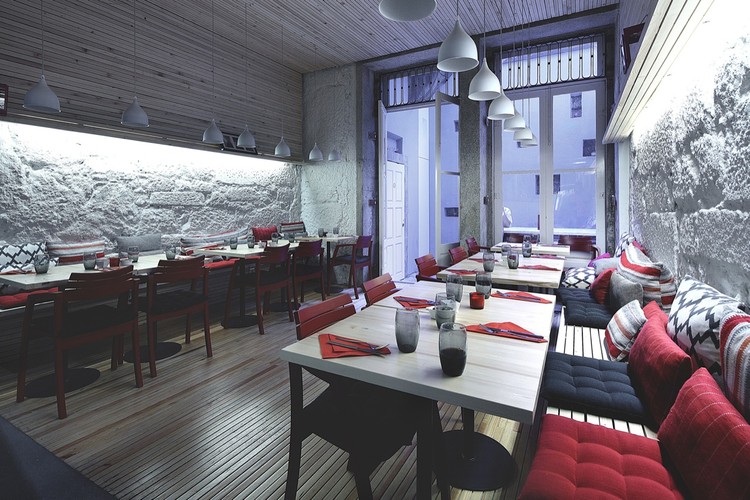 The building in question which was acquired in an advanced state of degradation, revealed, after a major "clean-up”, its potential for regeneration and some unique aspects: plaster work, carpentry, skylight...

The client required a functional refurbishment and overall modernisation, in line with the trend for "smart" revitalisation of the city centre, while being sensitive to the preservation of heritage.

The whole architectural structure was completely safeguarded and restored, and certain degraded elements were improved, such as the stairs, balustrades and exterior door and window frames executed according to the original design.

The name "Casa da Baixa" is indicative of the intention to restore the building as housing, combining a studio apartment and a 1-bedroom apartment intended for tourist accommodation, along with an office and the conversion of the run-down ground floor café into a welcoming restaurant integrated into, and connected to the same unit.

Out of "respect" for the architectural basis of the intervention, the design solution aimed to enhance the existing building in that it is representative of the housing and construction styles of 19th century Porto. Simultaneously, the new design tried to make its mark using elements notable for their contemporary language, that are carefully inserted so as to coexist harmoniously. With the introduction of these new elements, which in no way compromise the reading of the original spaces and also provide a certain spatial quality, the functions of the new brief are achieved for this living and refurbished building.