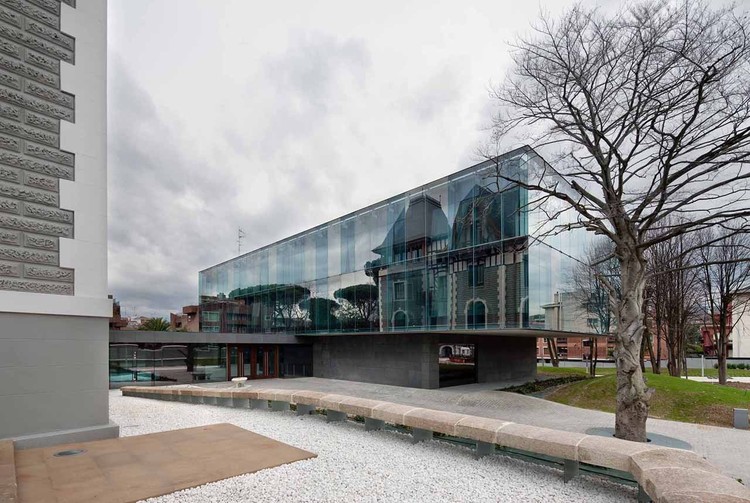 Bake Eder is situated on Zugazarte Avenue, Getxo. It is a parcel of 7.915m2 in which there were three buildings: Bake Eder house, in ruins, a little pavilion of ground floor next to the entrance (named “Caretaker’s house”) and an auxiliar building to the complex, all surrounded by important trees.In the year 2008, the complex was in disuse and in an obvious state of disrepair as a result of a fire it suffered in the 80’s.

The Provincial Council of Bizkaia, through its societies Lantik and Azpiegitura, promotes BiscayTIK Project, whose aim is the creation and maintenance of an integral informatic system designed to facilitate to the citizens of the Bizkaia territory the process of the different administrative bodies  premises and the provision of personalized email accounts for all citizens.

The winning proposal plans the restoration of both emblematic-historic existing buildings -the access pavilion and Bake Eder house, and the construction of a new building to complete the program needs. The proposal power the perception of Bake Eder building through a dialogue between the old and the new building, of different languages, and being conceived as isolated buildings in the landscape of the plot, and strengthening the landscaped character of the surrounding environment.

It creates a space between two buildings as an entrance plaza that connects both  buildings with a union piece between the two that works as a hall and internal conexion. This element between the two buildings is proposed as a body under glass to avoid altering the facades of the existing building. The plot is structured to maintain its access and its original internal routes. The new proposal involves building volume of Bake Eder respecting the current perception of the plot.

The restoration proposal respects the elements that characterize the statement made in 1910 by Mr. Manuel Mª Smith on the typlogical, stylistic and formal aspects of the building. With a total area of approximately 1.500m2, the building, a former residence familiar, is intended to accommodate the areas of leadership, coordination and training of the BiscayTIK project.

The foundation of the building is done by micropiling technical and tie beams perimeter, strengthen the continuous strengthening run existing foundation in the building. The micropilotis have 15m deep and work by friction with the ground (the rock strata is located 40m deep). Structurally the building is resolved using and recomposing the existing walls of brick, using mixed structure with steel beams and decking slabs. The roof of the building is executed by plywood.

The new building is conceived as a large glass-volume, a reflection of the environment, resting on a stone plinth on the ground floor. Its 2.500m2 are for common areas, conference room and modules for the development of the BiscayTIK project. Underneath there is a parking area of 1.500m2.

The foundation is made by floating piloting techniques 15m deep. The structure is made of concrete up to the first floor and steel structure on top. Note that on the first floor, the slab is made of lightweight concrete 60cm thick, that together with “Vierendel” beams make up the frames of higher floors and can achieve up to 6m overhangs.The interior looks for flexibility of use of the building with raised floors and suspended ceilings in almost all recordable spaces.

The facade of glass volume, is formed by glass-curtain inside and an outer layer that serves as “sun protection” for the building, with a set of three types of glass arranged in the orientation of each façade to optimize the energy performance of the building 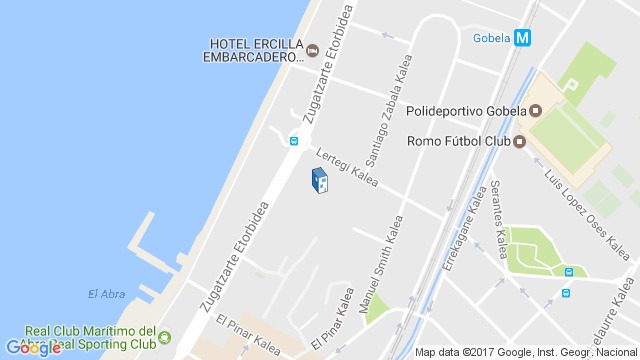