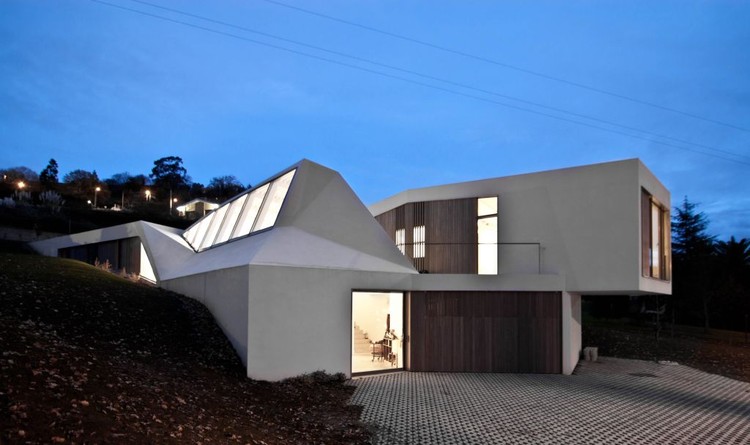 Text description provided by the architects. This project hybridizes two typologies: the modern house and the industrial shed with north light from above. The program specificity, with 4 autonomous but interrelated units - house, guest apartment, atelier and garage- together with the slope from the terrain design the frame where we integrated both types into a single volume.

This integration modified the regular use of some of the spaces of the original type based in the new relationship with its immediate surroundings. The house does not land on the ground but changes the relationship with it as the plan progresses. The volume emerges from it in one of the extremes, aligns the house with the garden in the central area and finally detaches itself in the west side. The open hallway that appears in the central area where the house and the atelier merge is designed as exterior and roofed space. It becomes the area of relationship of the different programs and works as a climatic regulator for them.

The energetic efficiency of the proposal and its landscape integration are two major considerations for the constructive solution of the project. The merging between the house and the atelier happens in such a way that every space has double orientation, lighting and ventilation.

The construction is based on a metal corrugated plate exposed in the interior, with a thermal layer of 10cm that covers all the volume and with an exterior finished of flexible stucco on fiber reinforced resins. The vertical walls are made of honeycomb clay block that reinforce the thermal insulation from the outside and increases the interior thermal lag. In the guest apartment the thermal blanket is substituted by a garden roof that establishes continuity between the garden and the building and provides a similar insulation. 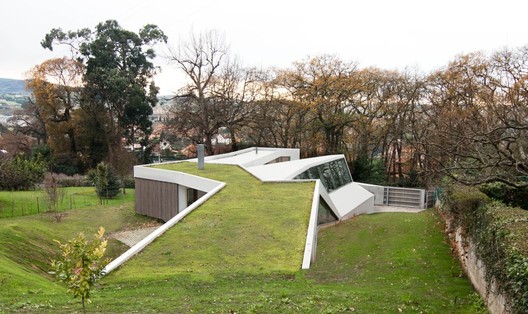