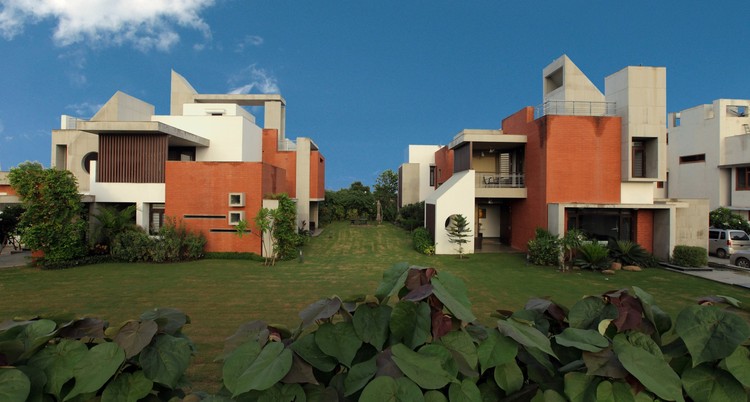 Text description provided by the architects. Two individual houses to be designed for 2 brothers and their families was the brief of this project. The plot (1000 smt) is situated in the R3 zone of the outskirts of the city of Ahmedabad (Western Part of India). A very clear instruction from the client was that they did not want to divide the plot and use it as a huge common space for both the families.

The distinctive quality of this project was that both the houses needed to look alike, as they are situated in the same plot. Thus the design language needed to remain the same, however the requirements differed.

The material play was done using exposed RCC and exposed brick work in both the houses. During the making of this house, the cost was a parameter. This challenged me to find alternate materials without compromising with my design.  An example for this is using the exposed RCC treatment on the plastered surface to get a better quality of work in lower prices. Moreover the formed masses gave the houses many variations in each facade. It is almost as if the house looks different from every angle.

Cross ventilation was an important factor considered while designing both the houses. I wanted to prevent the direct sun rays coming in from the south and west facade, however, I didn’t want to stop the breeze coming in the house, thus using the aluminum fins as sun breakers worked as the best solution.

One feels the same exterior architectural language after walking in the houses too. The interior facades are a blend of white, exposed RCC and exposed brick work. An exposed RCC wall mural enhances the space and its dominancy. These murals, in both the houses, were designed and casted on site. I chose Kotah stone as flooring in the houses as it complements the language of architecture and also demarks the spaces boldly.

The courtyard and pooja (prayer) rooms work as buffer spaces in each house, separating the personal and common spaces such as the living and dining rooms. Double height spaces are given in both the houses to make the common spaces look grand. These double heights also help to keep the visual connection between both the floors intact.

The concept of having a beautifully developed garden being seen from the insides of a house remains the same in every project I design. I believe my clients should be able to enjoy the garden and landscape even when they are seated in the house. Thus providing small courtyards and giving full height windows are always incorporated in my projects. An excellent example for this is the courtyard given on the western side of Rujul’s house. A high wall was designed to provide Cascade fall in order to create a wind tunnel. The wind gets cooler whilst passing through this courtyard and then enters the dining room through the living room, thus cooling the entire house. 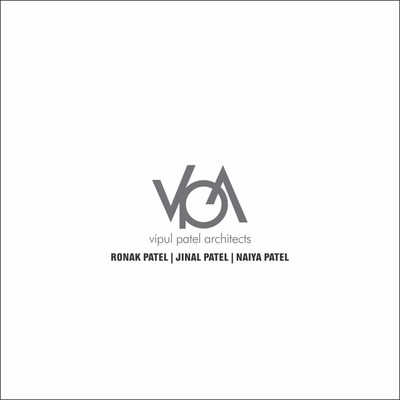