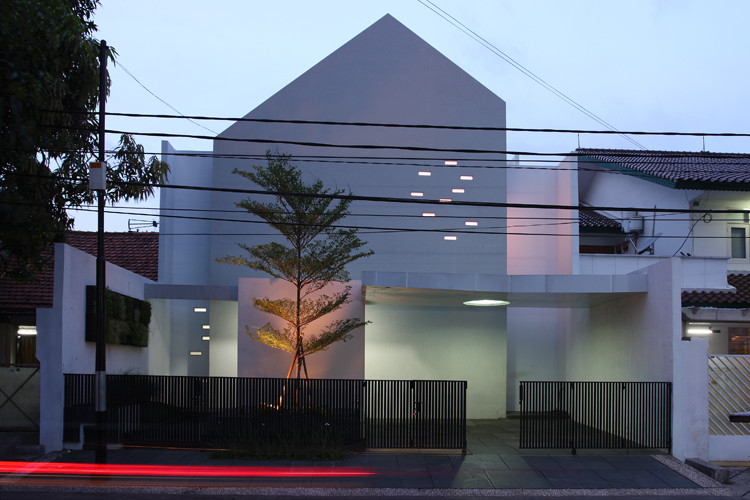 Text description provided by the architects. Strategically located in Kebayoran Baru, this family home sit on a 260 sqm land next to a busy connecting street that sometimes jam pack during the office peak hour. Albeit its proximity to the Jakarta Central Bussines District, the site is clearly not an ideal choice for a household with 3 grown up children.

The need of an ample space for children playground and activity spaces are the main challenge that has to be adressed in the design of this abode. The house itself –as requested by client - doesn't have to scream “identity”. Fronting it is a distinctly muted angular prism facade painted in a textured warm grey surface, set back 5 meter away from the main road. Peppered with random tiny square glass box in one side, the facade is as austere as the all starck white internal wall surface.

What lacking on the front yard (as a playground) is substituted in the inside. To create a space that can be used as an indoor playground, architect split the house into 2 main blocks. The gap of 4.5 meter between these 2 blocks resulting in a lofty voids of 12 meter in heights, above the 3 meter width ‘bridge’ connecting the 2 separate blocks. This bridge, overlooking the dining room below, is an airy and bright space (thanks to the skylight above) that connects the pantry to the children’s room which seen itself as a floating playground. The high ceiling itself prove very useful to generate air movement, eliminating unecessary use of Air Condition system. With an internal window open from all bedrooms to the central lofty voids, the principal of borrowing space is fully utilized here, to create a visually larger bedrooms for the family. During the day, children will fill this internal space with activities and laughter, while at night the lofty ceiling helps to regulate fresh air, reducing Jakarta’s warm and balmy weather.

The tapered site filled with rectangular form of the house, resulting in a residual space in front of an open family room. This space is rather wide nearing the end of the site, enough to fit in a 2 meter width plunge pool for the children. This 1 meter depth pool with blue mosaic internal wall and overflow water toward its 12 mm tempered glass wall perimeter, creates a shooting ambient for the rooms next to it.

The rear block, 1 storey higher than the front block, containing a full 2 storey master bedroom. The window of this master bedroom overlook the small alley behind the site with a view of Central Business District as it main attraction. The chamfered edge at the peak of its slopping ceiling eliminating edges on its surface, creating a visually larger and brighter space.