Text description provided by the architects. The Gold Line Bridge is a 584-linear-foot bridge stretching diagonally across the Eastbound I-210 Freeway in Arcadia, California. The $18.6 million dual track bridge is the first element of the 11.5-mile Metro Gold Line Foothill Extension (Foothill Extension) light rail project from Pasadena to Azusa to be completed, providing connection between the existing Sierra Madre Villa Station in the city of Pasadena and the future Arcadia Station.

The Construction Authority hired Mr. Leicester as the Design Concept Advisor before the contractor and architect, re-imagining the design process for infrastructure projects. This ground-breaking collaboration resulted in the creation of a sculptural bridge, which could be built for the same cost as was originally estimated for a typical structure of its make-up.

Skanska USA Civil (Skanska), one of the largest general contractors and construction managers in the country, is building the bridge. The company hired Los Angeles-based AECOM, to be the project’s architectural and engineering lead, and turn the Construction Authority’s vision into a constructible reality.

Design Concept
The design concept was developed by award-winning public artist, Andrew Leicester who has completed several large scale public art works throughout the United States. His bridge design was inspired by the local indigenous peoples and wildlife, as well as the roadside attractions of Route 66 with its oversized architectural landmarks. These inspirations permeate all elements of the structure. Most notable are the two 25-foot tall, 17-foot diameter sculptural baskets flanking the sides of the main superstructure, tied together visually by the relief-pattern on the outrigger beam. The superstructure’s serpentine main underbelly of the bridge contains casted grooves and hatch marks which simulate the patterns found on the Western Diamondback snake and metaphorically reference the connectivity of the transit system.

Facts/Details
The complex patterns of weaving on the outrigger beam and ribbed pattern on the superstructure were created using hand-crafted wood formwork with rubber formliners. The formwork acted as a mold into which concrete was poured. Once removed, the intricate patterns on the surface of the structures were revealed.

Each woven basket is comprised of 60 individually pre-cast segments. Each basket also has 16 reeds at the top which range from two to ten feet in height. All pre-cast custom pieces were fabricated by Moonlight Molds in Gardena, California. The weave sections are six feet long and weigh 900 pounds each. The pre-cast segments for the basket are made of a unique aggregate mix developed specifically for the Gold Line Bridge. The concrete blend contains black stone, as well as clear, grey and mirrored glass to provide a subtle reflective quality to the material which responds to the atmospheric conditions of the site.

Engineering
AECOM, an innovator in design consulting services, led the project’s design and engineering. The Los Angeles-based firm was responsible for taking the conceptual design developed by Mr. Leicester and the Construction Authority, and addressing the many challenging constructability issues of the bridge. Adding to the challenge of the unique artistic design was the need to create a long span crossing an active seismic fault. To address these issues, AECOM designed a three-span, cast-in-place post-tensioned box girder supported by a single column bent and one outrigger bent spanning the freeway. Due to large vertical and lateral demands of the structure, AECOM designed three, large-diameter cast-in-drilled-hole (CIDH) foundations - each 110 feet deep and 11 feet in diameter. 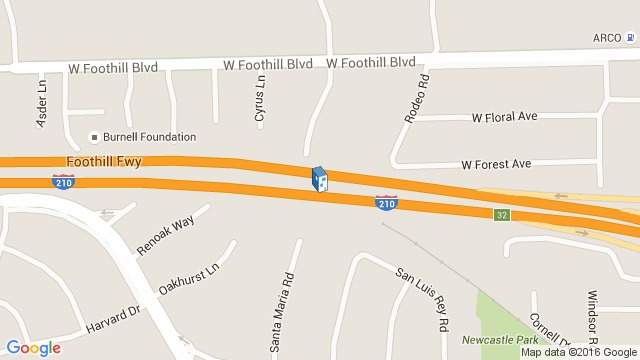 Location to be used only as a reference. It could indicate city/country but not exact address.
Share
Or
Copy
About this office
Rivka Night
Office
•••
Andrew Leicester
Office
••• 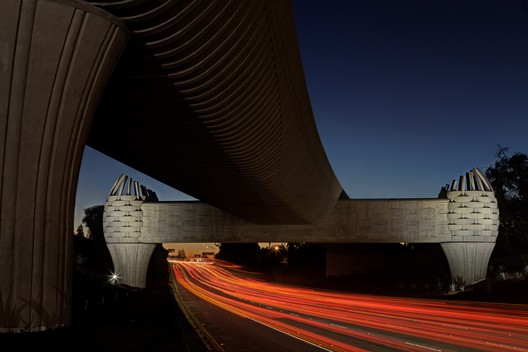