Iconic for its floating steel roof and brightly colored panels, the Pavillon Le Corbusier is the last building Le Corbusier designed before his death in 1965. Completed in 1967, the building stands as a testament to Corbusier’s renaissance genius as an architect, painter, and sculptor. It does so both intentionally, as it is an exhibition space for his life’s work, and naturally, as it is a building masterfully designed. Interestingly, the building diverges in some ways from the style responsible for his renown – concrete, stone, uniform repetition, etc. It celebrates the use of steel, with which he explored prefabrication and assembly, and a freedom through modularity, in which the plan is completely open but infinitely adaptable. 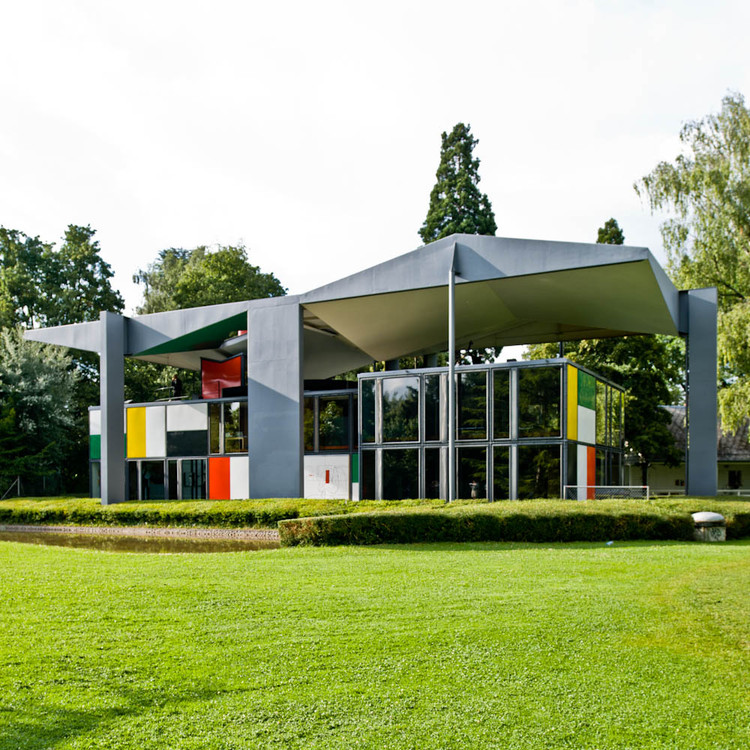 Heidi Weber, a successful interior designer and so called ‘great patron’ of Corbusier, commissioned the building in 1960 to be both a small home for herself, and a building to house Le Corbusier’s artwork, which she had already spent years patronizing (most notably, his chaise longue). The project, then, was to be a ‘complete work of art,’ or a ‘Gesamtkunstwerk’ as it were, where Corbusier would design a building for the sake of his own art. This was a fitting task for Corbusier as, according to Sigfried Giedion, “It is essentially the synthesis of the arts that was expressed so strongly in everything he created.”

The building is composed of two major volumetric elements: a floating parasol roof-structure and beneath it, a two-story rectilinear volume sitting on a concrete pavilion floor. Modular steel frame cubes with a standard dimension of 226cmx226cmx226cm (about 7.5 cubic feet) make up the structural framework of the base volume. Two sets of these cubes are stacked on top of one another to achieve the two-story height of the building. All necessary elements, including walls, windows, doors, etc., are bolted into these frames. The nature of these prefabricated cubes make for a completely open ground plan that can be divided at will, a convenience well attuned for a hybrid exhibition/dwelling space. In this way, “Le Corbusier used standardized parts to create individual forms instead of uniform repetitions,” a technique Jorn Ützon famously explored.

The roof structure, which stands on four rectangular supports, consists of two 12mx12m square elements made of welded steel sheets. Each square is in the shape of a parasol, one facing up and the other down. The entire structure is prefabricated: produced by the steel manufacture, brought to the site in the biggest possible pieces, assembled to its final state on the ground, and finally lifted into place. The two parasols provided cover from sun and rain during construction and continue to provide cover for the entire pavilion, while also acting as a dominant aesthetic element of the building.

Enamel panels in primary colors and glass envelope the main volume of the building. In the language of the rest of the building, the panels are of a standard dimension, one-third the size of the steel cubes. The panels and their respective colors are distributed throughout the building’s exterior with a perceptible rhythm.

Despite what seems to be a major focus towards the building itself, the pavilion does not neglect its site. Pivoting doors and windows that open to the outside help to blur the boundary between outside and inside; and a roof garden beneath the parasol structure allows for appreciation of its beautiful site, which includes a small pond adjacent to the pavilion.

It is important to note that the first design for the project, which he delivered to Weber in 1961, called for an entirely concrete building. It wasn’t until 1962 that Corbusier changed the design to be predominantly in steel. In its final form, however, he did choose to use some concrete, but only for the vertical circulation. This consists of only two structures: the interior staircase in the two-story studio space, and the exterior ramp, both of which go from the ground to the roof garden.

Update: following a request from the Department of the Mayor (City of Zürich), we have changed the name of the Centre Le Corbusier to the Pavillon Le Corbusier in the article text.