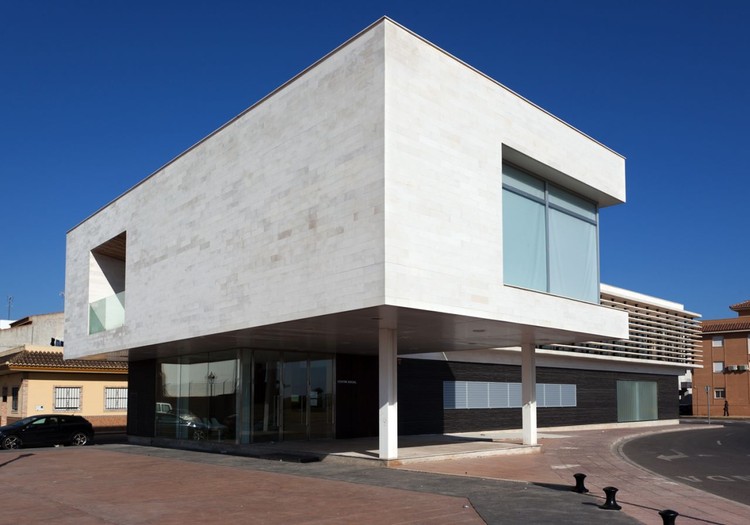 Text description provided by the architects. The Social Center and Magistrate’s Court of Rafelbunyol is a facility located in the South area of the village, in a new growth settlement. The public plot appears in the urban design as an interstitial space (almost a leftover) among the roundabout connecting with the consolidated area and the existing buildings. As a result, the geometry is very irregular with a curved boundary that hinders the disposition of clean volumes.

Additionally, the plot dimensions are quite reduced so the occupation is necessarily very high to achieve the programmatic requirements.

This facts, instead of setting limits, turn into the generators of the volumetric display of the building. In the ground floor, it decouples the boundaries to conform a rectangular slab and in the upper floor it has cantilevers arriving to the perimeter of the plot. Therefore, the canopies trough which you access the building, get enough size to become transition spaces, outside but sheltered and elevated upon a plinth that acts as a nexus with the horizontal plane of the ground along the basement.

In the same line, this duality appearing in the different perimeters of the two floors reflects in their materials. The ground floor is built in black brickwork, massy with windows as perforations on the enclosure, in contrast with the first floor coated in white Capri limestone, visually lightweight where windows extend their proportion to become glass panes.

These transparent panes also have different treatments depending on their orientation. In the South façade they are protected with precast white concrete slabs and in the North façade they become U-glass translucent enclosures responding to the sunlight and interior distribution which is displayed in stripes.

On the inside the building is structured with a central circulation to access on the one hand to the main rooms, all of them South-facing, and on the other hand to staircases, service and installations rooms, North-facing. 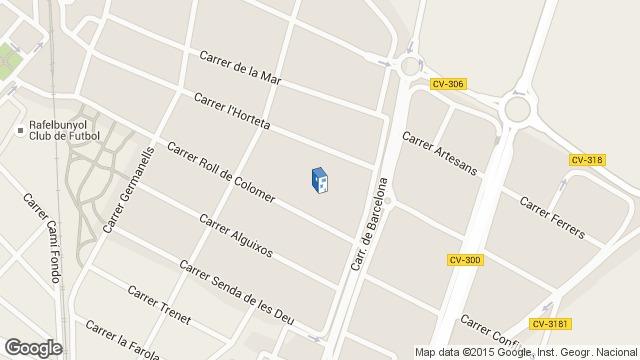 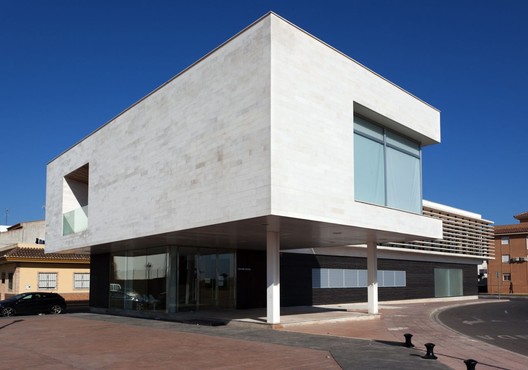