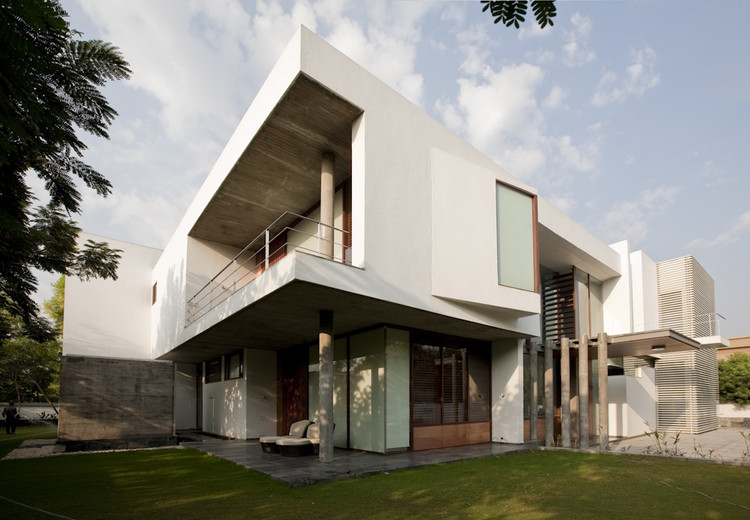 We were approached for this house by clients who knew exactly where they wanted which rooms, as ‘vaastu/feng shui’ dictated…they were looking for an architect who would string these spaces together as they desired. This was part of a gated development where every villa developed by the builder was similar and had colonial references, but on the client’s special request to bring in their own architect, the builder relented, on condition that the house be a simple white straight lined structure on the outside.

The house has at its heart a double height informal space that the client was keen to use as a lounge that allowed direct visual access to all areas of the house. The rooms are loosely tied around this central core. As a result of the rooms surrounding this central space, getting natural light was a challenge and this was achieved by creating a series of little skylights and clerestory openings that suffuse the central space with light. A double height screen in slatted wood, suspended from the ceiling and ending short of the floor, separates the entrance lobby from the lounge, and screens off movement on the first floor bridge that leads to the bedrooms.

The house is built on a corner plot and nestles within a verdant green zone, offering enough privacy to the owners .Its planned in a way that all public spaces are on the ground level and the private ones on the upper level. A master suite, a guest bedroom, and a cluster of two kid’s bedrooms joined by a central play area define the upper floor. The lower floor houses the living and dinning rooms, the kitchen, and a bedroom suite, in addition to the central lounge.

Owing to the developers request to keep the house simple on the outside, it was conceived as an upper white box housing the bedrooms, floating over a transparent glass base (containing the public areas). Large cantilevers suspend most parts of the upper floor over the glass box below creating a sense of levity and weightlessness. Glass enclosures along all the periphery walls on the lower floor ensure a blurring of the boundaries between indoors and outdoors and allow for the decks surrounding the house to be used while entertaining.

The clients request for a pool that could be cordoned off as an indoor space (to provide privacy from the staff in the house) was respected by locating it just below the overhang of the daughter’s suite above. A series of slender concrete columns separate it from the living space, while a double height shaft rising above the pool draws light from the skylight above, and makes a visual connect with the daughter’s bedroom above. Openable sliding glazing all around the pool decking allow for it to be fully opened up when desired.

The underside of all cantilevered slabs was left exposed in concrete, and the finishes for the interiors were selected with the intent of creating a tension between materials, to juxtapose the rough with the smooth- the exposed concrete ceiling, timber and copper against the smooth surfaces of grey William marble, terrazzo and silks. 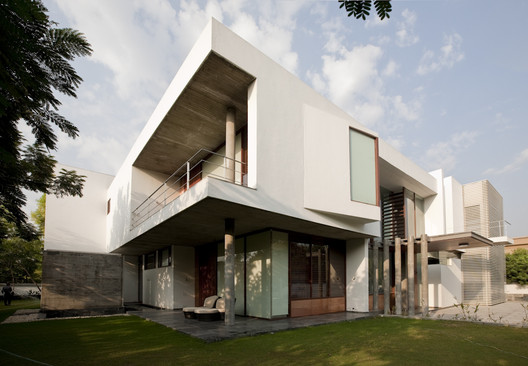