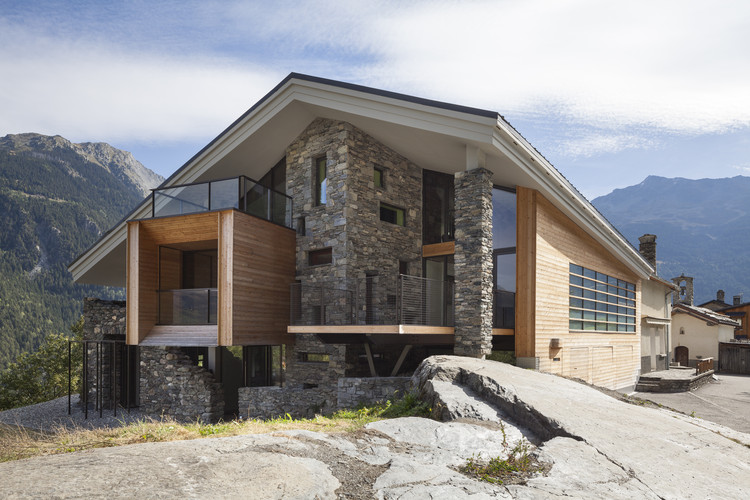 Text description provided by the architects. Mountain ranges often appear to be sublime. Under a mantle of snow their enormity would seem to defy the possibility of architecture. Time does not pass. Eternity stands opposed to the fragility of human accomplishments. And yet contemporary architecture has a place in an ancient hamlet. A fact amply demonstrated by the recently constructed Mineral Lodge at an altitude of 1200 metres in Savoie.

As the site offers exceptional views of the surrounding mountains and valleys, the project makes use, perhaps emphasizes, this stunning and dramatic natural landscape. In such an impressive environment building must take place with a light hand. In this natural and majestic scene, building becomes an act which must be in dialogue with the immemoriality of the rocks’ own historical movements. The rocks fix time. Building therefore is the moment at which human time encounters geological time. The Mineral Lodge is a refuge of stones and rocks. As such it stands at a distance from the norms governing the tradition of recently constructed chalets. The latter are marked by an attempt to portray luxury. The hamlet of Villaroger has strict construction rules. The project which began with both the ruin of a farm – all that remained were the outside walls – and an adjacent pre-existing chalet offered the chance to construct a dialogue between a vernacular architectural presence and the contemporary desire for a sustainable architecture informed by the most recent technological developments.

This dialogue guided the construction. A physical link was created with the pre-existing chalet by providing a nine metre vertical opening between the buildings. In the new chalet the stonewall of the old chalet was left as it was. Careful reinterpretation of vernacular architecture accompanied the project. What matters therefore is the emergence of another chalet from a pre-existing ruin. This is an important undertaking because the Mineral Lodge establishes architecture in a place where previously there had not be architecture but mere building. The Lodge departed from a historical perspective and was inscribed in vision of the future. The stone house was not rebuilt. The project imagined possibilities for ruptures and transitions such as the square wooden box that is projected outside the glass wrap of the curtain-wall. This element acts as a reference to local overhang attics and addresses the typology of vernacular architecture.

A number of views on the landscape are provided:  the ruins facing North are punctuated by an "observatory balcony" with a panoramic view. The second floor level delivers a variety of vistas. The roof takes an important role in the project. Instead of constructing another traditional wooden roof, a reinforced concrete roof serves as an envelop and allows for a more flexible use of space. Hight limitations imposed by regulations gave the opportunity to work on a variety of levels connected by different staircases. The interior space is thought as a series of sequences providing areas based on fluid and open circulations. The kitchen situated on the ground floor is covered by a large skylight.

The use of stone as surface cladding is visible throughout the project. The horizontal and vertical openings of the staircase volume could only have been constructed with concrete walls. From outside the openings which correspond to program are not immediately legible. Heightening thereby the effect of the surface. The idea of a visible relationship between the interior and exterior is abolished. At the same time, this strategy reflects the older chalets of the village in which the openings do not indicate what kind of space lies behind: bedroom, kitchen, living room... The Mineral Lodge's wooden box has a singular contact to the stonewall. Each stone registers its relationship with each wooded panel. The latter adapting to accommodate the irregularity of the stones. Through this interaction fundamentally different materials achieve a subtle connection.

Earthquake constraints and avalanche protection are integrated into the structural design. Mineral Lodge in terms of sustainability and energy consumption achieves the highest standards due to geothermal heating.  A heat pump circulates water in three 150m deep drills in the rock where temperature is stable year round, and the presence of underfloor heating and double-flux ventilation means that the entire heating and cooling system is invisible. 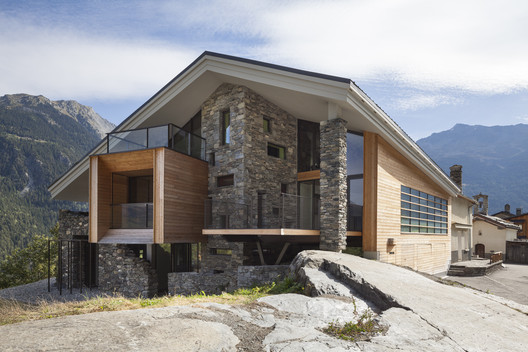