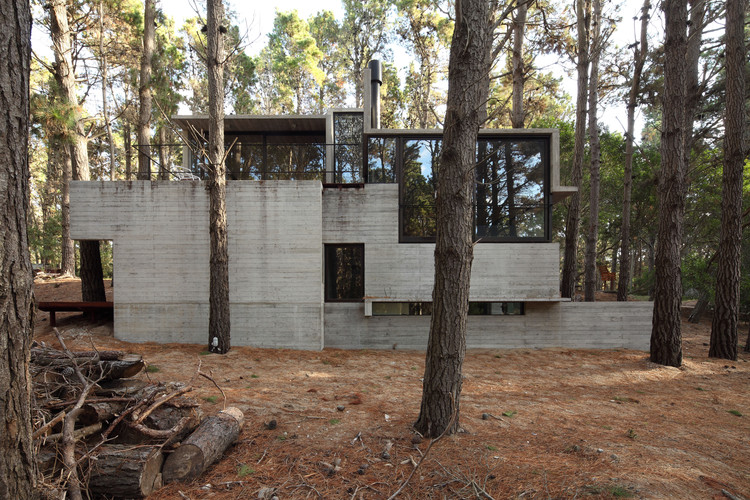 The location
The ground on which we should intervene, forested with maritime pines of great size, has a slope of about 3 m in its front. In connection with the street, one end thereof is elevated while the opposite has a depression that some large acacias hide the view from the street.

The assignment
The order of the client was a house of exposed concrete, to be used much of the year, for a blended family. It was important the social areas to be of a large size, and the master bedroom could function as a sector of great independence and be equipped as not to depend of the rest of the house. It was expressly required the house to have multiple places of saved because the idea is to live there for the three summer months continuously.

The proposal
The particular highlight of the lot, its relationship to the street and the requirement of a large program solved in sectors with some independence, are the issues that make this house a singular one, with a constructive proposal aesthetic, similar to the others built by the studio in Mar Azul.

Housing was designed resolved into four sectors connected to means levels on a single ladder. This decision allowed us to reduce the circulation areas to a minimum and go accommodating the various uses, following the natural slope of the lot and even burying part of them, reducing in this way, part of the built. The ladder of course becomes the organizer, not only functional but spatial, as a nexus between spaces that need to be integrated. With this volumetric arrangement and taking care to maintain as much vegetation, we were able to provide the house of the variety and flexibility of required spaces, without losing their independent use between them and proposing to them all, a clear integration with the landscape through openings that frame it. 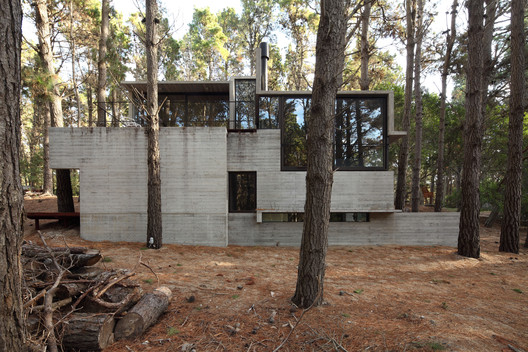