Save
Architecture for the Apocalypse (Now)
Share
Or
Copy

In 1945, the United States dropped 2 nuclear bombs on Hiroshima and Nagasaki. While the act devastated and destroyed these two Japanese towns, it also created an entirely new political climate, one based on apocalyptic fears. As tensions with Soviet Russia heightened, and the United States entered an age of potential nuclear destruction, the landscape itself adapted in response - becoming littered with bunkers and fallout shelters, the “concrete responses to the political social and existential anxieties of the atomic age.”

Fast-forward nearly seventy years, and we’re currently faced with a new apocalyptic scenario of our own. Assuming you’re reading this, we have all survived the Mayan Apocalypse. Congratulations. However, that’s not to say that out apocalyptic fears - and its resultant architecture - has come and gone. Our apocalypse is more based on the fear of natural disaster - hurricane, tornado, viral disease, even infected-zombie-people - than nuclear attack; and our apocalyptic architecture is less of the bunker variety, and more of the vertical farm/fortress - let’s call it ESD: Extremely Sustainable Design.

More on apocalyptic architecture of the 21st century, after the break... 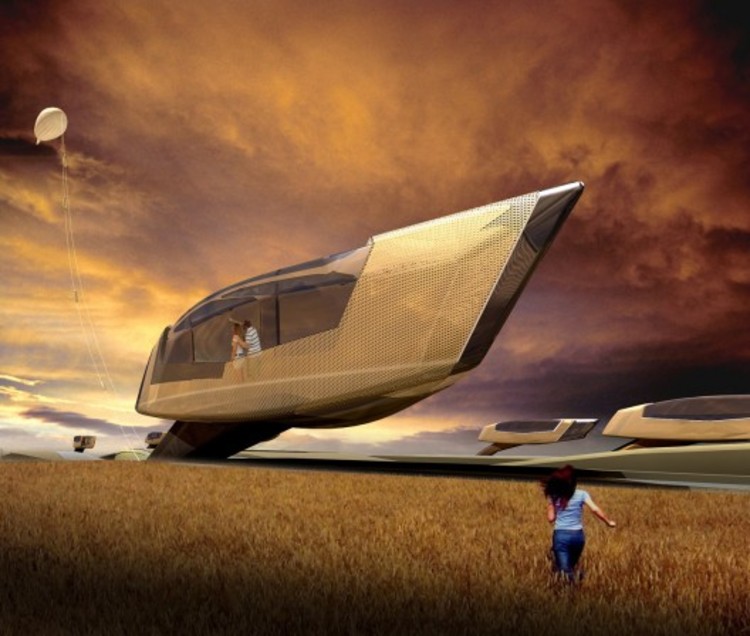 Whereas bunkers of the 1950s were meant to protect from nuclear attack from above (in fact using green roofs as camouflage), today’s apocalyptic structures are far more likely to have a green roof for food-production purposes. When natural disaster strikes - be it flood, drought, or earthquake - it will be the scarcity of resources (rather than the disaster itself) which will prove most perilous. Indeed, one of few most recent bunkers to be constructed is not a bunker for people at all, but rather one for plant seeds - the first victims of climate change.

And while a fortress may seem like the best answer (see the design for a tsunami-proof citadel, a “defensive shield [...] from the destructive forces of nature,” above) most architects would recognize that no man-made structure will survive the wrath of mother nature for ever. After all, those very bunkers built in the 50s to withstand nuclear attack, have already begun showing signs of decay. And, as any viewer of The History Channel’s Life After People knows, in one way or another, even the greatest buildings will always, eventually, fall.

So is there an architecture that could survive the 21st century apocalypse? Just take a look at some of the necessary characteristics suggested in this post on Survivalist Architecture, via Coffee With An Architect:

The post-apocalyptic descriptions aside, a quick look at this list reads more like a checklist for LEED certification than apocalypse survival. Which is, exactly the point.

As Matt Jordan, one of the architects behind “Look Out House,” the third-prize winner in Architects Southwest Zombie Safe House competition (designing houses for the Zombie apocalypse), told The Economist: “it needs to be simple and sustainable, capable of generating its own energy, food and water, and of managing its waste [...] This takes the ideas of 'off the grid' and 'sustainability' to great lengths, helping to push the boundaries and envision how we might live if our modern conveniences were stripped from us.” Extremely Sustainable Design (ESD).

And in the end (literally), ESD comes down to designing buildings that works with nature, rather than against her.

Ted Givens, of 10 Design in Hong Kong, is taking this premise to heart in his own research, trying to find ways to apply kinetic design to architecture in a way that would allow us to adapt to climatically unsafe environments. In his renderings for his Tornado-Proof suburb, Givens describes his approach: “Rather than trying to dominate and transform the landscape, throwing off the natural ecological homeostasis of an ecosystem, this design offers a solution that works within the parameters of the environment, learning from it and responding to it passively.”

Indeed, seen this way, apocalyptic architecture is really no different from utopian architecture. As John McMorrough writes in “Design for the Apocalypse:”

In a world of overwhelming complexity—of zero-sum economics and peak-oil—the apocalypse comes not as problem, but as answer. The 'end of' also implied a 'beginning of'—a chance to re-start and re-think. [...] To shift from the utopian to the apocalyptic is not merely to set the terms in an opposing relation, but to understand their similarity.

While ESD may signify the end, it’s also a reminder of the beginning - one that the prevalence of green and sustainable design proves that we’ve already begun to experience. The Apocalypse is now. And it ain’t so bad.