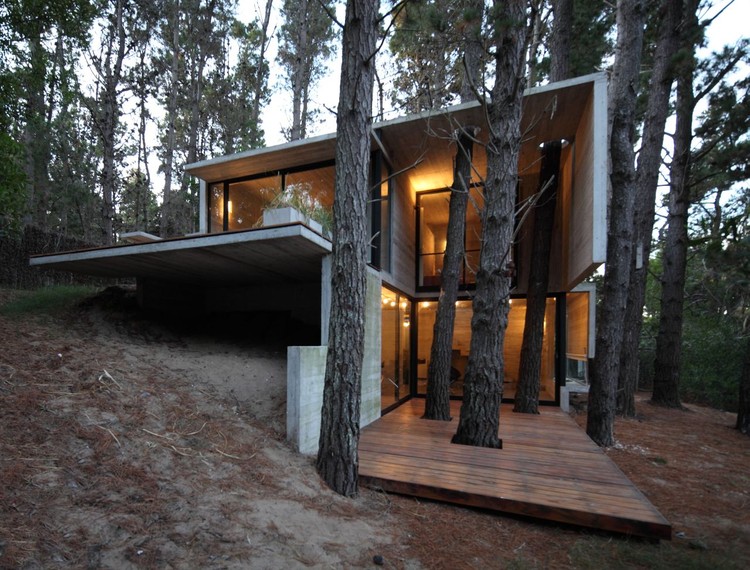 Text description provided by the architects. The ground on which we should intervene is close to the corner, is of small size and the most relevant data presented is a slope of almost three meters from one end to another of a front of only 15 meters. The lot itself is well forested with maritime pine trees of great size, but then the forest is thinned out abruptly. Try to preserve the specimens of the terrain was one of the conditions of the search for solutions.

The request of the clients, a couple with grown children, was a small house of concrete of about 80m ² (such as they had seen in the place) to be used mainly in summer, with only two bedrooms of minimum dimensions and a bathroom, so as to allocate the largest surface to the social area, because they wanted to use it together with friends or with their sons.

The steep slope of the lot, the privacy that it generates regarding the street in most of the front and the need to use the limited space required reducing as much as possible the circulation areas of the given program, are the issues that make this house unique with a constructive aesthetic proposal similar to others built by the studio in Mar Azul. In response to these factors we decided that the best thing was to propose a very compact house solved in two floors, which occupy the smaller ground surface in order to safeguard the largest number of trees, while noting that this resolution on two levels in this steep slope ground enabled us to put in contact with the ground almost every room in the house. Thus we solved the program within a square floor plan prism leaned against the slope, which has been emptied in a quarter of its volume creating a partially covered outdoor space with double height crossed by two pine trees of great size. This space, for its scale and location in relation to different areas of the house, becomes the main protagonist of this proposal.

The access to the house is defined by the partially covered double height area. From here and through two large windows, you can access the zone developed as a single social area with an integrated kitchen, a small toilet and a stairway leading to the sleeping area. The entrance floor has its larger sides almost completely buried, so it was necessary to bring in the light from the upper floor through an overhead opening on one side and through a high window in the stairwell on the other. Accessing the second floor via the staircase is an opportunity to feel the presence of the landscape, as one of its sides, fully glazed, allows the sensation of being incorporated into it. Once upstairs, through a small hallway can be accessed to a bathroom with a large window, the guest bedroom overlooking the partially covered and the main bedroom with an expansion to the highest part of the ground through a deck. This expansion terrace, very high regarding the street, enjoys the scenery spectacular views as well as privacy.

The house is constructed of three basic materials: exposed concrete, glass and wood in the outdoor decks. The slabs of the different volumes are supported by walls and exposed concrete reversed beams, and are finished with a minimum slope in order to produce a faster rainwater runoff. It was used the same concrete of the other works in Mar Azul (H21 with fluidizer) a mixture with low amount of water that when forge create a more compact concrete. The floors are of concrete screed cloths divided by plates of aluminum. The openings are of dark bronze anodized aluminum. The heating system, since there is no natural gas in the area, is solved by combining salamander, bottled gas stoves and electric stoves.

Except the beds, couches and chairs, the rest of the equipment of this house is solved in concrete.