Save
Vodafone / be baumschlager eberle 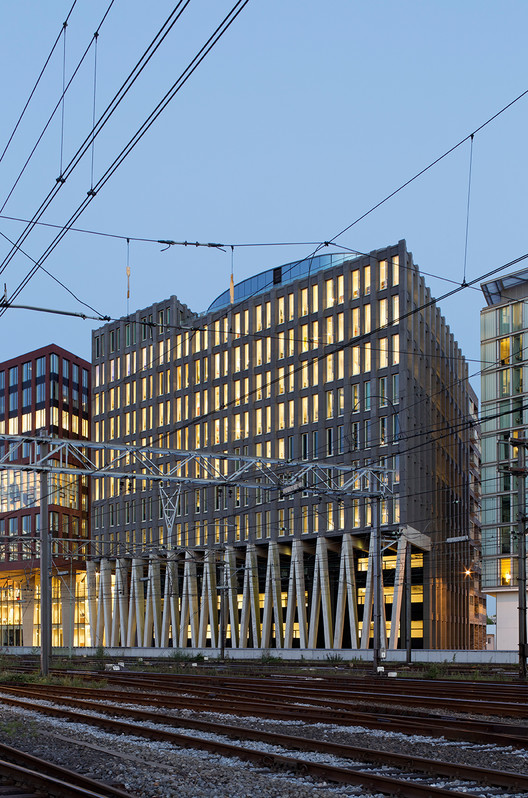 Text description provided by the architects. Everything began with the arcade. The master plan specified that all the new buildings in the Oosterdokseiland development area near Amsterdam Central Station were to include such a semi-public zone. This naturally involves a loss of floor space but, if you ignore that, the requirement certainly makes sense. An element of this kind gives cohesion to the development as a whole. Cohesion was also an issue in the configuration of the property, because the widths of the facades are based on those of the typical canal houses in Amsterdam. Baumschlager Eberle have kept to architectural tradition in the Netherlands in their choice of colours for the dark concrete facade and the contrasting window frames (green and beige). The canal houses also fit in well with the architectural concept devised by Baumschlager Eberle. The high rectangular windows let in plenty of light for the occupants.

The precisely articulated frame with its sturdy pilasters and vertically staggered stone joints inject rhythm into a rectangular facade that is supported by a fascinating arcade. Crowning the structure is the glass ellipse of a conference hall. Restrained plasticity, the ability to produce an unfashionable facade and the introduction of minor irritations, such as the ellipse and the zigzag in the arcade, combine to produce an architectural whole that manifests itself in a quite elementary and permanent manner in its urban setting. Inside, meanwhile, Baumschlager Eberle have opted for neutrality of use. The flexible office spaces have been inserted between the load-bearing facade and the access cores, which means they can be adjusted at any time to the varying needs of the users.

Aesthetic quality, durability and neutrality of use are the components in the architecture designed by Baumschlager Eberle that have a clear impact on the longevity of their buildings. Moreover, these long-life buildings consume fewer resources, thus enabling architecture to make a contribution to sustainability.