Save
Despite Controversy, Michael Maltzan Architecture's "Lens" Will Go On
Share
Or
Copy

Despite petitions and pending lawsuits against the project, the St. Petersburg City Council declared last night that Michael Maltzan Architecture's $50 million re-design of the city pier will go on.

The project, known as "The Lens," has hit speed-bumps due to local dissidents, who have been vocally wary of the new Pier's price-tag/design and have called for a voter referendum. However, the architects have been sensitive to the process; since first winning the competition in January (beating out both BIG and West 8), the firm has taken part in local workshops in order to get community input, making some significant changes to the original design.

After receiving local criticism that the Pier include more things "to do" and more shading, the firm has adjusted the design to include two restaurants, shaded balconies, and - in order to improve access - a road that can support service vehicles and a tram. Most noticeably, the plan for an underwater reef garden, the signature feature which gave the project its name, has had to be scratched: scientists have determined that a reef garden would be unrealistic with Tampa Bay's dark water.

Last night's 7-1 vote determined that the project will now receive funding in smaller, pre-approved increments in order to safeguard against potential legal complications. However, no mater the outcome, the closure and the demolition of the current St. Petersburg Pier will take place between May and August 2013; if all goes to plan for Michael Maltzan Architecture, "The Lens" will open in summer 2015.

See updated Renderings for "The Lens," and a really cool video, after the break... 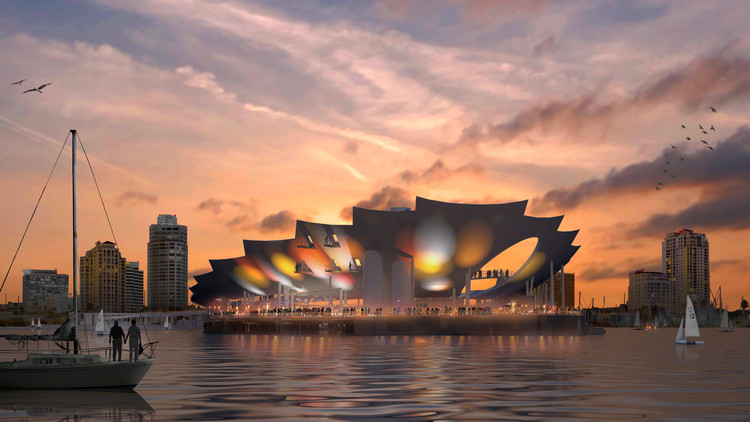 The Architects' description: Like a magnifying glass on the water, the Pier is a lens back to the city, and a window into the underwater world beneath. Twin bridges extend out and back, no longer unidirectional, but instead a circuit, allowing for a diversity of experience reflecting a more reciprocal relationship between the Pier and the surrounding waterfront.

This is a new space for collective experiences for individuals, families, and the residents of St. Pete to gather, to play, and to celebrate. Water is the icon, a vast amenity that defines the city in many ways. The Pier provides a host of both powerful and nuanced ways to experience the bay – its particular light, atmosphere, horizon, its nautical sociability, its renewed underwater life, an aquatic perspective on the city itself.

As its canopy rises over the Bay, the Lens incorporates bicycle and walking paths arcing upwards before returning to the water’s edge. Its broad form shelters the main promenade from the hot sun and the rain, welcoming visitors as they arrive on foot, on bicycle, or via the Pier Tram. Elevators and stairs bring visitors up to a series of viewing decks with unprecedented views of the city skyline in the distance.

An oculus inscribed at the far end of the loop opens and connects the world within the Lens and Tampa Bay beyond. At night, the surface of the canopy can become an extraordinary surface for video projection, for performance, and for art. Patterns of light, color or even clouds can track across its surface and will be visible from the Amphitheater and the surrounding city.

The canopy’s surface also plays an active role for sustainability. Built of precast white concrete panels, the canopy incorporates an array of micro turbines embedded in its surface, their patterned form taking advantage of prevailing winds and the canopy’s form. Solar panels are arrayed across the northwest edge of the bowl, their position optimized in relationship to the sun’s path. The canopy also captures and routes rainwater into collection cisterns embedded in the pedestrian pathway below.

The new Pier is a central element connecting downtown St. Petersburg and its waterfront park system. A series of east-west connections link the Pier to the heart of downtown St. Petersburg and Mirror Lake. A new promenade and sculpture walk extends the existing cultural and commercial axis to the north and south, supporting continued development along the water and linking the new Pier, the City and its waterfront.