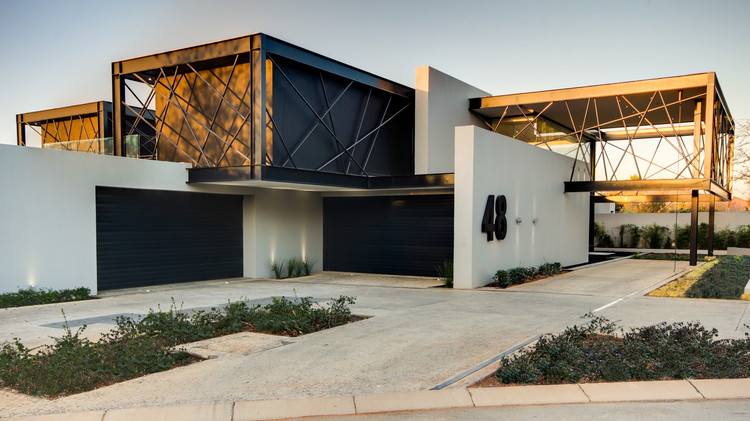 Text description provided by the architects. House Ber, the latest work by Nico van der Meulen Architects and M Square Lifestyle Design is an indication of what happens when granite, steel, light and water come together. Situated in Midrand, House Ber presents itself as a sequence of irregular steel bars randomly placed creating patterned façades which initially were conceived to represent security but now have become the very feature which distinguishes this house from its surrounding.

The house simply rectangular in form is structured around the living room as the centre of this home. Unimposing and nearly invisible, the frameless glass doors seamlessly separate the interior from the exterior. Thresholds’ being kept to a minimum leaves one wondering whether you have just stepped inside or outside.

Stairs disguised as Granite slabs punched with steel inserts, one cannot help but glide down the entrance hall into the living spaces.  M Square Lifestyle Design’s final product presents black steel inlays that are seen throughout the house in various forms. Ensuring that each room captured a feeling of transparency, M Square Lifestyle Design demonstrated their ability to work with materials in their purest forms, making use of natural products like marble floors and Caesarstone kitchen counter tops.  The illuminated ceilings highlight the contrasts between different textures and forms, leaving you in a state of anticipation as you move through this house. In keeping with the theme of randomly placed steel bars, the interior designers conceptualized a line drawn across the house linking all elements and spaces together. In doing so, they managed to create a feeling of connection that can be felt throughout the house.

M Square Lifestyle Necessities provided the final touch in furnishing this house with European furniture pieces and lighting to compliment the design, while Regardt van der Meulen’s sculpture livens up the space in its tri-dimensionality. 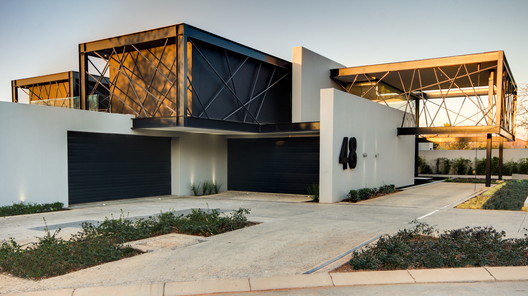