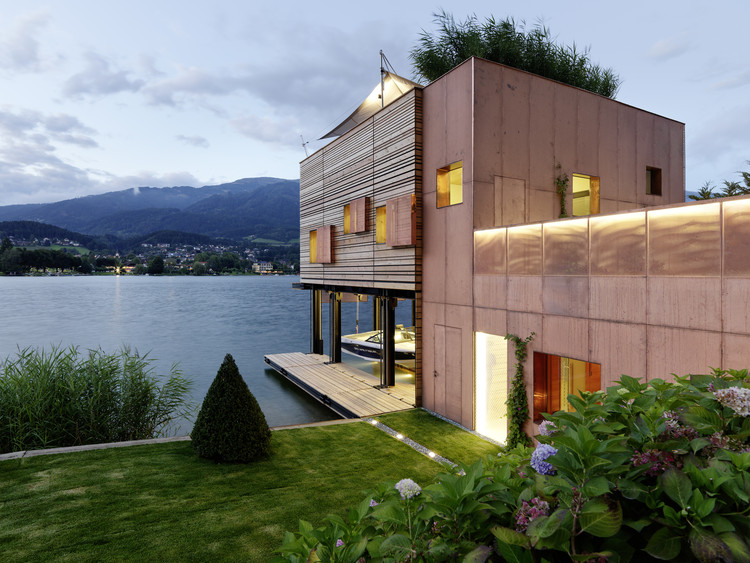 Text description provided by the architects. The boathouse was built as a solitary building at the Seebodner lakeside of the Millstätter lake in Carinthia. The location of the construction is characterized by the intersection line between water and soil, directly at the foot a precipitous slope in which also the remaining buildings of the property complex are situated. Due to their elevated position, those houses have an extensive view at the south and the west façade of the boathouse.

This distinctive location reasoned on one hand a complicated technical and constructional challenge, because it needed 10-metres-long drilling posts to reach weight-bearing subsoil to construct the basement. This approach that, due to the nature conservation and water rights notifications, was only achievable by using a base grade, an oil barrier and several other challenging measures.

On the other hand, this setup also meant an essential formative element in the development of the building design: the construction body subdivides itself into those parts of the building erected over water and those over ground, the original shoreline can be read off the two different materials in the facades. Moreover the wish for a grown appearing house, which in the course of the years is permanently variable in its appearance, stood in the foreground: thus it seems that the building, alike a reed belt, grows out of the water of the lake.

The components established over water manifest themselves completely in wood, while those established over soil are wrapped in a cover of expanded copper.Both selected materials, the untreated Siberian larch as well as the natural copper panels are subjected to a natural weathering process which gives the building an annually changing in its appearance, until the wood has turned completely grey and the expanded metal panels are totally covered with the green patina typical for copper.

The key signature design feature is “hidden” in the wooden façades: on account of an authority ban, which prohibited an outside footbridge for docking on to the boathouse at the west facade (although there has always been footbridge in the past), a system of facade-integrated folding elements was developed. The uniqueness of these folding elements lays in the fact that in contrast to the usually available folding elements, they can form a completely horizontal, passable surface. In the open position these gates make up the by authority eliminated footbridge in the west façade. On the ground floor of the north facade they establish the entrance gateways to the three boat moorings and also in the upper floor a platform over the lake. In addition, the infinitely variable adjustable folding gates also lead to a constantly iridescent overall impression of the building.

The spatial subdivision of the building reflects the strictly functional and comfort-related conversion of the space programme: located in the ground floor is, beside the three boat moorings, one for a motor-, one for a rowing and one for a sailing boat, the wellness area. The rooms of this area, sauna and steam bath, as well as the changing room, are assigned to the outside space and to the lake. In contrast the thermally separate upper floor accommodates the rooms for solarium, massage and fitness training, as well as a small tea kitchen and a relaxing area. The space sequence is rounded by a generous terrace on which the cultivated vegetation extends the reed belt of the lake shore. The three levels are connected by an open staircase which establishes the symbolical connection between the blue of the lake and that of the sky.

The attentive observer will recognise, that the design of the edifice and the planting arranging of the outside areas clearly reference to the formative elements of the existing buildings and vegetation, which have developed in a long time, without imitating these or repeating them undifferentiatedly. By doing so, this stylistically modern building concludes the architectural development of the property, which already stretches for several decades, in a contemporary manner.