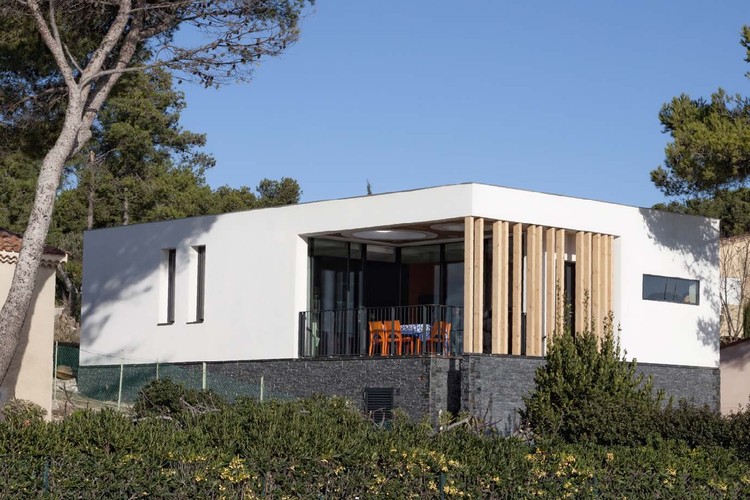 Text description provided by the architects. The project was sponsored by a family who wanted to make their summer home their principal residence for the year. 110 square meter of floor area on a plot of 561 square meter, located in the cove of Tamaris about 50 meters from the sea, in an environment of neo-provencal houses, the existing building was a house divided into two identical studios with a terrace East facing a campsite. The building is in aslope, the basement was converted into a laundry room available-cellar. The roof was tiled traditional . Access to plot is through a portal located east . Access to the house where the floor is raised above the ground on its eastern façade is via a staircase. (Up to about 250 cm)

The program simple enough, was to have one house with 2 bedrooms and orient the house towards the sea located in the South, all in a contemporary writing. Compared to the budget allocated want the client to the redevelopment of its new home (190 000 Euros), the party is taken to retain the majority of existing facades (by elevating only 60 cm) as well as stair access. Only the south-east part of the house is completely destroyed and rebuilt the house to open in the corner by creating a loggia redirected towards the sea Also in the interests of economy, the majority of existing openings has been preserved but they were enlarged on their height to give them a higher proportion "vertical".

For the roof, the existing roof tiles was completely demolished and replaced by a flat roof that covers the entire project, using the stairs for awning and the large bay window angle is set in the living room. To provide timely light more finely, two skylights were created in the new roof at the terrace. The angle of the bay window opens completely and allows visually create a diagonal between the kitchen and dining room, terrace and sea The soil is continuous between the terrace and the day part (stoneware tiles 50x100 cm), and the fact that the glass does not amount to a fixed angle, the terrace 14 m2 becomes an extension of stay. To protect the visual part of the day camp located east of the house, wood posts were established.

This shading has two functions. On the one hand, it hides the view east side serving screen, on the other hand, four of these are just 4 metal posts covered with wood that support the roof. The removal of these post gives a lighter side and air on the roof in the south-eastern corner. Distribution is quite simple, the day part is facing South-East, the rooms are oriented to the West. To minimize the visual height of the overall volume of the house, the entire underbody was treated by a different material, namely a slate veneer which runs throughout the house. To treat a hollow joint between the white plaster of the current part and slate underbody, a U-shaped stainless steel wraps around the entire house for separation between the two materials.

Access doors to crawl space and basement laundry-have been replaced by metal doors in painted steel in the same tone as the slate so that they visually disappear into the underbody.

At outdoor spaces, earthworks at the entrance of the plot helped expand the parking capacity of the house. The tall pine on the garden has also been preserved.

Production of cold and heat is a heat pump in the cellar. The recovery of water from the roof terrace is made by Plastic runs that pass inside the house hidden behind plasterboard boxes.

The writing of the house plays on vertical lines on the upper part (proportion of windows, wood posts, ..), and horizontal lines on the underbody of the house (slate veneer and steel doors). Only exception to the rule on the East side, a horizontal window allows to create a "picture" from the living room to the sea and the surrounding cliffs.

At the interior of the house, there is three entities volume day (lounge, dining room and kitchen)separate through games of ceiling and paint. The dining room is a "cube ripped" leaving an orange mark on the walls and ceiling . The living room is marked by a false ceiling disbursed in which are inserted four strips embedded randomly arranged. The path is then along the low voltage recessed spotlights. Along the bay window corner , there is a cornice plasterboard into which is inserted a strip LED. The bathroom was fully tiled from floor to ceiling tiles combining 80 x40 and 2x2 mosaic. Within this calepinage come to integrate two mirrors. The deck of the tub has been realized in wood. These are waste boards of the construction that have been recovered, varnished, and willing randomly .